The Gut Microbiome Affects the Brain, Eyes, and Gut in Mice

The effects on all three organs were substantial. 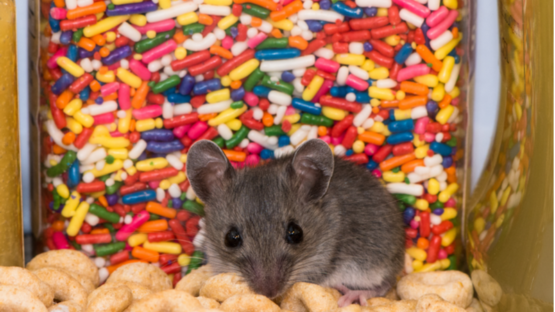 Publishing in Microbiome, a team of researchers has ascertained multiple physical effects of aging gut flora in mice.

The researchers used three groups of mice: young (3 months), old (18 months), and aged (24 months). Young and old groups were divided into a control group, an antibiotics group, and three recipient groups of gut flora from each of the different ages of mice. Aged mice, due to their limited availability, only had a control group and a recipient group of young gut flora.

The species of bacteria were analyzed, and the researchers found that young gut flora in mice is abundant in bifidiobacteria, while older mice have more prevotella species. However, the antibiotics that were used to allow for this fecal replacement also had strong influences on the bacterial composition of these animals.

Effects on the brain, eyes, and gut

Old mice seemed to have their brain inflammation reduced by a simple treatment of antibiotics, as both the antibiotics group and the old mice receiving old gut flora had Iba-1 levels below baseline; however, young gut flora decreased Iba-1 significantly below baseline, and aged gut flora increased it.

The data in aged mice, although limited in scope, were very clear: aged mice receiving young bacteria had much less Iba-1 brain inflammation than the control group.

Retinal data were also promising. Previous research has shown that gut bacteria have something to do with the development of age-related macular degeneration (AMD) [1]. The researchers show, for the first time, that the gut microbiome significantly affects the functional visual protein RPE65, flaws in which have been implicated in the development of AMD [2]. Young mice given old or aged microbiota had their levels of this protein significantly decreased, while aged mice given young microbiota had the reverse occur.

Gut markers were also promising. The epithelial barrier protecting the intestines from their contents can be eroded, and this phenomenon is known as leaky gut. A critical marker of this damage, I-FABP, was increased in mice receiving aged gut flora and similarly decreased in aged mice receiving young gut flora; the two groups had nearly completely switched places on the chart, suggesting that gut flora are almost entirely responsible for gut health, at least in mice. LPS-binding protein, another indicator of bacterial leaks into the gut, had very similar results.

A lack of behavioral effects

Unfortunately, while the brain biomarkers were significant, the behavioral study did not yield any significant results. The object recognition test that the researchers chose showed basically no differences whatsoever between aged mice at baseline and aged mice receiving youthful gut flora. The researchers mentioned two previous studies on this subject. One of them showed that young mice receiving aged gut flora had significant impairments [3], and the other suggested that behavioral changes only become visible over the longer term [4].

While altering the gut microbiome is by no means a panacea, it is one aspect of aging that is relatively easy to influence without gene therapies or even surgery. This paper adds to a broad body of research showing the relationship between gut bacteria and inflammation in other organs. Its potential influence on the development of eye diseases bears further investigation, and the effects on leaky gut were extremely promising. However, it is clearly not a quick fix for long-term issues, even in mice.