A group of scientists have shown that the SIRT2 protein increases the accumulation of amyloid beta, a known marker of Alzheimer’s disease (AD), in the brains of mice. They propose a mechanism underlying this phenomenon and demonstrate that inhibiting SIRT2 ameliorates AD-associated cognitive decline in mice [1].

AD is one of the most devastating age-related disorders. Despite considerable efforts and billions of dollars in funding, little ground has been gained in the war against AD. Its progression has been linked to the brain’s accumulation of amyloid beta (Aß), a peptide that forms plaques that are abundant in people affected by this disease. Recently, the theory that AD is caused by those plaques took a hit after numerous drugs that targeted Aß accumulation had failed in trials. Still, more such drugs are in development, and targeting Aß remains a legitimate anti-AD strategy [2].

Sirtuins, on the other hand, have been hallowed as longevity promoters. This extremely ancient family of proteins performs numerous functions in our body. SIRT2, a member of this family, helps to maintain genomic stability by deacetylating histones, the bulky proteins that chromatin is wrapped around. After gene transcription, deacetylating histones helps chromatin return to its tightly wound form, where it can remain stable despite various environmental threats. Overexpression of SIRT2 has been shown to extend lifespan in various organisms [3].

The current study may come as a cold shower to sirtuin enthusiasts, since it demonstrates that SIRT2 levels positively correlate with Aß accumulation in the brains of mice. This is not the first study to establish such a correlation, but, in this case, the researchers have also discovered the pathway by which SIRT2 seems to boost Aß production.

The researchers have found that pharmaceutical repression of SIRT2 deacetylation activity lowers the load of Aß in the brain and ameliorates cognitive decline in an AD mouse model. This can be explained with a look at the mechanism behind the creation of Aß. Aß forms when the transmembrane protein APP (amyloid precursor protein), which usually performs beneficial cellular functions, gets cleaved in two places by two different enzymes. Aß is the short chunk that remains. 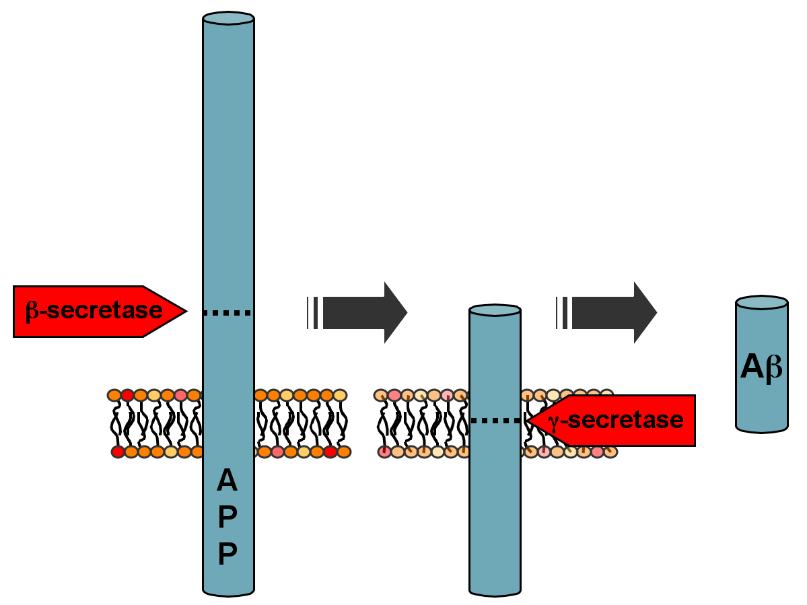 One of the enzymes is called BACE1 (ß-secretase in the illustration). The scientists have found that SIRT2 activity inhibition reduces the expression of BACE1. As a result, fewer APP cleavages occur and less Aß is produced. To further test this connection, the researchers created genetically modified SIRT2-lacking mice and found that the depletion of SIRT2 significantly reduced BACE1 levels in both the hippocampus and the cortex.

However, there is no direct mechanism by which SIRT2 can influence BACE1. To find the intermediary, the scientists first flagged a total of 285 SIRT2 potential binding partners. Five among them also happened to be AD-related, with one, RTN4B, bearing a direct relation to both SIRT2 and BACE1.

RTNB4 is a member of the reticulon family of proteins, which gets its name from being found mostly in the endoplasmic reticulum. Reticulons are known to block the access of BACE1 to APP. An increase in the expression of reticulons has been shown to substantially reduce the production of Aβ [4]. Experiments have shown that SIRT2 and RTN4B are co-localized in cells and overexpression of SIRT2 reduces RTN4B levels. Confirming the relation, increased RTN4B expression was detected in the hippocampus and the cortex of the SIRT2 knockout mice.

Apparently, RTN4B has a deacetylation site that invites SIRT2 to do what it does best: deacetylate. However, removing the acetyl group from RTN4B makes it easier for another protein called ubiquitin to degrade RTNB4, which impairs the latter’s ability to mediate BACE1. As a result, more Aß is produced.

In accordance with the Aß theory of AD development, mice treated with a SIRT2 inhibitor, which granted them lower levels of Aß as a result, also showed less cognitive impairment than their untreated peers.

Since these results were achieved by a simple pharmaceutical treatment (intracutaneous injections of the SIRT2 activity inhibitor AK-7), the authors of the study suggest that it can serve as a base for the development of novel anti-AD drugs.

The results of this study underscore the multi-faceted character of cellular chemistry. As we see here, deacetylation, while promoting genomic stability, can also drive Aß production later in life. Hence, much caution is needed when developing novel drugs and anti-aging agents. It is also possible that the antagonistic pleiotropy theory of aging is at play here. This theory postulates that the same genetic mechanisms may be beneficial earlier in life (SIRT2 deacetylating histones) and deleterious later in life (SIRT2 deacetylating RTNB4). Such mechanisms still get selected for reproduction, since their harmful effect is not felt until after the reproductive period is over.