What Is the Golgi Apparatus? The Golgi apparatus is a membrane-bound organelle found in most eukaryotic cells. It is also known as the Golgi complex or the Golgi body. It was named after its discoverer, Camillo Golgi, an Italian biologist.

Structure of the Golgi apparatus 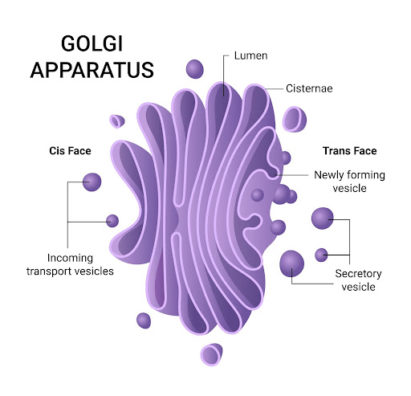 The apparatus is composed of five folds known as cisternae. These folds have special enzymes and create five distinct regions, which modify proteins passing through in specific ways.

The regions are as follows:

The cisternae are held in place by matrix proteins, and the entire organelle is supported by a web of microtubules. These are tubular structures made from globular proteins called tubulins. Functionally, they form the rigid components of the cytoskeleton that give shape to many cells.

The organelle functions as a factory and distribution center in which proteins received from the endoplasmic reticulum are sorted, modified, and prepared for transport to their final destinations.

These modified proteins are packed into vesicles prior to their secretion. In biology, a vesicle is a bubble-like structure inside or outside a cell that is made of cytoplasm or another liquid and enclosed by a lipid bilayer.

It is also involved in the transport of lipids around the cell and the creation of lysosomes. Lysosome enzymes are created by proteins from the endoplasmic reticulum and packed into vesicles by the Golgi. In this way, it is an important part of the autophagy process, the ultimate recycling system of the cell.

The proteins and lipids arrive in jumbled clusters of fused vesicles. They reach the organelle by travelling along the microtubules through a special transport compartment known as the vesicular tubular cluster. This travel conduit connects the endoplasmic reticulum and the Golgi apparatus.

Once they arrive at the cis face membrane, the vesicle clusters fuse with it. The contents are then delivered into the lumen region. As they pass through the organelle towards the trans face, they are modified into working and useful molecules by the enzymes in each region. They are then tagged for delivery to either intracellular or extracellular locations.

The vesicles leave by exocytosis, a process in which a cell transports them out of the cell. The protein packages then travel to nearby or distant target cells to deliver their protein packages, which act as a form of cell-to-cell communication.

Some proteins packaged by the Golgi are involved in the regulation of autophagy through their creation of lysosomes. It is also known that disruption to the autophagy process can harm Golgi function. Aberrant autophagy has been shown to be linked to neurological diseases.

Therefore, therapies that protect the Golgi or correct any harmful packaging of the packaged proteins may help to prevent autophagy-related neurological diseases [1]. On a related note, it may also help address apoptosis-related diseases [2].