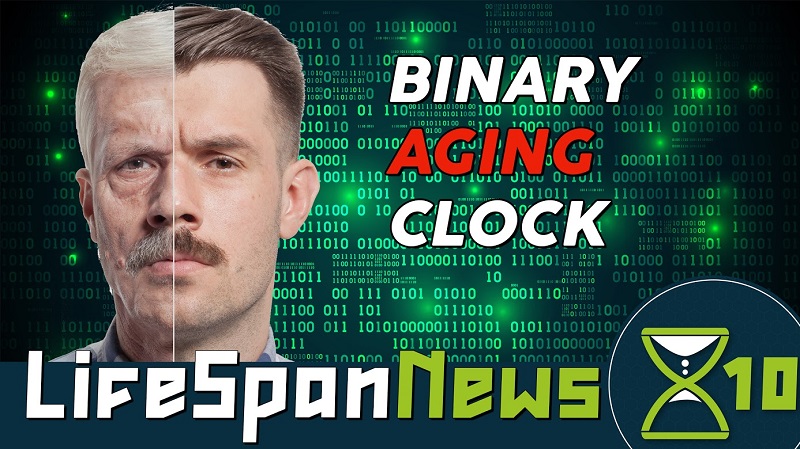 This week on Lifespan News, Brent Nally discusses a binary clock for predicting biological age, the growing number of startups focused on aging, Lifespan.io’s seventh birthday, CAR T-cell therapy against multiple myeloma, and the effects of CBD on Alzheimer’s disease.

We Celebrate Our Seventh Birthday

When most people think of measuring one’s age, they think of chronological age. For example, we’re releasing this video on March 16th, 2021, which also happens to be my 36th birthday. But how old am I really from a biological and scientific perspective? Well, there’s many ways to measure aspects of biological age, and we’ve reported on aging clocks here on Lifespan News. Our first story is about a new, interesting, transcriptome-based aging clock. We’ll have this story and more in this episode of Lifespan News.

Continuing with our first story, a new binary clock predicts biological age. This binary clock deals with absolutes rather than percentages. Scientists have recently developed a new aging clock that is transcriptome-based instead of methylation-based. Aging clocks are tests that attempt to determine a living creature’s biological age as opposed to chronological age: aging clocks can tell how quickly the body is aging. DNA methylation clocks have been extremely popular over the past few years. DNA methylation clocks measure the levels of methylation of DNA, which are known to decline with age. Methylation happens when a chemical known as a methyl group attaches itself to a gene, silencing the gene’s expression and preventing the gene from being transcribed into a protein. As methylation declines with age, this means that genes that shouldn’t be active are switched on, leading to unwanted gene transcription that can be harmful. The new clock is based on transcription levels instead of methylation. The new clock was tested on C. elegans worms, which mostly lack DNA methylation. After training an AI on 900 worm transcriptomes, the scientists tested it on another 100 worms. The clock was set up to consider only whether the level of transcription of each gene involved was above or below average, rather than on exact percentages. This binarized the clock and made it possible to discard a lot of noise from the analysis. The clock proved very accurate: it correctly predicted the lifespan-altering effects of genetic variations, environmental factors, various stressors, and combined effects of different drugs. The same method was also applied to human transcriptomes, and it proved superior to similar but non-binarized methods. Hopefully, this method will be an improvement over our existing methylation clocks and help better determine an organism’s true biological age so we can better test what things may slow, stop or even reverse biological aging or accelerate biological aging.

Our next story is a roundup of news coming from various longevity companies over the last few weeks. Chromadex, which manufactures the supplement nicotinamide riboside, or NR, which is a precursor of nicotinamide adenine dinucleotide, or NAD, announced that it has agreed to a securities purchase agreement for the sale of 25 million dollars of its common stock in a private placement. Next, digital health company Bold received 7 million dollars in seed funding from Andreessen Horowitz, Khosla Ventures, Primetime Partners, and Gingerbread Capital. The funding will help to get the company set up and primed for growth in what is a rapidly expanding market for digital wellness and healthy longevity services. Next, rejuvenation biotechnology startup founder Kizoo has provided Elastrin, a company that focuses on removing calcification from tissue, with seed funding. The press release said that “the Elastrin team has developed a platform that can restore vascular health by removing pathological calcification, specifically from sites where elastin has been degraded.” Next, a new incubator for longevity companies was launched in Switzerland. The new company, Maximon, plans to “start several companies per year and provide a comprehensive set of resources that empowers founders to focus on and create superior services and products and execute at speed on a global scale.”

By the way, Lifespan News is released every Tuesday at noon Eastern time while our other science and advocacy X10 videos are released every other Monday, also at noon Eastern time. We encourage you to subscribe to our X10 Youtube channel. Once you’re subscribed, be sure to click the notification bell and select “All Notifications” to ensure you don’t miss any videos. Now back to the news.

Lifespan.io just turned 7! A lot has changed over the years: Lifespan.io grew from a small, volunteer-based organization into a larger and better-funded one running several important initiatives to speed up longevity research and raise awareness on the problem of aging. Still, there’s really no such thing as “Too well-funded”, and with a larger budget, Lifespan.io could do a lot more; that’s why we’re asking you to consider becoming a Lifespan Hero by pledging a monthly donation. We’re very close to our $10,000 goal, and with your help, we can get there! Find out how to become a Lifespan Hero in the description below.

Moving on, CAR T-cell therapy generates lasting remissions in patients with multiple myeloma. CAR-T-cell therapy has induced deep remission in myeloma patients who had had relapses from several previous therapies. Multiple myeloma is a cancer of white blood cells responsible for the production of antibodies. It’s one of the most common blood cancers in the US. Typical therapies against multiple myeloma include immunomodulatory drugs, proteasome inhibitors, and anti-cd38 antibodies. The new treatment, called idecabtagene vicleucel, or ide-cel, is a CAR T-cell therapy, so it involves harvesting the patient’s own immune T-cells and modifying them to express a receptor that can bind to specific cancer cell proteins. The modified cells are then infused back into the patient and go on to locking onto cancer cells and destroying them. The protein targeted by ide-cel is called B-cell maturation antigen, or BCMA, and it’s very specific to myeloma cells. Almost 75% of the patients in the ide-cel trial responded to the therapy, and one-third of them had a complete remission. Both the observed rates and the duration of the responses were significantly better than other currently available therapies for patients with multiple relapses. The scientists are now seeking to launch trials of the therapy in patients in earlier stages of the disease.

For our final story, CBD reduces plaque and improves cognition in model of familial Alzheimer’s. A two-week course of cannabidiol, or CBD, helps normalize and restore the function of two proteins associated with reducing amyloid-beta accumulation in mouse models of familial Alzheimer’s disease. CBD also reduces levels of IL-6, an immune protein associated with inflammation in Alzheimer’s patients, according to research from the Dental College of Georgia. The researchers gave cbd to a mouse model of Alzheimer’s and then used behavioral tests and immunoassays to evaluate cognitive and motor performance of the mice. The researchers report that the treatment “enhanced IL-33 and TREM2 expression, ameliorated the symptoms of AD, and retarded cognitive decline.” The behavior of the mice also improved following the treatment.

That’s all the news for this video. Before you go, there’s a few quick, free and simple things you can do to help us solve the human aging problem. If you haven’t already, please like this video, share this video on social media. Make sure you’re subscribed with the bell turned to All Notifications to ensure you don’t miss any videos. Is there a recent life extension story that you think we should have included in one of our recent videos but haven’t yet? And which of the stories from this video excited you the most? Let us know what you think in the comments below. We really appreciate it, and we look forward to seeing you in the next episode at least as healthy as you are now.