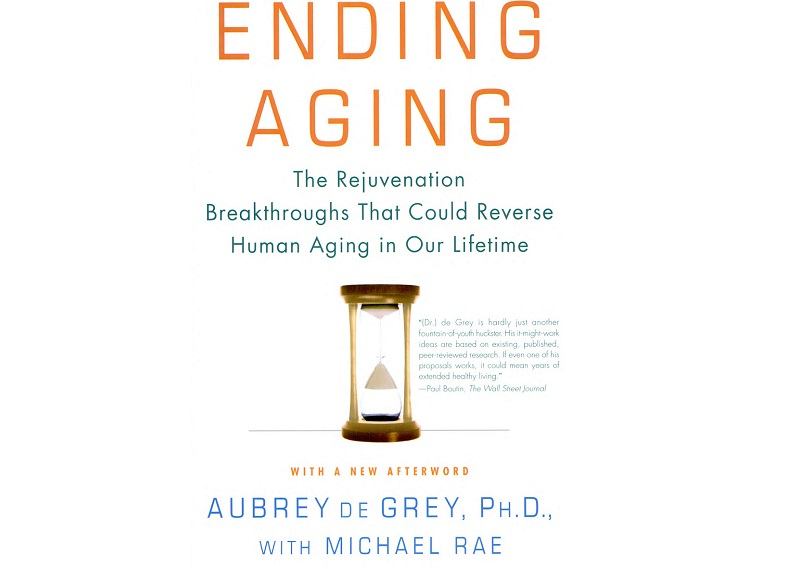 The book I’m reviewing today is pretty much a classic by now. Published for the first time in 2007, “Ending Aging” by Dr. Aubrey de Grey is not only “an audacious blueprint for cheating the reaper”—as Janet Cromley of the Los Angeles Times put it—but also a manifesto, a call to arms, if you will, openly denouncing biological aging as public enemy number one and explaining why and how we should and could put an end to it.

Dr. de Grey’s enthusiasm and confidence are often regarded with skepticism by people who are new to the idea of defeating aging, and while initially the scientific community wasn’t persuaded that the SENS “maintenance approach” was even worth discussing, this paradigm has been confirmed by other academics and is shaping the rejuvenation biotechnologies of tomorrow.

Like every rejuvenation advocate eventually learns, a conversation on the defeat of aging with a newbie is composed of roughly three parts: explaining why aging is a problem, explaining what aging is and how we may conquer it, and finally, addressing the inevitable concerns of the audience. “Ending Aging” does a great job of the first two parts, though it dedicates only little to the third one, replacing it with a more pragmatic discussion of what needs to be done, in terms of advocacy and policy-making, in order to get from here to a world free of age-related diseases. Dr. de Grey normally addresses typical concerns about extended longevity (overpopulation, eternal dictators, inequality of access, and others) with two general answers without going into the finer points of each specific concern, as he understandably believes that eliminating diseases and saving lives is an absolute priority and no excuses can justify delayed action to address it—or worse, failing to address it altogether.

My personal feeling is that the book might have benefited from even a brief section dedicated specifically to the details of the most common concerns; as it is, “Ending Aging” may well persuade readers that defeating aging is feasible and desirable, but unaddressed worries of some people might deter them from wholeheartedly joining or supporting the cause. Then again, I understand why Dr. de Grey might prefer dedicating more attention to the scientific and technical aspects of the issue and leaving the discussion of related but peripheral matters for more appropriate venues.

Although the book presumes little to no knowledge of biology and goes to great lengths in attempting to make the topic accessible to everyone, its tone is never condescending; rather, it’s friendly, engaging, and peppered with humor, making the readers feel as though they were all part of a single team trying to take aging down—which reflects de Grey’s conviction that only with sufficiently widespread support across the globe can the crusade against aging eventually succeed.

Being aimed at non-specialists, “Ending Aging” is rather non-technical, although the second part—which describes SENS’s seven damage categories and the proposed regenerative interventions against them—can be difficult to get through. Simplified as it may be, it is full of details, and there’s a lot going on that the reader will need to keep track of; I can tell from experience that a second readthrough is very helpful. Readers with strong biology backgrounds will probably wish to investigate further, and they may do so via the extensive references provided at the end of the book or by getting in touch with de Grey himself—which he explicitly invites readers to do, should they have any questions.

While “Ending Aging” is not the first book discussing medical advancements that may spell the end of aging as we know it, to my knowledge, it is the only one so overtly endeavoring to change the public’s perception of defeating age-related diseases from a purely scientific quest fueled by vanity into a global, humanitarian cause. Dr. de Grey correctly identifies the current, skewed perception of aging as something necessary and even desirable and enjoyable as the biggest roadblock on the way to a healthier world, and his book is only part of his efforts to remove this roadblock through advocacy.

Personally, I believe that, without Dr. de Grey’s work, the popularization of rejuvenation biotechnologies might well have been slowed down by decades. In particular, it was this very book that pushed me to become an advocate and grow an interest in biology; for this reason, I think it’s a must-read for every supporter of the cause and a recommended read for just about anyone who’d rather be healthy than sick at any age.

Using an Endemic Virus as a Gene Therapy for Life Extension
0 Comments
In a study printed in PNAS, researchers have shown that telomerase reverse transcriptase (TERT) can be given to cells in living mice through a viral vector, taking […]
Posted in: News
Tags: Cytomegalovirus, Gene Therapy, Telomere Attrition

NMN Boosts Effectiveness of Immunotherapy in Mice
0 Comments
In a pre-print paper, scientists have shown that treatment with NMN increases the survival and anti-cancer efficacy of CAR-T cells [1]. The problem with immunotherapy T cells are a central element of the […]
Posted in: News
Tags: CAR-T, Immunotherapy, NMN
Stay Connected