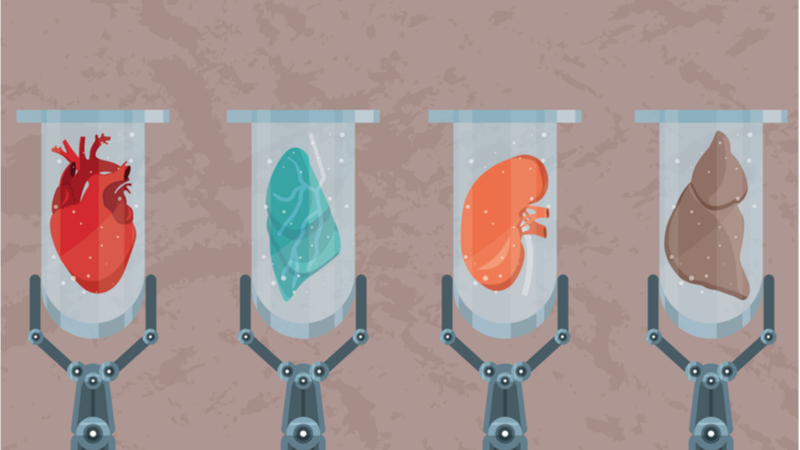 The ability to create synthetic organs has long been desired in medicine. If we could make synthetic organs for patients from their own cells, we could replace injured or damaged organs without risking the body rejecting the organ. This would have huge implications for the treatment of liver and kidney diseases, among others. For years, scientists have tried to perfect this technology but have been unable to solve the blood flow problem that has made the creation of synthetic organs impossible.

In the last few weeks, a group of scientists appear to have found the solution to this problem or, at least, a major part of it [1].

The creation of synthetic organs has always been prevented by one major problem: blood flow. While scientists have found out how to create functional tissue for multiple organs, they have been unable to create blood vessels in those tissues. Therefore, these created tissues are unable to accept bodily oxygen if they are even a millimeter thick, effectively suffocating the tissues and causing them to die from the inside out.

It is for this reason that most research in this field has focused on the creation of extremely thin tissues called organoids, which are only a fraction of a millimeter thick so that they can be implanted and have an effect on the body without dying. Unfortunately, while this may work for some organs with functions that do not completely rely on their structure (e.g. the liver), it is unlikely to work for other organs, such as the heart and kidneys.

Is there a solution?

Thankfully, a method called SWIFT provides a breakthrough that allows the survival of thicker tissues [1]. Although it still has significant room for improvement, SWIFT is a major step toward a future with rejection-free and on-demand organ transplants.

First, stem cells are produced and mixed with a solution containing collagen I: a form of structural protein that can exist in liquid at low temperatures but turns into a solid gelatin-like form at higher temperatures. At this point, extremely thin organoids called “organ building blocks” are formed. They are then stacked and crushed together using a centrifuge and a mold to form any desired shape. The created structure is self-healing, allowing the next step to take place without causing damage.

At this point, a nozzle that releases gelatin is inserted into the organ. The nozzle can be moved in order to create a complicated structure that will become the future circulatory system, and it can even contain branching paths. Finally, the nozzle is removed and the synthetic organ is warmed, solidifying its structure. The gelatin can then be removed from the organ, leaving a functional blood vessel. Endothelial cells, the normal cells that form blood vessel walls, can then be sent through the structure within a fluid and integrate with the structure. Tests have shown that tissues containing this structure can survive when they would otherwise be destroyed by suffocation.

While impressive, this system still has its weaknesses. Perhaps most significant is that despite the cells in these organoids surviving, a full 95% of them do not mature. This will massively reduce the quality of any synthetic organ until this issue can be fixed.

While endothelial cells can be made to line the artificial blood vessels, this does not yet work in all cases, as only parts of the vessels are coated in endothelial cells, while other parts are left uncovered for reasons yet unknown. The authors of the study have realized many of these flaws and have said that they are working to find solutions to insufficient cell maturation and incomplete endothelial cell linings. However, they have not discussed methods of coating the blood vessels with smooth muscle, meaning that the body would be less able to control blood pressure in these vessels, like it would in a normal artery or vein. It is likely that no progress is being made in this area yet.

Despite still having a few problems, a solution is finally in sight for the long challenge that has constantly gotten in the way of synthetic organ development: insufficient blood vessel formation.

Now that the start of an answer to a decades-long riddle has been found, we can only hope that the hardest part of the puzzle is behind us and that we will quickly solve the rest of the issues holding back the creation of synthetic organs. Either way, this step is a sign of major progress, bringing us that much closer to a future of on-demand synthetic organs.