Sarah Constantin on the Daphnia of Daphnia Labs 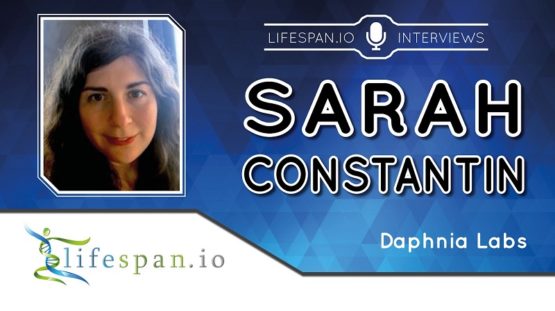 We recently had the opportunity to catch up with Sarah Constantin, one of the founders of the new biotech startup company Daphnia Labs. The company is developing a new platform for the discovery of geroprotective drugs: in vivo phenotypic screens in model organisms. The company plans to use high-resolution video to track Daphnia during its lifespan in order to screen for drugs that might extend healthspan.

Can you tell us a little about the company, its founders, and what motivated you to start this biotech company?

I’d been working for about a year at the Longevity Research Institute, which is a nonprofit that funds aging research. LRI focuses on trying to replicate studies on interventions that have been reported to extend lifespan in mammals. Basically, of the 50+ compounds out there that have some mammalian evidence for an anti-aging effect, which ones have the best chance of being viable geroprotectors in humans?

We wanted to expand to doing a high-throughput screening program in a short-lived model organism, because, really, the surface has barely been scratched in terms of searching for aging-modulating small molecules, and this is the kind of research program that machine learning and automation can really help with.

Initially, I imagined we’d do this with C. elegans, but then, fortuitously, I met Leon Peshkin, a systems biologist at Harvard Medical School, and he convinced me that Daphnia was a better pharmacology model organism.

Then, we started getting the advice that this made more sense as a business than as part of a nonprofit, because if we’re looking at novel compounds, that has the potential to generate IP. So, I incorporated Daphnia Labs as a public benefit corporation.

You have chosen to use Daphnia as your model animals for drug discovery; can you explain what things in particular made you decide to use them?

Well, Daphnia are short-lived. They live about a month on average. So, you can do lifespan studies with a fast turnaround time.

The natural point of comparison here is with C. elegans, which are a traditional aging model organism and also short-lived, but they’re more a genetics model organism than a pharmacology model organism. They live in dirt, and they have a very powerful xenobiotic system to excrete toxins. So, if you dose them with a drug, they’re very good at remaining unaffected, which means that drug screens on C. elegans are maybe less predictive of mammalian results than drug screens on Daphnia would be, certainly less predictive of toxicity.

Daphnia survival is actually a standard test for ecological toxicology: to test if something’s safe to put into the water supply. Daphnia are extremely sensitive to toxins, and they’re already used to predict toxicity in humans.

They’re also capable of both parthenogenesis and sexual reproduction. So, they’re exact clones by default, no genetic uncertainty, but you can also get a single generation cohort by giving them a chemical that makes them produce males.

How similar are daphnia to humans in terms of how they age and their genes, organs, and physiology?

Daphnia have about 60% of genes in common with us, roughly the same as a fruit fly, a bit more than a worm. They have a lot of the same organs — they have a chambered heart, a gut, a brain, etc. They have an innate immune system.

They also have homologs of a lot of well-known aging-associated genes: IGF1, Hsp70, FOXO, TOR, SIRT1, etc. There are pathways that are conserved across pretty much all animals, and they seem to exist in Daphnia as well.

We know Daphnia age because their mortality rates increase with time, just like ours do. They die of different things than humans do — usually intestinal malfunction — but they do become less mobile with age, just as most animals and humans do. There’s actually a big literature about the evolutionary biology of Daphnia life-histories, because you have these different genetic populations that arose in different ponds, and you can see that Daphnia live longer when they’re under less predator stress, for instance.

Often, at the early stages of drug discovery, C.elegans are a commonly used model animal. However, traditional manual and even automated drug screening is often time consuming, laborious, and costly. How does your system propose to change this paradigm?

Daphnia are really well suited to an automated approach because they’re easy to visualize. They’re transparent, and they’re large enough to see with the naked eye. With a high-resolution video camera, you can track their motion and some features of their physiology automatically. There’s no need to poke them like you do with worms; you just leave them alone in their water and gather video.

You are proposing to use daphnia as a novel in vivo screening platform; how does this differ to more traditional in vitro screening approaches, and what advantages does it offer?

The advantage is that you’re looking first for a functional phenotype — healthy lifespan — instead of starting with a target. For a problem as multifactorial as aging, it’s very unlikely that we’ve identified all the possible targets involved already. Many of the known aging-modulating drugs already seem to have multiple targets and mechanisms of action. A living organism is not the same as a cell culture; it’s got multiple tissues and hormones that affect the whole organism, so testing in culture isn’t necessarily representative of what you’d see in an organism. Screening for lifespan and activity in living animals means that you can get better prediction of what will work in a mammal than you’d get in an in-vitro screen.

You are using machine learning to screen for geroprotective drugs; can you give us an overview of how the system works and how it identifies promising molecules?

The machine learning is for analyzing the video of Daphnia. From each image, you can extract outlines of individual Daphnia and track their motion. You can also discover features, motion patterns, that correlate with age or mortality. If you do this with many tanks of Daphnia, each testing a different molecule, the ones that make Daphnia live significantly longer, stay active longer, or have motor patterns associated with youth are the geroprotective ones.

Could using machine learning reduce R&D costs for drug development, and in what ways?

If you can predict what will and won’t work in mammalian studies, you can rule out some of the failures earlier and have a higher hit rate on the studies you do conduct. Our calculations say that this could cut preclinical research costs in half.

If this means you can afford to do more mammalian studies, then you can get second-order effects — being more selective about which compounds you take into clinical trials and improving the clinical trial success rate. Since human trials cost tens of millions of dollars and only one in twenty drug candidates succeeds in the clinic, anything that improves predictive validity is a huge cost savings.

Your pipeline proposes to begin by screening 1000s of compounds via your daphnia system, then moving to compound analysis of potential candidates and finally onto mouse studies. What kind of potential candidate hit rate would you anticipate at the initial daphnia stage, and how does that compare to traditional methods?

The closest analogues are the lifespan screens that came out of the Petrascheck lab on C. elegans, including one on compounds with known mammalian bioactivity. A full 5% of those drugs significantly extended worm lifespan. Our expectation is that the hit rate in Daphnia of the same pool of drugs would be comparable or greater.

There isn’t really a direct comparison here with traditional methods, because target-based methods that are looking at binding affinity usually start with a screen of millions and a hit rate of less than 0.1%.

You would screen with the daphnia and generate around 10-20 good candidates for the mouse testing phase. What sort of mice would you be using, and why?

How far has the company developed so far, and what are your next steps into 2020?

Currently, we’ve built a prototype, generated our first data, and are working on experiments to validate Daphnia’s response to known aging-modifying interventions — do they live longer when you give them things like rapamycin and metformin, which make many other animals live longer?

As we go into 2020, we’ll aim to raise our seed round and start scaling up the screening device and software.

Is there anything else you would like to tell us about Daphnia Labs?

We’re always looking to talk to experts in the fields we’re working on. Currently, we’re especially interested in hearing from aquaculture experts and lab automation engineers.

Daphnia Labs
About the author