Some people worry that increasing healthy human longevity will create a gerontocracy. Suppose there was a country ruled by an evil dictator. Further, suppose the entire world was plagued by a terrible disease affecting 100% of the population. The disease isn’t infectious, but it is congenital. It progresses extremely slowly over the course of several decades, but it eventually ends up severely impairing one’s quality of life, and it is always fatal; it’ll take its own sweet time to kill a patient, but it always will, and it isn’t going to be fun.

If it was suggested that a cure for this disease should not be developed so that we could be sure the aforementioned dictator will eventually pass away, would you agree? Would your answer change if you lived in that country?

If I had to bet on your answers, my money would be on “no way” for both questions, and your reasons would probably be not too different from mine below.

Quite the raw deal

Let’s be pragmatic about this. If we did not develop a cure for the disease of my example, the benefit we would get out of it would be that eventually we’d get rid of the tyrant, or possibly many tyrants, if we assume there were many around the world. Now, does this benefit outweigh the downsides of this course of action? It depends on the downsides, which should all be pretty obvious. First, there are overwhelmingly more “normal” people than tyrants and dictators. Left uncured, the disease would make the lives of the latter miserable and eventually kill them, but it would do the same to the former, innocent “normal” people, including those who live under the tyrants.

The deal doesn’t seem too convenient, even for people who would directly benefit from the death of their oppressors, and it is even worse for those who wouldn’t; if you lived in a peaceful, democratic country, would you not have a problem with the idea of coming down with the disease and dying of it, for the sake of ensuring the death of a handful of tyrants who don’t even pose a direct threat to you? I didn’t think so.

Second, even if the tyrants are dead, this is not granted to put an end to the tyranny, which is the true goal here; whether or not the tyrants are dead doesn’t really matter, as long as they aren’t able to oppress people, and since the disease is, as said, extremely slow to kill, the tyrants have had all the time in the world to either leave an heir or nominate a successor. Long story short: the disease may well kill the tyrant, but not necessarily the tyranny, in which case, not curing the disease would amount to pointless, unspeakable suffering and deaths worldwide. Again, not exactly a bargain.

Third, the high costs and low benefits—not to mention the high chance of failure—of this “strategy” to get rid of tyrants make it even more unjustifiable when you consider the alternatives. If the goal is ending the oppression on the people perpetrated by a dictator, it seems more logical and effective to orchestrate an attack to arrest or kill them than wait until the disease gets them—especially given how slow the disease is.

The longer the wait, the more the suffering caused by the dictator, not to mention the suffering and death caused by the disease in the meanwhile, not only in the oppressed country but also everywhere else in the world. Granted, overthrowing the dictator is probably easier said than done, but it is still a better and more likely successful option than sitting around and waiting.

I’m reasonably sure you think all of this is a no-brainer, but you’d be surprised how often this no-brainer becomes an all-brainer for a lot of people when the disease is aging and the cure is rejuvenation biotechnology.

From general to particular

It all checks out: far worse than a disease, aging is a chronic process of damage accumulation that leads to a vast array of non-communicable diseases. While not everyone will get all of these diseases (because some of them will kill the patients before they can get the others), the process of aging affects 100% of the population, causing diseases that lead to a significant worsening of the quality of life and ultimately to death. The diseases of aging could be prevented by interfering with their root causes—the hallmarks of aging—by means of rejuvenation biotechnologies.

While, in the case of other diseases, everyone would agree for the reasons above that ensuring the death of tyrants is not a good rationale not to develop specific cures, many fail to notice that those very same reasons apply just as well to the case of aging. This double standard is possibly due to two facts.

The first is that aging happens to everyone, so tyrants too are guaranteed to die of it if not of something else, whereas this isn’t true for other diseases; not developing a cure for a non-age-related disease, in the hopes that a tyrant might catch it and die of it, rightfully seems a ridiculous game of chance with certain losses and a rather unlikely payoff.

The second is that, with aging out of the way, a tyrant could potentially live for an indefinitely long time, so the perceived risk is that of an everlasting dictatorship. However, waiting for the tyrant to die of old age is also a ridiculous game of chance, namely the chance that, over such a long time, the tyrant wouldn’t manage to find someone to replace them and carry on the tyranny despite his death.

Additionally, if history teaches us anything, it’s that when a dictatorship ends, it’s rarely because the heart of the dictator decided to stop beating of its own accord; rather, it’s generally other people who, in one way or another, make it stop, or at least force the oppressor out of the country.

Many would be tyrants throughout history have gotten their just desserts from their disgruntled people. Examples such as Benito Mussolini, Napoléon Bonaparte, Adolf Hitler, King Charles I, Rasputin, Emperor Nicholas II, Pol Pot, Idi Amin, Mobutu Sese Seko, Nicolae Ceausescu and Slobodan Milosevic all serve to remind us what happens to the majority of tyrants.

Of course, there are some exceptions to the rule, with Stalin and Castro living till old age finally killed them despite a number of attempts to assassinate them. However, given a longer life, it seems unlikely they would have continued to dodge the bullet indefinitely and avoid assassination.

This is why rejuvenation biotechnologies are unlikely to lead to eternal dictatorships, but it is not the only reason; another, crucial reason is that democracies have been on the rise throughout the past 200 years, and autocracies began plummeting in the mid-70s and continued falling through the following decades, after a rise happened after the Second World War. 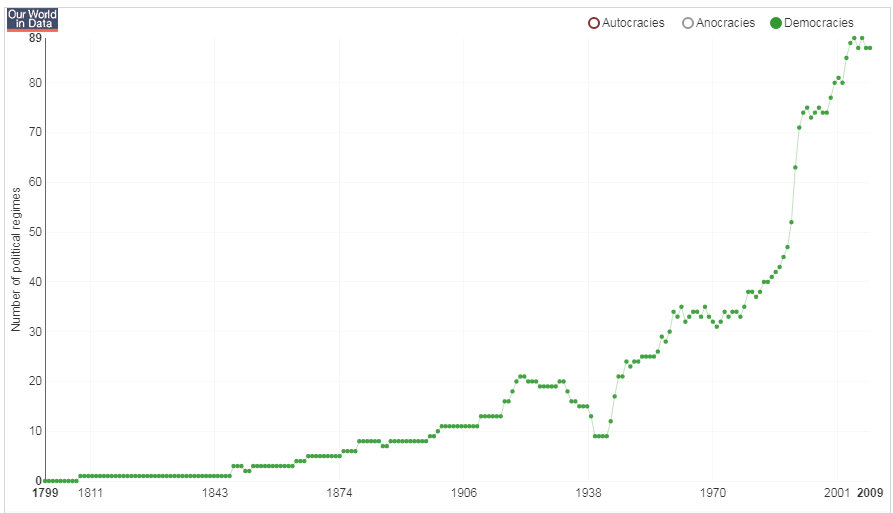 The chart below is a world population breakdown by political regime of respective countries. As the source points out, four out of five people presently living in an autocracy live in China, which emphasises the fact that, although the autocracy share in the chart above is fairly large, it mostly refers to a single country. The slow but promising trend of democratisation of the world from 1816 is shown in this interactive chart.

Naturally, none of this means dictatorships are necessarily destined to disappear forever or that we won’t end up with a dictator ruling for 150 years straight because he was rejuvenated. It might happen, but if we extrapolate the increasing democratization trend, the data suggest chances are slim, especially if we take into account that it’ll take at least a few decades before comprehensive rejuvenation therapies that can indefinitely prolong life are available to anyone at all.

The moral of the story is always the same. Can a disruptive technology have negative consequences? Yes, it can. However, we must keep a cool head and analyze available data to establish the likelihood of any side effects, weigh their magnitude against that of the expected benefits, and conversely, assess and compare the pros and cons of not developing the technology. Equally importantly, we must keep in mind that since no one is a clairvoyant, we’ll figure it out as we go, like we’ve always done.

If you enjoyed reading this, LifeXtenshow team have also created a video covering this topic which you might like to watch.