Ending Age-Related Diseases 2022 will occur in less than two weeks, but that’s far from the only thing happening this month, and there’s plenty that happened last month as well. Here’s the latest rejuvenation news from July.

Get Your Discount for Four Days of Rejuvenation Science!: It won’t be long until we host Ending Age-Related Diseases 2022 on August 11th-14th. Like in previous years, this four-day event will be packed with the latest research updates, discussion panels, and on-demand content to enjoy. We are offering you a 10% discount on ticket prices using the code summer2022.

Join NOVOS for part 2 of 6 of the NOVOS Webinar Series: Longevity Lifestyle.

NOVOS will host a live 1-hour webinar with its founders on Wednesday, August 10th. CEO Chris Mirabile, serial entrepreneur and biohacking expert, and CSO Dr. Kris Verburgh, longevity biotechnology specialist and pioneer of nutrigerontology, will discuss the ultimate longevity lifestyle including exercise, sleep, psychology, and more! They will also have a Q&A. This event is free to attend! RSVP and submit questions today. 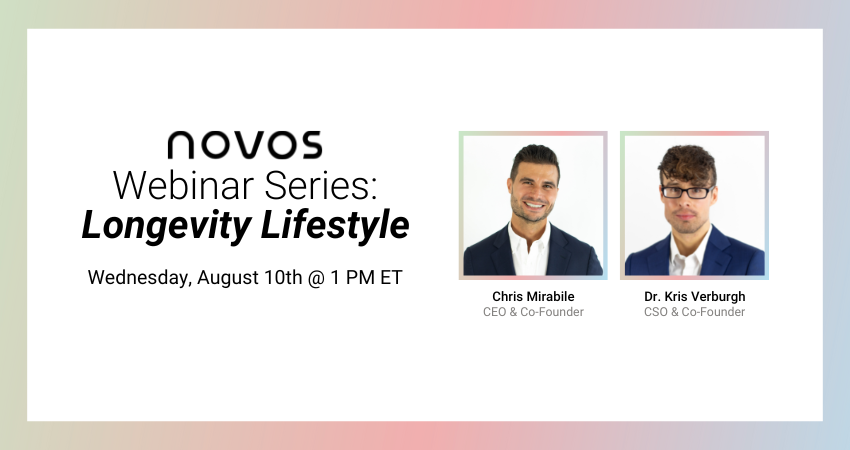 Last month, NOVOS launched the first part of this webinar series – a discussion about supplements and how to take them properly with Dr. Kris. The discussion revolved around common misconceptions with supplements, a three step approach to taking supplements, important longevity ingredients, and more. Watch a recording of the webinar here.

Health Benefits of Cocoa: Ryan O’Shea explains how more evidence has emerged for the heart health benefits of cocoa; it appears that cocoa may lower the risk of death by cardiovascular disease in aging adults.

Age of Elected Officials: Ryan O’Shea jumps into the political arena by focusing on how rejuvenation biotechnology might make Elon Musk’s age-related comments not age well themselves.

Exercise, Metformin, and VO2max: This episode presents a recent study showing that metformin blunts the impact of exercise on performance. Metformin is a commonly prescribed diabetes drug, but it is also popular among biohackers and life extensionists who take it for what they believe to be its longevity benefits.

Extracellular Matrix in Aging with Professor Collin Ewald: Dr. Collin Ewald is a molecular biologist and a professor at the Swiss Federal Institute of Technology in Zürich (ETH). At ETH, Collin leads the Laboratory of Extracellular Matrix (ECM) Regeneration. Here, his research focuses on age-related ECM remodeling and related longevity interventions.

Vadim Gladyshev on the Fundamentals of Aging: Vadim Gladyshev is a Professor of Medicine at Brigham and Women’s Hospital and Harvard Medical School, and he is one of the most prominent figures in geroscience today. We discussed various competing hypotheses on the nature of aging, the lack of the unified theory of aging and the need for one, and several fascinating papers.

Rejuvenating old human skin through VEGF-A: This month, Dr. Oliver Medvedik took a look at a recent paper in which researchers showed that old human skin was rejuvenated when implanted in young mice.

Longevity Will Become a Mainstream Part of Drug Development: Joppe Nieuwenhuis, Innovation Scout at Rejuveron Life Sciences, discusses his views about the future of longevity and rejuvenation research and how it will merge with current medical frameworks and systems.

Rejuvenating the Brain with Transplanted Astrocytes: A new study published in Stem Cell Research and Therapy has shown that rejuvenating the astrocyte niche in the aged brains of mice leads to improved nervous system function at both the cellular and organismal levels.

Fruits and Vegetables Linked to Fewer Cognitive Disorders: A meta-analysis published in Frontiers in Nutrition has found that intake of fruits and vegetables is negatively correlated with cognitive decline in older adults. Sixteen different studies were used for this meta-analysis, and not all of them measured fruit and vegetable comsuption the same way or measured the same endpoints.

Short-Term Resveratrol Reverses Ovarian Aging in Mice: Researchers have shown that resveratrol reverses several features of ovarian aging in mice while activating most sirtuins and boosting mitochondrial health. In many mammals, including humans, ovarian aging is premature compared to other systems.

Mild COVID Can Cause Protracted Neurological Problems: Researchers have shown that even mild SARS-CoV-2 infection can cause lingering neurological symptoms. These findings might shed light on the infamous “long COVID”. COVID survivors sometimes experience cognitive symptoms, such as “brain fog”, that can linger for months.

The Importance of Mitochondria in Joint Health: Publishing in Aging, a team of Spanish researchers has found that changing the mitochondria of standard Black 6 mice, without any other modifications, leads to marked improvements in joint health.

Exercise and Healthy Diet Cannot Replace Each Other: In a large-scale study, scientists have shown that exercise and good diet affect mortality independently, showing that you need both to stay healthy. Exercise is good for you, and so is a healthy diet. Moreover, those are probably the only currently available interventions with a proven effect on healthspan and lifespan.

Fighting Muscle Atrophy with Gene Editing: In a new study published in Journal of Nanobiotechnology, researchers prevented muscle atrophy both in vitro and in vivo by delivering a CRISPR-Cas9 gene editing system packaged in engineered extracellular vesicles.

Vitamin D Supplements May Make Alzheimer’s Worse: In a study with data from about 16,000 people, researchers publishing in Aging Cell have found that administering Vitamin D to Alzheimer’s patients may actually make the problem worse.

Oocytes Age Slowly by Remodeling Electron Transport: Scientists have discovered that immature oocytes maintain their youth by shutting down one of the protein complexes that produce energy in mitochondria.

NAD+ Helps Natural Killer Cells to Fight Cancer: Scientists have shown that the effectiveness of natural killer cells, a crucial component of the immune system, is directly linked to NAD+ levels. Discovering and fighting cancer cells is energetically expensive.

Politicians Live Longer Than Most People: By analyzing historical data, scientists have shown that politicians, an example of an elite group, have enjoyed longer than average life expectancy since about 1950.

Social Frailty Is Correlated with All-Cause Mortality: Scientists have shown that social frailty – a composite index based on income level, household status, and social activity – significantly affects all-cause mortality in the elderly, with poverty being the predominant factor.

Glutamine Supplementation Has Anti-Aging Potential: A new study published in Frontiers of Pharmacology has shown that glutamine deprivation might speed up aging while glutamine supplementation reduces oxidative stress-induced senescence in mice.

Loss of IGF-1 May Contribute to Neurovascular Aging: Researchers publishing in GeroScience have reported that the age-related decline in IGF-1 levels is associated with neurovascular aging. However, given the weak correlations, even if there is a causal relationship, it is likely to be only one of many factors.

Epigenetic Age Acceleration Is Correlated with Mortality: In an important step for the longevity field, scientists have found that epigenetic age acceleration, as measured by four popular methylation clocks, is correlated with aging and mortality in humans.

Targeted Plasmalogen Supplementation in Cognitively Impaired Persons: Changes in cognition and mobility were statistically significant versus a random outcome. Baseline DHA-containing plasmalogen levels were not predictive of clinical response. DHA-plasmalogens were well tolerated at all dosages, and no adverse reactions were observed.

Mitochondrial Transfusion Improves Mitochondrial Function in the Hippocampus of Aged Mice: Methods of mitochondrial transfusion should be further tested to treat a variety of human diseases or disorders and to slow down or reverse processes of aging.

Anti-Aging Effect of the Stromal Vascular Fraction/Adipose-Derived Stem Cells in a Mouse Model of UVB-Induced Skin Aging: Changes in the epidermal cell layer were clearly observed after 7 days of treatment. After 28 days of treatment, the dermal tissue was thickened, and the collagen content and proportion were improved.

Pharmacological senolysis reduces doxorubicin-induced cardiotoxicity and improves cardiac function in mice: The researchers hold that a senolytic approach might help to overcome the clinical limitations of current chemotherapy treatments.

Elimination of Senescent Cells by Senolytics Facilitates Bony Endplate Microvessel Formation and Mitigates Disc Degeneration in Aged Mice: These findings may provide evidence that senolytics can eliminate the senescent cells and facilitate microvascular formation in the marrow space of the bony endplate.

The importance of elders: Extending Hamilton’s force of selection to include intergenerational transfers: These results formalize the theory that longevity can be favored under socioecological conditions characterized by parental and alloparental care funded through transfers of mid- to late-life production surpluses.

VitaDAO Invests $1 Million into Biotech Company Turn.Bio: Marking one of VitaDAO’s largest investments to date, the decentralized organization has allocated $1,000,000 in funding to Turn.Bio. This company, also known as Turn Biotechnologies, plans to undertake preclinical efficacy testing of mRNA therapeutics intended to induce self-healing of the skin and eyes.