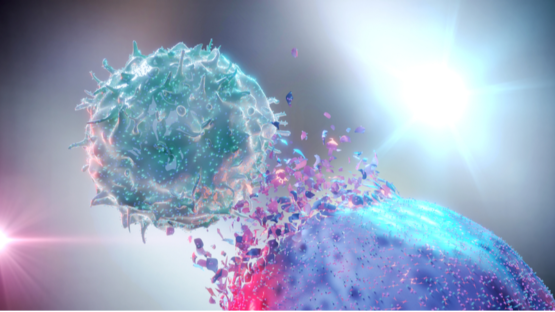 Scientists have shown that the effectiveness of natural killer cells, a crucial component of the immune system, is directly linked to NAD+ levels [1].

Natural killer cells (NK) are an important part of the innate immune system. They got this designation, in arguably the best act of naming in the history of cellular biology, due to their ability to attack damaged or infected cells without requiring activation by antigen-presenting cells. This makes them one of the “first responders”, mostly to viral infections and nascent tumors.

Constantly on patrol, they “shake hands” with cells using various receptors, and if these handshakes are not to their liking, they unleash an arsenal of deadly molecules, such as membrane-piercing perforins and apoptosis-inducing granzymes. NK cells also release cytokines and chemokines that signal to other immune cells to join the fight.

Aging negatively affects many of our immune defenses, including the ability of NK cells to kill bad cells and summon reinforcements [2]. This immunosenescence has been linked to age-related decline in vaccine and anti-tumor response. However, its mechanisms are still not well understood.

NAD+ gives the energy to fight

Cellular warfare requires a lot of energy. Activated NK cells are known to increase their mitochondrial energy production, which is heavily reliant on the coenzyme NAD+. NAD+, a ubiquitous molecule that also facilitates several other important processes, sharply declines with age, probably contributing to many age-related deficiencies [3].

In this new study, the researchers hypothesized that NK’s killing potential is linked to NAD+. First, they established that NK activation by the pro-inflammatory cytokines IL-12 and IL-15 led to an increase in NAD+ and in the expression of enzymes related to NAD+ production. Supplementation of NAD+ in NK cells resulted in the enhanced production of several NK cellular weapons, such as perforins. The cytotoxicity of the treated NK cells increased accordingly, as did their proliferation potential and viability.

NAD+ is produced in cells via three different pathways, and the researchers were able to determine that the increase in NAD+ production in activated NK cells happens mostly due to the salvage pathway. When NAD+ is being used by the cell, it is turned into niacinamide (NAM). The salvage pathway uses the NAD+ precursors nicotinamide riboside (NR) and nicotinamide mononucleotide (NMN) to recycle NAM back to NAD+. The whole process is facilitated by the enzyme NAMPT. The researchers found that NMN supplementation produced the same positive effects as NAD+ supplementation, while inhibiting NAMPT created the opposite effect.

If NK cells are supposed to kill cancer cells, why do humans still develop cancer? On top of age-related immunosenescence, the tumor microenvironment is known to impair the cytotoxic and cytokine-producing abilities of immune cells, NK cells included [4]. The researchers assumed that NAD+ might play a role here as well. They isolated NK cells from murine tumors and studied their transcriptomes in order to find significant downregulation of genes related to NAD+ metabolism. In another experiment, media from cancer cells reduced NAD+ levels and NAMPT expression when applied to NK cells.

The researchers also analyzed NAMPT expression in NK cells using 50 human samples of hepatocellular carcinoma (HCC), and they found that it positively correlates with patient survival. In a mouse model of HCC, NAMPT knockout significantly accelerated tumor growth and decreased survival, while supplementation with NMN enhanced the anti-tumor activity of NK cells. In a mouse model of melanoma, the researchers implanted cancer cells together with either NMN-treated or control NK cells and found that the treated cells were much better in suppressing tumor growth.

The researchers were also able to come up with a possible culprit for the decline in fitness that NK cells suffer in a tumor environment. Lactate, the conjugate base of lactic acid and a byproduct of tumor metabolism, is abundant in tumors. Experiments showed that treating NK cells with lactate leads to NAMPT downregulation in a dose-dependent manner, while blocking lactate uptake exerts the opposite effect. This important study joins the growing body of evidence demonstrating that age-related NAD+ deficiency is responsible for various manifestations of aging, including the decline in the immune system’s ability to fight cancer. If this is indeed the case, boosting NAD+ levels, which looks like a solvable problem, can be a potent anti-aging intervention, although we should probably wait for more data before buying a pack of NMN pills online.