Live birthrates were returned nearly to those of younger animals. Researchers have shown that resveratrol reverses several features of ovarian aging in mice while activating most sirtuins and boosting mitochondrial health [1].

In many mammals, including humans, ovarian aging is premature compared to other systems. The reasons for this accelerated loss of function are not entirely clear, but they are known to include chromosomal abnormalities, accumulation of DNA damage, decrease in mitochondrial activity, and problems with ATP production. Reproductive aging is a pressing problem for women in today’s society (read our interview with Dina Radenkovic, the founder of Gameto, a startup dedicated to reproductive longevity).

Resveratrol, a molecule well-known in the longevity field, is a polyphenol contained in red wine, grapes, and peanuts. Like many other polyphenols, it has antioxidant and anti-inflammatory properties. Resveratrol has been shown to activate the production of the beneficial proteins of the sirtuin family and to improve mitochondrial function [2].

Previous research has already demonstrated the positive effect of resveratrol supplementation on ovarian function in mice [3]. However, the treatment duration (6 or 12 months) was very long in murine terms, which makes it potentially less translatable. Moreover, the 6-month treatment was found to be mostly ineffective, probably because it had ended when the mice were still too young to experience a marked decline in ovarian function.

In this new study, the researchers searched for a shorter protocol that would still be effective. The mice were treated with resveratrol for either 1, 12, or 22 weeks until the age of 47 weeks (around 40 human years). Just like humans, by this time, mice usually have impaired ovarian function.

First, the researchers confirmed that the treatment had not changed the animals’ body weight, since such a change by itself could have affected ovarian function and contaminated the results. The mice’s estrous cycle remained normal as well.

In all study and control groups, IVF was conducted upon the completion of treatment, and a battery of tests was run. Old untreated controls had many fewer ovulated oocytes compared to young mice, but in all treatment groups, the decline was attenuated, even if not fully reversed. Interestingly, the most drastic reversal happened in the 12-week group, while the one-week treatment showed only modest improvement. Fertilization rate improved only in the 22-week group, but this probably is not a major problem, since even in old untreated mice, it didn’t fall below 60%.

Implantation rate, a basic measure of IVF success, was higher than 80% in young mice, but it fell below 20% in old untreated controls. However, it was reversed almost to youthful levels in all study groups, including, importantly, the one-week group.

The live offspring rate measured about 60% in young mice, dropped below 10% in aged untreated animals, and was significantly restored in all three study groups. Here, the results were somewhat counterintuitive as well, with the 12-week treatment being the least effective of all three. The 22-week treatment was the most effective and boosted the live offspring rate basically to youthful levels. 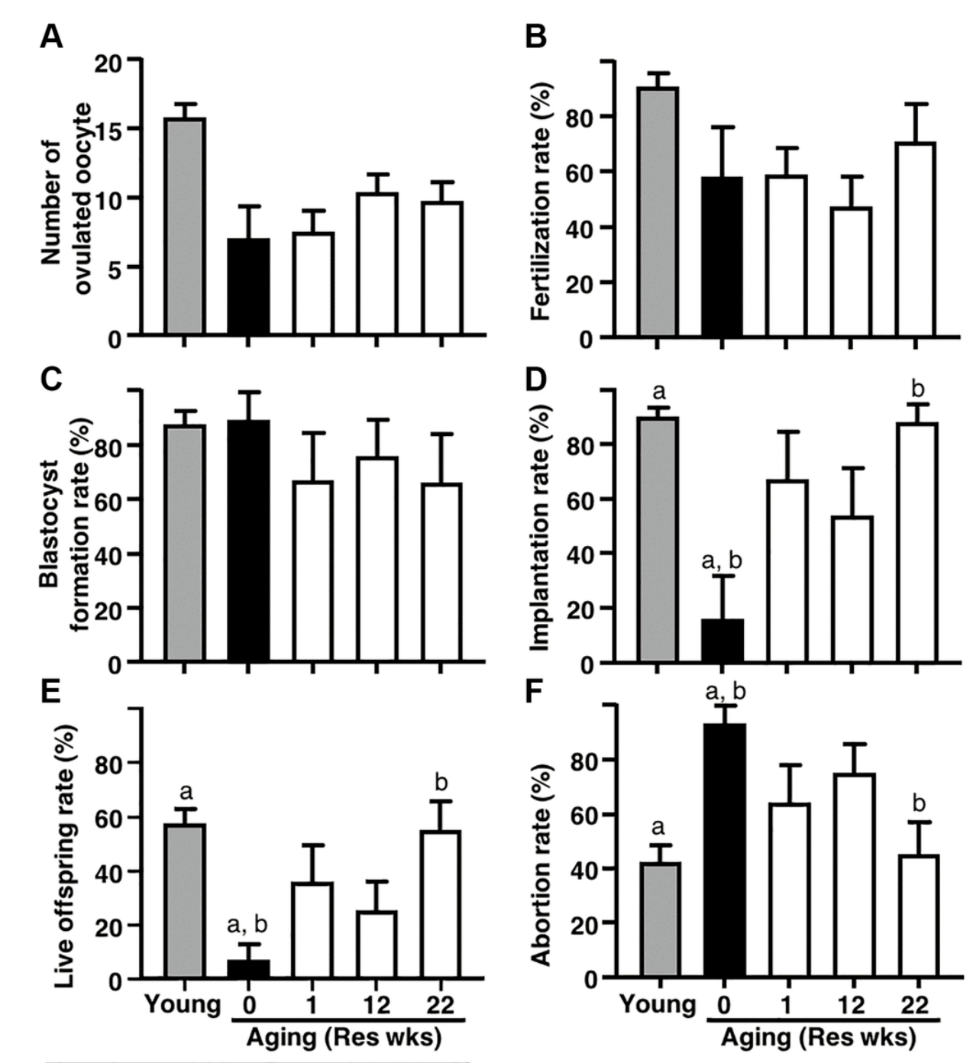 Confirming the treatment’s safety, no abnormalities were detected in offspring or placentas derived from the mice after the 22-week treatment. The pups then underwent normal development and, after reaching adulthood and mating, delivered healthy offspring.

An even stronger correlation was detected between resveratrol serum levels and the expression of sirtuins, except SIRT2 and SIRT6. Since resveratrol and some sirtuins are known to improve mitochondrial function, the researchers assessed mitochondrial membrane potential, an indicator of mitochondrial health that drastically declines with age. Amazingly, resveratrol-treated mice had the same mitochondrial potential as young controls. Resveratrol also significantly boosted ATP production, although not back to youthful levels.

This study shows that even a relatively short-term treatment with resveratrol started later in life can significantly reverse ovarian aging in mice. The study’s design makes it more relevant to humans than some previous research, and the results confirm again that resveratrol does serve as a sirtuin activator and is beneficial to mitochondrial function, even if it does not affect mitochondrial biogenesis.