This approach is successful in mouse models. 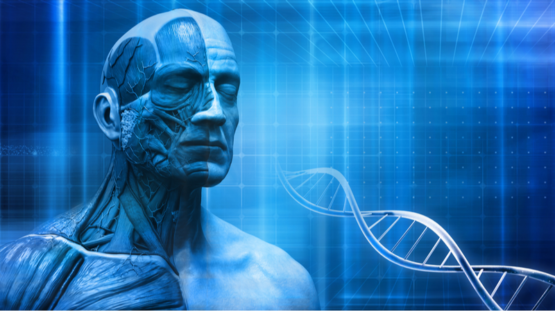 In a new study published in Journal of Nanobiotechnology, researchers prevented muscle atrophy both in vitro and in vivo by delivering a CRISPR-Cas9 gene editing system packaged in engineered extracellular vesicles [1].

When just using it doesn’t quite cut it

Aging is accompanied by the loss of muscle mass, also known as sarcopenia, which deteriorates up to 50% of muscle tissue by the age of 80 [2]. Age-related muscle atrophy is associated with a number of pathological conditions, including osteoporosis, and ultimately leads to frailty.

Bones adapt to muscle load: in other words, the bigger the muscles, the stronger the bones. Integrating strength training into a workout routine is currently the only effective way to offset sarcopenia. Therefore, other therapeutic approaches are being explored, including gene therapy that targets microRNAs.

MicroRNAs are non-coding RNAs regulating the expression of their target messenger RNAs. One such microRNA gaining attention in aging research is miR-29b, a regulator of extracellular matrix proteins that is also involved in the differentiation of osteoblasts, bone-building cells. This microRNA was shown to be upregulated in a variety of aging-associated processes [3]. Therefore, reducing miR-29b is being investigated as an anti-aging therapeutic target.

miR-29b inhibitors are already commercially available, although their use is limited due to their unpredictable side effects and toxicity. Previously, a CRISPR/Cas9 gene editing system targeting miR-29b packaged into lentivirus and adeno-associated viruses (AAV) was shown to suppress this microRNA and protect against muscle atrophy in a mouse model [4].

In this study, the researchers packaged miR-29b-targeting CRISPR-Cas9 into extracellular vesicles instead of viral particles. Extracellular vesicles are lipid-bilayered particles naturally secreted by cells to deliver various molecules to recipient cells. They are considered a superior option compared to viral delivery in terms of immune response and packaging capacity.

First, the researchers constructed the delivery system by packaging the Cas9 protein, which is the molecular ‘scissors’, along with a small guide RNA that recognizes miR-29b and guides Cas9 to target it, into engineered extracellular vesicles (EVs). In addition to their gene editing cargo, the EVs contained a glycoprotein derived from a virus to make them more efficient at entering the target tissue’s cells.

These EVs were produced by introducing several plasmids encoding the sequences required for the production of EVs into a cell culture, followed by several centrifugation steps to get rid of other cell components and isolate the EVs. Various techniques were then used to confirm that the EVs contained the expected cargo and demonstrated the characteristic morphology.

The researchers then checked if the engineered EVs could achieve their goal of reducing the expression of miR-29b. They treated muscle cells in culture with the EVs and confirmed that the EVs disrupt the expression of miR-29b through gene editing. Importantly, the silencing effect was achieved in a short period of time (24 hours) and in almost all of the cells.

The delivery system in action

Finally, the engineered EVs were injected intramuscularly into eight-week-old male mice with muscle atrophy. The researchers used two mouse models of muscle atrophy: immobilization-induced and denervation-induced. For the former, the hind limbs of mice were fixed with screws to achieve immobilization. For the latter, the mice had their sciatic nerves cut. This prevented these mice from sending nerve signals to their legs, leading to muscle atrophy.

The EV injections were then performed into the gastrocnemius leg muscle seven times, spread over a five-week period following either the immobilization or the sciatic nerve surgery.

Muscle atrophy is a frequently observed complication, characterized by the loss of muscle mass and strength, which diminishes the quality of life and survival. No effective therapy except exercise is currently available. In our previous study, repressing miR-29b has been shown to reduce muscle atrophy. In our current study, we have constructed artificially engineered extracellular vesicles for the delivery of CRISPR/Cas9 to target miR-29b (EVs-Cas9-29b). EVs-Cas9-29b has shown a favorable functional effect with respect to miR-29b repression in a specific and rapid manner by gene editing. In in vitro conditions, EVs-Cas9-29b could protect against muscle atrophy induced by dexamethasone (Dex), angiotensin II (AngII), and tumor necrosis factor-alpha (TNF-α). And EVs-Cas9-29b introduced in vivo preserved muscle function in the well-established immobilization and denervation-induced muscle atrophy mice model. Our work demonstrates an engineered extracellular vesicles delivery of the miR-29b editing system, which could be potentially used for muscle atrophy therapy.

This study shows that targeting miR-29b using an EV-packaged gene editing system is an effective and safe approach to treat muscle atrophy in mouse models. Importantly, the EVs were derived from muscle cells, so they did not trigger an immune response when injected into skeletal muscles. The authors acknowledge that some molecules from the cells used to produce the EVs could have been packaged into the EVs; therefore, the assumption of safety might be false, which requires further investigation.

Currently, one of the biggest challenges of gene therapy is tissue-specific delivery. By engineering EVs to contain surface proteins that recognize specific cells, it may be possible to achieve targeted delivery. Hopefully, future studies will explore this venue of translational research.