From mice to people, one step at a time. While new variants of the ongoing COVID-19 pandemic make the headlines, heart disease and cancer remain the top causes of death, and the mortality rates of all three maladies rise sharply with advanced age. Let’s see what steps we’ve taken against aging in November. 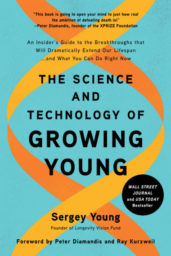 The Science and Technology of Growing Young: From Sergey Young, founder of the Longevity Vision Fund, this innovative book asks readers to view aging as a treatable condition rather than an unavoidable part of life, detailing present treatments and future possibilities for living longer and better. Use discount code “Longevity” until 12/19.

A New Rapamycin Human Trial for Longevity: We are delighted to announce that we are working with Dr. Brad Stanfield to launch human trials of rapamycin to see if it can slow down aging in a meaningful way. The trial will include low-dose rapamycin combined with exercise to see if there is synergy between the two.

Nathan Cheng on Longevity Startups: Nathan Cheng of On Deck outlined the history of the longevity industry, from early efforts started decades ago to where we are today, and offered ways of moving forward.

What It’s Like Being Dead: On this philosophical episode, Ryan O’Shea discusses the continuity of consciousness and asks what death is really like.

Can Humans Be Eternals?: For this episode of Lifespan News, Ryan O’Shea takes a look at the latest addition to the Marvel Cinematic Universe and asks if real people can actually become eternal beings.

Spinal Cord Regeneration: This episode is about how an injection allows paralyzed mice to walk again after spinal cord injury, a long-held dream of regenerative medicine.

Targeting Amyloid Beta for Alzheimer’s Disease: A new study appears to have solved the mystery of how amyloid beta, a key player in Alzheimer’s, forms in brain nerve cells. The data suggests that the sigma-1 receptor may be a therapeutic target for reducing amyloid beta production, specifically in axons.

Fusion Power: This episode brings up a long-discussed topic: bringing the power of the Sun to Earth. If it can be made to work, doing so would offer incredibly cheap, non-polluting, and basically limitless energy for the entire world.

Solar Flares: The previous episode of STSTW discussed bringing the Sun to Earth, but this time, we discuss the results when that happens in the wrong way.

Lorna Harries: “We’re Looking to Reverse Senescence”: Lorna Harries is a Professor of Molecular Genetics at the University of Exeter Medical School. She is also the CSO and R&D lead at SENISCA Ltd. Like many other companies, and as evidenced by the name, SENISCA targets senescent cells, albeit using an unusual mRNA-based approach.

Martin Borch Jensen: Cutting the Gordian Knot of Aging: We spoke with Martin about the bold ideas behind Impetus Grants and Gordian, his view of the longevity field, and why lifespan versus healthspan is a false dichotomy.

A Summary of Hydrolyzed Collagen and Aging: Collagens are important structural proteins for the various tissues in our bodies. These include tendon, cartilage, ligaments, blood vessels, muscles, and skin. They act as supporting structures and tether cells together, and they give our skin and other tissues strength and elasticity.

What is Metformin? A Summary of N,N-dimethylbiguanide: Metformin is a prescription drug and is available as a tablet or an oral solution. It is a commonly used first-line medication for the treatment of type 2 diabetes. We take a look at this diabetic drug that some researchers think may slow down aging. Is Immortality Possible or Is Aging Inevitable?: “Could humans become immortal?” is something we get asked quite often, and the answer depends on what you mean exactly. Whether human immortality is possible greatly depends on how you define it.

“Ageless” by Andrew Steele: A Perfect Pop-Sci Book on Aging?: People have looked for ways to extend their lives since… well, forever. The niche of popular science books on aging is hardly saturated, and Andrew Steele’s “Ageless” is definitely one of the best attempts to date.

Removing Senescent Cancer Cells With Peptides: A study published in EBioMedicine has shown how a peptide targets and kills senescent cancer cells, potentially paving the way for a new class of interventions.

How Uncontrolled Diabetes Is Linked to Cognitive Impairment: A team of Spanish researchers has examined how glucose imbalance leads to neurological disorders through the failure of adipocytokines, which are vital to brain function..

A Drug Duo Shows Promise Against Bladder Cancer: In an important proof-of-concept study, scientists have successfully employed a ferroptosis activator and an mTOR inhibitor against bladder cancer cells. Ferroptosis is a distinct type of cell death that gets less attention and is less well understood than the more ubiquitous and familiar apoptosis.

How Telomerase Reverse Transcriptase Protects the Heart: Research published in Circulation has shown that mitochondrial, but not nuclear, telomerase reverse transcriptase (TERT) protects against damage caused by heart attacks in a murine model through a non-canonical method.

Blueberry Extract Alleviates Alzheimer’s in Mice: A group of researchers has confirmed the neuroprotective effect of blueberry extract and identified a possible mechanism of action that might facilitate drug development.

New NF-κB Targeting Drug Improves Healthspan in Mice: New mouse data published in the latest issue of Aging Cell highlights the aging benefits of a novel NF-κB-based drug. NF-κB is a transcription factor found in nearly all animal cell types and is activated in response to multiple physiological insults.

DNA Damage, Inflammation, and the Stem Cell Microenvironment: A review published in Frontiers in Cell and Developmental Biology has explained how DNA damage and its accompanying immune response lead to changes in the microenvironment of stem cells, causing a decline in their function.

Plasma Exchange Alleviates Alzheimer’s in a Human Trial: New results from the AMBAR trial show that plasma exchange leads to statistically significant functional and cognitive improvements in patients with mild to moderate Alzheimer’s.

Senolytic Therapy Shows Potential for Stroke Recovery: A study published in the International Journal of Molecular Sciences investigates the role that senescent cells may play in cerebral ischemia-reperfusion injury and how senolytic therapy may be beneficial for people recovering from stroke.

Data Released from the NIA Long Life Family Study: Since 2005, a team of researchers in Denmark and the United States have been conducting the National Institute on Aging’s Long Life Family Study (LLFS). Enrolled in the study were 4953 individuals from two generations of family, including siblings, spouses, and offspring.

Understanding How Young Blood Helps Old Mice: A preprint published on bioRxiv, whose authors include well-known biogerontologist Vadim Gladyshev, has shown us many interesting details of the effects that heterochronic parabiosis has on aging mice.

A Review of Meditation Practices for Cognitive Aging: A team of researchers, including Dr. Olga M Limecki of TU Dresden University, has published a review on the effect of mindfulness meditation and loving-kindness compassion meditation (LKCM) and proposed a model to study it.

p21 Expression Is a Delayed Death Sentence for Cells: Researchers publishing in Science have found that the well-known biomarker p21 starts a fatal timer for mouse liver cells. The cyclin-dependent kinase inhibitor p21, which is encoded by the Cdkn1a gene, is associated with its own secretome: the p21-associated secretory phenotype (PASP).

Rapamycin Prevents Stem Cells from Growing Too Big: Researchers have found that hematopoietic stem cells lose function as they grow larger and that rapamycin can alleviate this effect.

Mitochondrial Calcium Uptake and Sarcopenia: A team of researchers publishing in Cell Death & Disease has found that the age-related decline of mitochondrial calcium uptake family member 3 (MICU3), a regulator of mitochondrial function, is associated with sarcopenia, the aging-associated loss of muscle.

Metformin Alleviates Cognitive Impairment in Long-Term Study: Scientists have confirmed yet another positive effect of metformin: its prolonged use by people with diabetes lowers the risk of cognitive impairment and cerebral small vessel disease.

Rejuvant conferred an average 8 year reduction in biological aging: Focusing primarily on alpha-ketoglutarate, this formulation showed effectiveness according to the TruAge methylation clock.

Skin hydration and reduction of skin wrinkles through an anti-aging cream with alpha-ketoglutarate: This research concludes that AKG generated through rice fermentation could be a promising cosmetic ingredient for skin care products.

Assessments in Alzheimer’s disease patients treated with albumin plasma exchange: In this Phase 2b/3 study, notable improvements were seen in language processing and memory.

Oral L-Arginine (5 g/day) for 14 Days Improves Microcirculatory Function in Women: Both healthy young women and elderly diabetics were shown to be helped by this compound.

Effect of Resveratrol on Serum Levels of Type II Collagen and Aggrecan in Patients with Knee Osteoarthritis: A Pilot Clinical Study: While it was not placebo controlled, this study showed improvements in aggrecan and in outcomes.

Skeletal muscle adaptations to exercise are not influenced by metformin treatment in humans: It has been feared that metformin has a negative effect on physical training, but this study shows that this is not the case.

Targeting p21Cip1 highly expressing cells in adipose tissue alleviates insulin resistance in obesity: The researchers of this study lay the foundation for pursuing the targeting of p21high cells as a new therapy to alleviate insulin resistance.

Vaccine targeting ANGPTL3 ameliorates dyslipidemia and associated diseases in mouse models: This gene is responsible for the excessive production of triglycerides, and this research focuses on how downregulating it can potentially prevent atherosclerosis.

Development of allogeneic HSC-engineered iNKT cells for off-the-shelf cancer immunotherapy: By generating hematopoietic stem cells that produce invariant natural killer T cells, the researchers intend to create an immunotherapy for cancer without the risk of graft versus host disease.

Gonadal rejuvenation of mice by GDF11: These results suggest that GDF11 can protect the ovarian and testicular functions of aged mice via slowing down the generation of reactive oxygen species through enhancing the activities of antioxidant enzymes.

Longevica to Launch an Open Research Platform: Longevica, a company focused on the biology of aging, has raised $2.5 million dollars for its platform that it hopes will accelerate life extension research. We have included the full press release.

Super Longevity Holiday Party: On December 18 from 3:00 to 6:00 PM Pacific time, Humanity+ encourages participants to create their own Nodes in order to meet with like-minded people while participating in this worldwide event, which will include an hour-long Zoom session. Attendance is free, and participants, whether alone or in groups, are encouraged to bring their own toasts to the Zoom event.