Senescent Cells in the Aging Retina

Senescent cells and their secretions are shown to contribute to age-related macular degeneration. 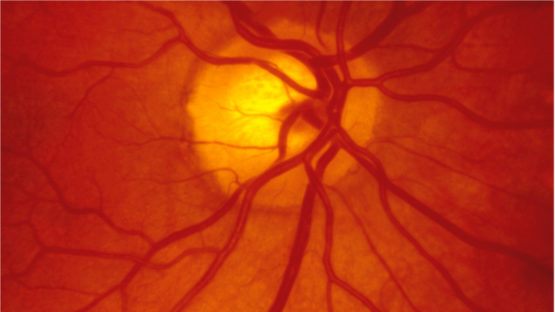 A review published in the Journal of Neuroinflammation explores the potential application of senotherapies, particularly in the context of treating age-related macular degeneration [1].

One of the most advanced approaches to treating aging and age-related diseases is that of addressing the presence of harmful senescent cells, which begin to accumulate with advancing age as the immune system and other clearance methods begin to break down. Worse still, the pace of this accumulation speeds up as we get older, creating a downward spiral.

Suggested solutions to this problem include destroying the cells using senolytics, modifying the SASP to be less harmful using senomorphics, slowing down the rate of senescent cell accumulation via cell cycle regulation, using cell therapies or drugs to rejuvenate the immune system so that it quickly removes senescent cells, and, more recently, rescuing senescent cells from their harmful state and returning them to homeostasis. Collectively, these different approaches are known as senotherapies.

The senolytic strategy is currently the most popular, as destroying and removing the problematic cells is the most practical and direct approach. Certainly, in animal studies involving aged mice, senolytic treatment to clear senescent cells appears to spur rejuvenation, as it reduces inflammaging, the chronic systemic inflammation that accompanies aging, and reverses a number of aging biomarkers.

The presence and importance of senescent cells in the eyes during aging, particularly in the development of AMD, is becoming increasingly clear. As we established earlier, cell senescence is an key driver of age-related diseases, including AMD, and the authors of this review do a good job of diving into the mechanisms behind cellular senescence and what causes a cell to enter this harmful state, including telomere attrition, DNA damage, excessive exposure to reactive oxygen species, and loss of metabolic homeostasis.

One of the more interesting parts of the review includes a Venn diagram of three kinds of senescent cells in the eye and the various elements of the SASP that each type secretes.  Three components, interleukin 12, interleukin 6, and tumor necrosis factor alpha, are produced by all three of the types. 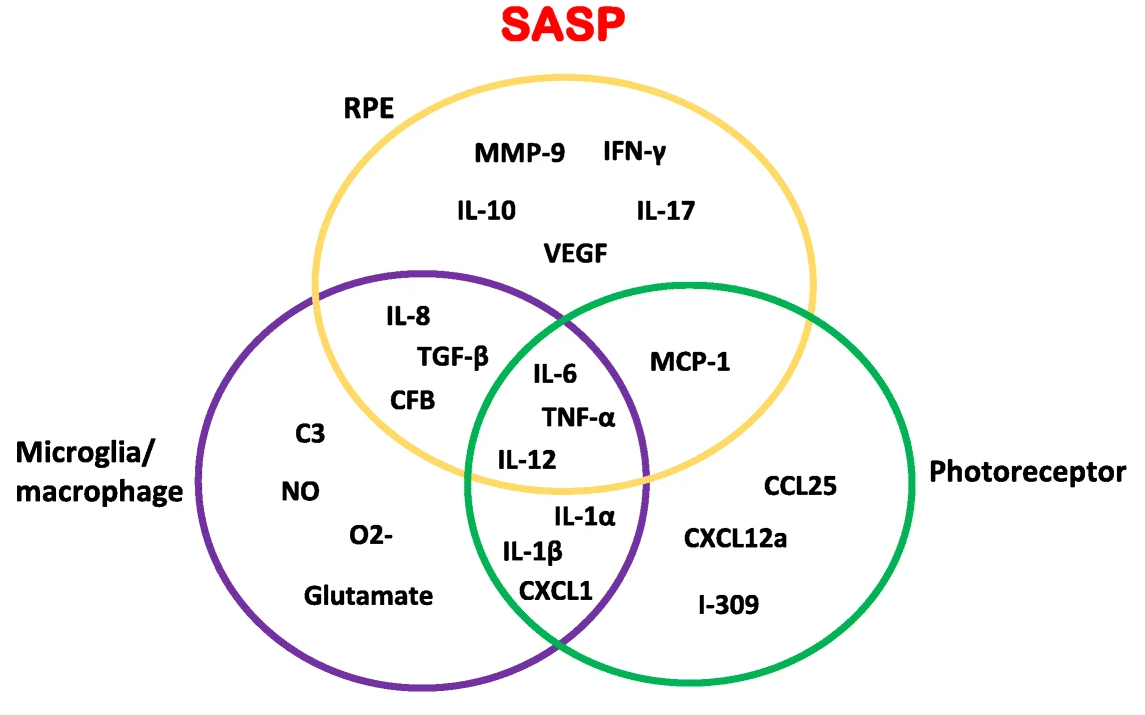 The authors go on to explore how the different senescent cell types in the eye contribute to the progression of AMD and the complex interplay between them. There is also particular emphasis on the role of senescent immune cells. The review goes on to discuss the various adaptive metabolic pathways through which cellular senescence supports the progression of AMD and the signaling cascades that it triggers.

The final part of the review considers the potential of senotherapies in the context of addressing AMD.

Age-related macular degeneration (AMD), a degenerative disease in the central macula area of the neuroretina and the supporting retinal pigment epithelium, is the most common cause of vision loss in the elderly. Although advances have been made, treatment to prevent the progressive degeneration is lacking. Besides the association of innate immune pathway genes with AMD susceptibility, environmental stress- and cellular senescence-induced alterations in pathways such as metabolic functions and inflammatory responses are also implicated in the pathophysiology of AMD. Cellular senescence is an adaptive cell process in response to noxious stimuli in both mitotic and postmitotic cells, activated by tumor suppressor proteins and prosecuted via an inflammatory secretome. In addition to physiological roles in embryogenesis and tissue regeneration, cellular senescence is augmented with age and contributes to a variety of age-related chronic conditions. Accumulation of senescent cells accompanied by an impairment in the immune-mediated elimination mechanisms results in increased frequency of senescent cells, termed “chronic” senescence. Age-associated senescent cells exhibit abnormal metabolism, increased generation of reactive oxygen species, and a heightened senescence-associated secretory phenotype that nurture a proinflammatory milieu detrimental to neighboring cells. Senescent changes in various retinal and choroidal tissue cells including the retinal pigment epithelium, microglia, neurons, and endothelial cells, contemporaneous with systemic immune aging in both innate and adaptive cells, have emerged as important contributors to the onset and development of AMD. The repertoire of senotherapeutic strategies such as senolytics, senomorphics, cell cycle regulation, and restoring cell homeostasis targeted both at tissue and systemic levels is expanding with the potential to treat a spectrum of age-related diseases, including AMD.

Age-related macular degeneration and a wide range of age-related diseases could potentially be ameroliated by senotherapies. Right now, there are several companies developing senotherapies poised to enter human trials this year; UNITY Biotechnology is already in trials for diabetic macular edema, another age-related visual condition supported by senescent cells, with its senolytic candidate UBX1325.

UBX1325 is also being evaluated for its potential to treat other age-related diseases of the eye, including age-related macular degeneration and proliferative diabetic retinopathy. We anticipate that initial data from this trial could be announced later this year, and we are keeping our fingers crossed that the results will be positive for UNITY this time.