2022 is upon us, with plenty of startups and research to develop. 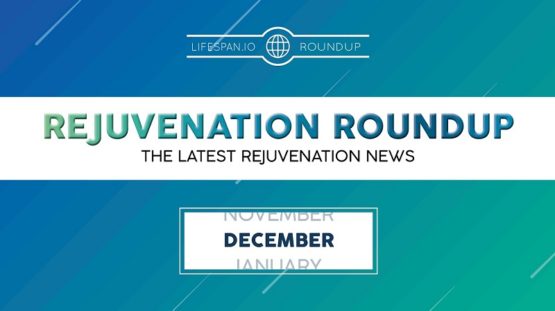 2021 has come to a close, but rejuvenation biotechnology is still just beginning. Let’s see what the field has accomplished in December.

Holiday Wishes from Lifespan.io: Lifespan.io president Keith Comito thanks the community of Lifespan.io for helping to bring an end to the diseases of aging, closes out the year, and looks forward to our further growth as a non-profit organization.

Tim Maupin on Art and Longevity: Elena Milova of Lifespan.io interviewed Tim Maupin, an NYC-based filmmaker, about the way art can help change the way society views longevity research. As Elena pointed out, before we can see large-scale implementation of rejuvenation biotechnology, we have to convince people that greatly extended lifespans are good.

Tina Woods on a Longevity Ecosystem: Elena Milova interviewed Tina Woods on the development of a longevity ecosystem, the importance of language, and the social aspects of extending lifespans.

Gitcoin Grants for Longevity: Brent Nally talks about how Gitcoin Grants Round 12 has kicked off with over $2 million dollars committed in matching funds for projects; some of the projects involved are our own.

Elon Musk on Longevity: Elon Musk has been named Time Magazine’s person of the year for 2021, and he has made a habit of finding success in heavily regulated, capital-intensive – finance, automotive, energy, and space. Ryan O’Shea talks about Elon Musk’s views on longevity and our reactions to these sorts of concerns.

Coinbase CEO vs Aging: Ryan O’Shea talks about how the CEO of Coinbase, a crypto billionaire, is contributing to the fight against aging through the launch of NewLimit, an ambitious new company focused on radically extending human lifespan.

Telomere dysfunction, aging, and susceptibility to COVID-19: We talk about a study showing how age-related telomere dysfunction due to telomeric shortening or damage triggers DDR activation, which, in turn, causes the upregulation of ACE2, the SARS-CoV-2 cell receptor. This research paper outlines one of the reasons why elderly people are more susceptible to the ongoing COVID-19 pandemic.

Music and Chills: This episode focuses on the well-known ‘chills’ reaction when listening to music, exploring why this might occur and what role it might play in biology.

Cryptocurrency: On this episode, we discuss how cryptocurrencies work and how such blockchain-based currencies are different from money printed by governments. Almost all money in the world is already digital; only a small portion exists as physical. What Is Quercetin? A Summary of Quercetin: Found in many fruits and vegetables, quercetin may have some potential in the context of aging. Here, we take a look at this natural antioxidant and popular dietary supplement.

Separating Fact from Fiction in Anti-Aging Diets: Dr. Matt Kaeberlein and colleagues recently published a review summarizing anti-aging diets as well as their misconceptions. While fasting diets have been practiced for centuries, a recent re-emergence of this research has come to the anti-aging field.

Narrowed Neck Arteries Lead to Reduced Blood Flow in Eyes: Researchers publishing in GeroScience have found that carotid artery stenosis, a consequence of hypertension and a dangerous condition that is strongly associated with stroke, is linked to a lack of blood flow in the eyes.

Alpha-Ketoglutarate Decreases Biological Age in Human Study: A commercially available alpha-ketoglutarate-based supplement has been shown to roll back biological age by 7 years on average in a retrospective human study. Though metformin and rapamycin are getting most of the attention in the longevity field today, alpha-ketoglutarate (AKG) has emerged as another candidate longevity drug.

Building a Universal Immunotherapy for Cancer: Researchers publishing in Cell Reports Medicine have described a method of using off-the-shelf, allogeneic immune cells as cancer therapy without the usual immunological risks associated with such cells.

Late-Life Treatment Extends Nematode Lifespan by Two-Fold: Scientists have managed to extend the lifespan of C. elegans nematode worms by as much as 135% by blocking an insulin-related pathway very late in life. Back in the late 80s and early 90s, experiments with C. elegans, tiny nematode worms, became one of geroscience’s first major successes, but this recent study uses a different approach.

Hyperbaric Oxygen Causes Transcriptomic Changes: Transcriptomic results have been published regarding the Shamir Medical Center longitudinal study on hyperbaric oxygen therapy (HBOT), which was conducted between 2016 and 2020 on 35 healthy adults aged 64 and older.

A Licorice Derivative Restores Adipose Stem Cells in Vitro: Researchers publishing in Aging have reported that licochalcone A (LA), a flavonoid that originates from Chinese licorice, restores human adipose-derived stem cells (hADSCs) in cell culture. Previous research on Licochalcone A has discovered that it has anti-inflammatory and anti-tumor effects, reduces obesity in mice, and protects against liver failure.

Viagra Identified as a Candidate Drug for Alzheimer’s: After sifting through 1,600 FDA-approved drugs, scientists have shown that Viagra is significantly correlated with lower Alzheimer’s disease risk. Viagra (sildenafil) is one of the most recognizable drugs in the world, but originally, sildenafil was studied as a heart drug.

A Plant-Based Diet Is Correlated With a Less Leaky Gut: The MaPLE trial in Italy investigated whether or not increasing fruits and vegetables decreases leaky gut syndrome. This study examines increased intestinal permeability in adults 60 years and older, as age has been reported to be a risk factor for increased intestinal permeability over the age of 50.

Old Serum Shown to Kill Brain Stem Cells: A study published in Aging and Disease has shown how exposure to old serum causes hippocampal progenitor cells (HPCs), which form new neurons, to die. To begin their study, the researchers examined a middle-aged to old cohort ranging in age from 52 to 89.

The Effects of Physical Activity on Frailty: Sarcopenia, osteoporosis, and osteoarthritis are the trio of age-related diseases that affect, respectively, muscles, bones, and joints. This study shows that even low levels of physical activity are very good for all three, but exercising too much can potentially harm you.

Senolytics Improve Muscle Regeneration Only in Old Animals: A study published in Aging Cell has found divergent results between the post-injury muscle regeneration of young and old mice treated with senolytics. This study showed that infiltrating macrophages after injury become senescent in older mice and impair the healing process.

A Potential Vaccine for Senescent Cells: The journal Nature has published a letter communication regarding a senolytic vaccination study. The researchers examined transcriptomic data and analyzed the expression profiles for two specific genes using the Gene Expression Omnibus Database.

A Link Between the Circadian Rhythm and Aging: A new study published in Aging has shown a relationship between the circadian clock, which governs our daily biological rhythms, and the changes in gene expression with age.

Evaluation of the Anti-Aging Effects of a Probiotic Combination Isolated From Centenarians in a SAMP8 Mouse Model: The anti-aging effects of the probiotic combination may be through the regulating intestinal microbiota and inhibiting TLR4/NF?B-induced inflammation. This research provides the basis and technical support for the future production and application of the probiotic combination.

Exercise plasma boosts memory and dampens brain inflammation via clusterin: These findings demonstrate the existence of anti-inflammatory exercise factors that are transferrable, target the cerebrovasculature and benefit the brain, and are present in humans who engage in exercise.

Profiling epigenetic age in single cells: The researchers use a new framework, scAge, to reveal a natural and stratified rejuvenation event occurring during early embryogenesis. They provide this framework as a resource to enable exploration of epigenetic aging trajectories at single-cell resolution.

Spermidine supplementation influences mitochondrial number and morphology in the heart of aged mice: Mitochondria of the aged mouse left ventricle exhibited changes in number and 3D ultrastructure that is likely the structural correlate of dysfunctional mitochondrial dynamics. Spermidine treatment reduced, at least in part, these morphological changes, indicating a beneficial effect on cardiac mitochondrial alterations associated with aging.

Oligomer-Targeting Prevention of Neurodegenerative Dementia by Intranasal Rifampicin and Resveratrol Combination: These results show the advantages of this combinatorial medicine with regards to safety and effectiveness over single-drug rifampicin. The findings may provide a feasible means for the prevention of neurodegenerative dementia that targets toxic oligomers.

No limit to maximal lifespan in humans: how to beat a 122-year-old record: Well-known gerontologist Mikhail Blagosklonny shows that combining anti-aging medicine with cutting-edge medical care, regardless of chronological age, will extend maximal lifespan further.

Gitcoin Launches Crypto Funding Round for Longevity: Gitcoin is a platform dedicated to supporting the development of open-source Web3 software – decentralized architecture based upon blockchain technology – and the funding of  “public goods” projects that are intended to benefit everyone. Of course, one such public good is the extension of healthy human lifespan, including our own projects.

NewLimit: A New Biotech Working on Epigenetic Aging: Long gone are the times when longevity biotech companies were scarce and poorly funded. Two investors, including a co-founder of Coinbase, have announced a new biotech venture that aims to solve aging by studying its epigenetic aspects.