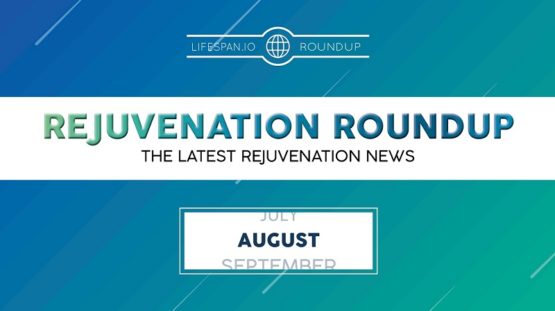 EARD2022 is over, but the research and events continue. Here’s a summary of everything that’s happened in August.

We are hiring! We are currently looking for a full-time chief of staff, a full-time data-driven Senior Marketing Manager, a part-time Youtube sponsorship/partnership acquisition lead, a social media intern, a part-time grant writer, and volunteers to support various programs. If you are interested in learning more about any of these positions, please contact us with your resume and salary expectations.

Announcing the Longevity Prize: The Longevity Prize is a series of prizes designed to honor the researchers who are helping to build a future in which age-related diseases are a thing of the past. This new initiative aims to accelerate progress in the rejuvenation biotechnology field and encourage innovation.

Stephanie Dainow to Present at the 9th ARDD Conference: On August 22, 2022, Lifespan.io Executive Director Stephanie Dainow participated in the Decentralized Science and Blockchain session as a part of the Emerging Tech Workshop at the world’s largest annual Aging Research and Drug Discovery conference (9th ARDD).

Longevity Camp: The Longevity Summer Camp is a four-day retreat featuring people from many longevity-related walks of life. Recently, somewhere between the former gold mining town of Nevada City and the infamous Donner Pass, a unique gathering took place.

Steve Horvath on the Present and Future of Epigenetic Clocks: Dr. Steve Horvath is the inventor of the epigenetic clock and, currently, principal investigator at Altos Labs. We talked about the recent developments in this immensely important field, including pan-mammalian clocks, two-species clocks, and single-cell clocks, along with the challenges the field faces.

Prof. Albert-László Barabási on Network Medicine: Albert-László Barabási is the Robert Gray Dodge Professor of Network Science at Northeastern University, and he also holds an appointment in the Department of Medicine at Harvard Medical School. We talked about a revolutionary ‘network medicine’ approach that can greatly enhance our ability to understand biological processes and seek cures for disease.

Martin O’Dea Talks About the Longevity Summit: We recently had the opportunity to speak to Martin O’Dea about a new longevity-focused event happening in Ireland’s capital city on September 18th-20th. Martin holds an MBS and is a business lecturer at Dublin Business School in Dublin, Ireland. He is also the author of Beyond the Subjectivity Trap.

Vitamin D Fails to Improve Bone Health in Mega-Study: A high-quality, randomized, controlled trial found no effect of vitamin D supplementation or blood levels on the incidence of fractures in an aging population.

Hesperetin Upregulates Metabolism and Longevity in Mice: Researchers publishing in Journal of Biomedical Science have concluded that hesperetin, a compound found in various herbs, improves longevity in mice by promoting the expression of the pro-longevity gene Cisd2.

Ghrelin Is Associated with Worse Muscle Aging in Mice: A team of researchers publishing through Multidisciplinary Digital Publishing Institute has described an association between ghrelin and skeletal muscle aging in mice. Ghrelin is a peptide containing 28 amino acids. Its main function is to stimulate the appetite through receptors in the hypothalamus.

Sauna Combined with Exercise Improves Cardiovascular Health: In a randomized, controlled trial, scientists have shown that sauna and exercise, when taken together, might have a synergistic, beneficial effect on cardiovascular health and cholesterol levels. Sauna bathing has been credited with many health benefits, predominantly for the cardiovascular system.

Developing Nanobodies to Fight Parkinson’s Disease: A team of researchers publishing in Nature Communications has described nanobodies that can destroy the α-synuclein aggregates that characterize Lewy bodies, which are associated with dementia and Parkinson’s disease. Traditional antibody therapies, while promising in some studies, are too large to enter cells in order to affect the aggregates there.

Scientists Move the Boundaries of Post-Mortem Recovery: Researchers have been able to achieve substantial recovery of cellular and organismal activity in pigs that had been dead for a full hour. Advances in resuscitation have already moved the boundaries of life and death, making it possible to revive a person several minutes after the heart stops beating.

Hypertension Is Associated with Brain Drainage Changes: Researchers publishing in Aging have found that enlarged perivascular spaces in the brain are correlated with vascular disorders. These spaces, which are part of the brain’s glymphatic system, allow for the drainage of potentially dangerous metabolites such as beta amyloid.

Identifying Mitonuclear Genes for Longevity: Publishing in GeroScience, a team of researchers that included Nir Barzilai and Matt Kaeberlein examined genes that may affect both mitochondria and lifespan.

Dietary Restrictions Do Not Help Cognitive Function in Mice: A new study published in Neurobiology of Aging has shown that neither caloric restriction nor intermittent fasting improve late-life cognition in genetically diverse mice, but the effect depends on genetic composition.

Combining Senolytic Pathways Has Synergistic Effects: A team of researchers have explained in Aging how multiple compounds that target the BCL-2 protein family are considerably more effective against senescent cells than each compound by itself.

The Relationship Between Stroke and Inflammation: Publishing in Aging, a team of Chinese researchers has provided evidence showing a relationship between systemic inflammation and prognosis after a stroke. As the researchers point out, strokes are the leading cause of death in China.

Rapamycin and Metformin Show Synergy in Mice: Scientists have found that rapamycin and metformin work hand in hand in diabetes-prone mice, boosting each other’s effectiveness and blocking side effects. Both have been in use for various indications for decades and have decent safety profiles.

Plasma Dilution Appears to Rejuvenate Humans: Published in GeroScience, a groundbreaking study from the renowned Conboy lab has confirmed that plasma dilution leads to systemic rejuvenation against multiple proteomic aspects of aging in human beings. This paper takes the view that much of aging is driven by systemic molecular excess of signaling molecules, antibodies, and toxins.

Intravenous Stem Cells Alleviate Guinea Pig Osteoarthritis: Scientists have shown that intravenous delivery of mesenchymal stem cells, which has some advantages over the more conventional intra-articular injection, alleviates age-related osteoarthritis and decreases inflammation in guinea pigs. Osteoarthritis, a degenerative joint disease, is one of the most common causes of disability in old age.

Glycans as Biomarkers of Aging: In a new review published in Clinica Chimica Acta, researchers from the University of Zagreb discuss immunoglobulin G glycans, the changes that their composition undergoes with aging, and their potential as biomarkers of aging. One of the review’s co-authors is Prof. Gordan Lauc, who gave a presentation on them at EARD2022.

Association of Leisure Time Physical Activity Types and Risks of All-Cause, Cardiovascular, and Cancer Mortality Among Older Adults: There were significant associations between participating in 7.5 to less than 15 MET hours per week of any activity and mortality risk.

Suppression of trimethylamine N-oxide with DMB mitigates vascular dysfunction, exercise intolerance, and frailty associated with a Western-style diet in mice: These therapies may be promising for mitigating the adverse effects of a Western diet on physiological function and thereby reducing the risk of chronic diseases.

Canagliflozin retards age-related lesions in heart, kidney, liver, and adrenal gland in genetically heterogenous male mice: Canagliflozin can be considered a drug that acts to slow aging and should be evaluated for potential protective effects against many other late-life conditions.

Long-lasting, dissociable improvements in working memory and long-term memory in older adults with repetitive neuromodulation: These findings demonstrate that the plasticity of the aging brain can be selectively and sustainably exploited using repetitive and highly focalized neuromodulation

Supplementing Glycine and N-Acetylcysteine (GlyNAC) in Older Adults Improves Aging Hallmarks: By combining the benefits of glycine, NAC and GSH, GlyNAC is an effective nutritional supplement that improves and reverses multiple age-associated abnormalities to promote health in aging humans.

VitaDAO Funds ApoptoSENS Project for $253,000: Preventing the dysfunction of natural killer cells may be a promising area to explore in the fight against cellular senescence. Researchers are hoping to define the correlation between the increase in senescent cells and the onset or worsening of disease in humans.

VitaDAO Backs Research into Chronic Oral Disease: Periodontal disease affects more than 47% of adults aged 30 and over. For people over 65 years of age, that number rises to over 70%, making periodontitis one of the most commonly observed age-related illnesses. Jonathan An’s lab seeks to research inflammation-targeting compounds that can help treat periodontal disease.

Researchers Propose Five New Hallmarks of Aging: Publishing in Aging five months after their panel discussion in Copenhagen, many well-known researchers have explained their reasons for wishing to add new hallmarks of aging to the existing paradigm. Longevity Investors Conference: Organized and sponsored by Maximon, the Longevity Investors Conference is focused on the investment aspects of longevity. The LIC welcomes everyone with an interest in the financial aspects of the longevity sector, including venture capitalists, asset managers, and managers of private equity funds and private banks.

Longevity Summit Dublin: This conference will feature two days of inspiring research developments along with top longevity entrepreneurs, biotech companies, longevity investors, and researchers from around the world.