The drug is specifically made to enter mitochondrial membranes. 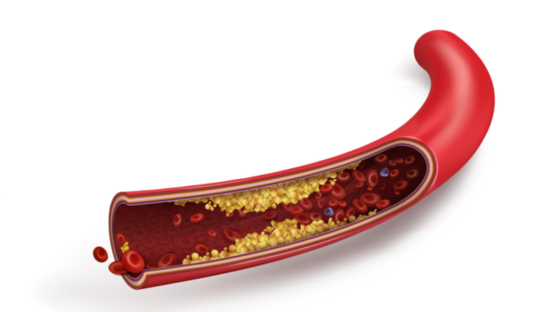 Scientists have drastically improved various symptoms of atherosclerosis in mice by precisely targeting mitochondria with a plant-derived antioxidant [1].

Atherosclerosis, the accumulation of plaques on arterial walls, is one of the deadliest age-related diseases. Atherosclerotic plaques, which consist mostly of cholesterol and fat, can impede blood flow in the artery or burst, resulting in a blood clot.

However, several clinical trials have shown only limited effectiveness of anti-ROS therapies against atherosclerosis. According to the authors of this new study, one potential explanation is the problem in getting the drugs inside the mitochondria. Recently, an interesting new strategy emerged: coupling antioxidants to a triphenyl phosphonium cation (TPP+). Being positively charged, TPP+ is attracted to mitochondria because of the negative mitochondrial membrane potential, bringing the drug molecule along. The first compound that works that way, mitochondria-targeted ubiquinone (MitoQ), has already shown some promise [2] and is marketed as a supplement.

Mice without the “longevity gene”

Esculetin is a phytochemical of the coumarin family, which is found in several medicinal plants. It has been known primarily as a potent antioxidant, but it also possesses anti-inflammatory qualities and can even decrease proliferation of cancer cells [3]. In this new study, the researchers coupled esculetin with TPP+, calling the resulting compound Mito-Esc, to treat APOE knockout mice, which are prone to age-related atherosclerosis.

The gene APOE produces apolipoprotein E, which plays a crucial role in cholesterol transport, and is one of the very few known genes that are associated with longevity, with the rare APOE2 allele found disproportionately in long-lived people [4]. Conversely, the APOE4 allele exacerbates the risk of atherosclerosis and Alzheimer’s disease. The APOE3 allele, which is considered neutral for longevity, is the most ubiquitous.

The mice were treated with a low dose of Mito-Esc from four to 18 months of age. By this time, the untreated APOE knockout mice were showing increased weight compared to wild-type controls, as well as high fasting blood glucose levels, insulin levels, cholesterol levels, and blood pressure. However, the Mito-Esc treatment significantly alleviated all of these symptoms.

Histological analysis of arteries showed that untreated APOE knockouts had amassed a lot of atherosclerotic plaques and fibrous connective tissue when compared to healthy controls. Mito-Esc largely prevented these changes as well.

The drug’s effect was evident in the mice’s physical condition as well. Treated APOE knockouts were able to stay up to six times longer on a a rotating rod, which is used to assay strength, stamina, and coordination, than their untreated counterparts. As a bonus, Mito-Esc decreased anxiety in the treated mice.

As atherosclerosis is basically a chronic inflammatory disease, the researchers checked for a wide array of inflammatory markers, such as MCP-1, TNF-α, IFN-γ, and IL-6. Untreated APOE knockouts exhibited increased inflammation, while in the study group, inflammation was substantially lower and, for some markers, almost on par with healthy controls.

Atherosclerosis is also accompanied by increased cellular senescence, and untreated APOE knockouts did have much higher levels of all major senescence markers (Beta-galactosidase, p16, p21, and p27). Interestingly, the transcription levels of TERT, telomerase reverse transcriptase, were also low compared to controls. TERT is the enzyme that preserves telomeres, and its decline has been linked to age-related cellular senescence.

The researchers then confirmed that these results are truly due to Mito-Esc’s benefits for ailing mitochondria. In untreated APOE knockouts, the levels of two mitochondrial health markers, SIRT3 and Pgc-1α, were extremely low, but in treated mice, they were even higher than in healthy controls. Mito-Esc also significantly improved mitochondrial respiration, the mitochondrial processes that produce energy from nutrients.

Building on previous research, this study demonstrates that esculetin, when precisely aimed at mitochondria, can dramatically alleviate atherosclerosis induced by APOE knockout in mice. While promising, the study was limited by its small size, but we should see more studies like this in the near future.