These vesicles restore senescent cells instead of killing them. Small extracellular vesicles are one of the ways in which cells communicate with each other [2]. Basically, cells engulf molecules, such as proteins, DNA, and RNA, in pieces of their cellular membranes and let those vesicles float until they bump into another cell and unload their cargo.

Aging involves the dysregulation of multiple functions, and intercellular communication is not an exception. Aging cells start sending out botched signals, contributing to further dysregulation in a feedback loop. Altered intercellular communication is one of the hallmarks of aging [3], and recent studies have found that injecting extracellular vesicles produced by young cells into older animals seems to be beneficial in various ways [4].

In this new study, the researchers chose young adipose-derived (taken from fat tissue) stem cells as their donor cells. Two doses of small extracellular vesicles secreted by those cells were injected into naturally aged mice one week apart, and data was collected during the one-month follow-up period.

The treated mice showed greatly improved fitness, as measured by grip strength, motor coordination, and the composite frailty score developed by the researchers. Mice in the control group had higher average frailty scores at baseline, but the results were still very convincing: while control mice became much frailer during the follow-up period, frailty in the study group was all but eradicated by the treatment. Treated mice also showed considerable hair regrowth compared to balding controls. 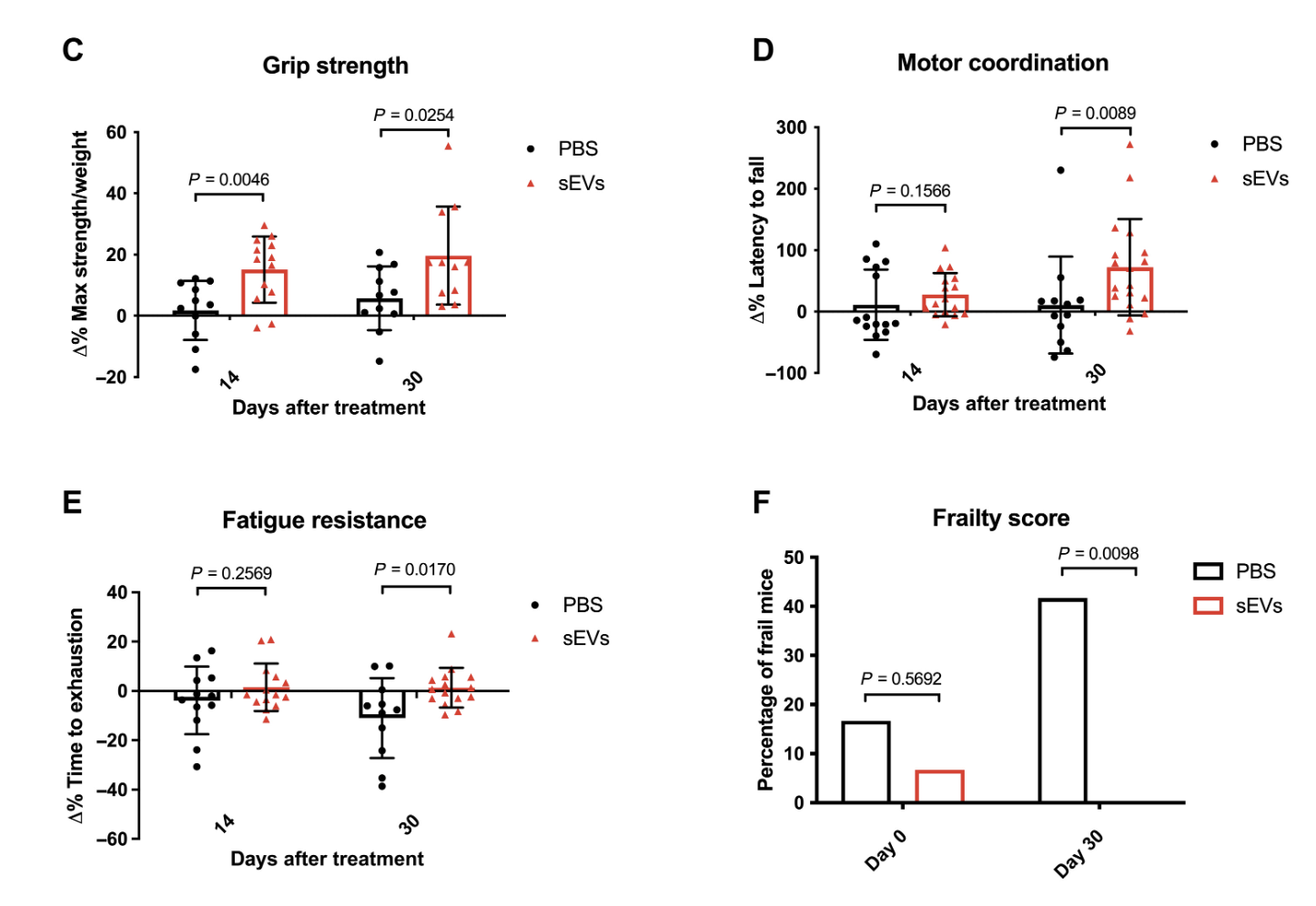 The researchers also performed histological analyses of kidneys and muscle. In the kidneys, they looked for signs of tubular atrophy and interstitial fibrosis, two changes that are associated with aging and known to cause loss of renal function. The treated mice fared much better in tubular dilation and density, and they showed mild improvement in renal fibrosis, although this was not statistically significant. This pointed to renal regeneration that could have been driven by proliferating cells. Indeed, the proliferation of tubular epithelial cells, the workhorses of the kidneys, increased almost four-fold.

With age, the levels of inflammatory cytokines in the blood increase driving inflammaging, the age-related, organism-wide inflammation that contributes to many other age-related conditions [5]. The researchers measured the levels of two such cytokines, IL-6 and IL-1ß, and found that both were drastically decreased in both the kidneys and muscles of the treated mice.

Both cytokines are abundant in the senescence-associated secretory phenotype (SASP), a mix of mostly harmful molecules released by senescent cells. Therefore, the researchers checked for markers of cellular senescence, and, sure enough, those were much lower in the treated mice. Interestingly, in a pattern similar to that of cytokines, the decrease was more noticeable in the kidneys than in muscle.

The intrigued researchers performed an in vitro experiment on muscle progenitor cells (myoblasts). First, they induced cellular senescence using the drug palbociclib. After a while, the newly senescent cells were treated with the same extracellular vesicles that had been used in the in vivo experiments. As a result, senescence markers in the culture dropped sharply, while proliferation increased. Notably, this approach was not a senolytic, as it did not kill the senescent cells; instead, it was a senomorphic, as it reverted their senescent phenotype.

The researchers also measured the epigenetic age of the tissues using several murine clocks. A score composed from the readings of all the clocks showed robust age reversal in kidneys but not in muscle. Finally, quantification of 87 metabolites in blood plasma samples revealed that the treatment shifted the mice’s metabolome towards that of young mice.

The current study confirms that extracellular vesicles from young stem cells can have a considerable rejuvenating effect both in vitro and in vivo and suggests their senomorphic action as a possible mechanism. Therapy-wise, extracellular vesicles might have some important advantages over stem cells: for instance, they are more palatable for the host’s immune system, and they can be continuously harvested from cultured stem cells. The researchers note that the treatment’s effect is finite and seems to disappear after about two months, so if this technology ever makes it to the clinic, periodic treatments might be needed.