Why we Age: Altered Intercellular Communication

Altered intercellular communication, as described in the Hallmarks of Aging [1], is the change in signals between cells that can lead to some of the diseases and disabilities of aging. It is also one of the nine reasons we age.

As we age, the signaling environment of chemical messages across the whole body tends to become more inflammatory, inhibiting the immune system and potentially causing muscle wasting, bone loss and other harmful effects [1] in a process known as inflammaging.

Multiple different factors cause this inflammaging, one of which – the senescence-associated secretory phenotype (SASP) – is directly caused by another hallmark of aging, cellular senescence. Senescent cells are known to secrete an inflammatory, immunosuppressive, and harmful mixture that has been shown to encourage neighboring cells to become senescent and may contribute to multiple age-related diseases [2, 3, 4]. This mixture is known as the senescence-associated secretory phenotype.

Beyond the SASP, senescent cells have been shown to encourage senescence in nearby cells through so-called bystander effects, including the secretion of DNA-damaging chemicals known as reactive oxygen species (ROS) and the leakage of chemicals from senescent cells into neighboring cells through gap junctions, which are holes between their surfaces.

The smoldering, consistent growth in inflammation across the body leads to cells increasingly activating a chemical in their nuclei, nuclear factor kappa-light-chain-enhancer of activated B cells (NF-kB), which regulates inflammation. NF-kB is is a protein complex that regulates the production of proteins, enzymes, and local signals (cytokines). It is present in almost all cell types and is involved in cellular responses to stimuli such as stress, cytokines, free radicals, heavy metals, radiation, oxidized LDL cholesterol, and bacterial or viral antigens. NF-kB can be considered a master regulator of cell activity, and its increase can lead to harmful consequences.

Beyond its association with other diseases, when NF-kB is activated in the hypothalamus, a region of the brain dedicated to maintaining normal bodily function, it has been shown to inhibit the production of gonadotropin-releasing hormone (GnRH) [5]. This hormone is used to signal other bodily systems, and its reduction may contribute to bone fragility, muscle weakness, skin degradation, and other harmful effects with age.

How can this hallmark be treated?

This particular hallmark of aging is closely associated with other hallmarks, such as cellular senescence, so treating those may have an added benefit in treating this hallmark.

A major approach used in lab animals to try and treat this hallmark involves decreasing energy intake through food while maintaining nutrient intake, which is known as caloric restriction (CR). CR has been shown to significantly increase lifespan in a variety of animals, including mice [6] and a species of worm called C. Elegans [7], and a number of approaches are being tested to try and replicate this effect without requiring a strict diet. However, while it has been shown to be very effective in short-lived creatures, longer-lived creatures seem to receive much smaller gains in lifespan from CR if papers are compared [7], [8], indicating that it may not be an effective approach in humans.

Another approach to treating this hallmark is based on parabiosis – the merging of the circulatory systems of two individuals. This has been shown to have beneficial impacts on various aging-associated factors in mice [9], but the cause of the benefits is unclear.

According to a paper co-authored by Irina Conboy, a member of LEAF’s scientific advisory board, blood from older creatures can be harmful to younger creatures [10], perhaps due to signaling molecules used for intercellular communications within the old blood. This could suggest that at least part of the benefit of parabiosis is due to the dilution of harmful signals.

As she explained in an interview with LEAF, a route that is being explored to treat this hallmark is apheresis, in which blood is removed from the body, the pro-aging signaling molecules are removed, and the blood is reintroduced; this is an attempt at mimicking the effect of parabiosis.

Altered intercellular communication is mainly caused by other hallmarks, particularly cellular senescence. Therefore, senolytics, many of which are already in human clinical trials, may be a valid treatment option, or the hallmark may be treated directly through apheresis.

Through the activation of NF-kB and the inhibition of the hormone GnRH, altered intercellular communication is thought to contribute to a variety of age-related diseases. Therefore, treating this hallmark may have a wide-ranging impact on health and disease in old age. 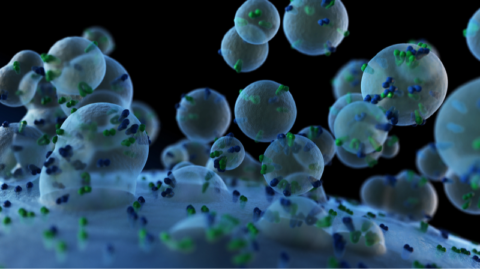 Today, we want to highlight a recent review that charts the pro-inflammatory signals produced by senescent cells [1]. What is the senescence-associated secretory phenotype? As we grow older, an increasing number of aged cells in our body enter a state called senescence. At this point, the cells no longer divide and, under normal conditions, should...