Publishing in Free Radical Biology and Medicine, a team of Chinese researchers has investigated the potential role of autophagy in fighting oxidative stress and potentially staving off age-related macular degeneration (AMD).

AMD comes in two major forms. In the nonexudative (dry) form, material builds up behind the retina, while in the exudative (wet) form, abnormal blood vessel growth occurs instead [1]. Wet AMD can be treated with regular injections [2], but dry AMD has no current treatment. Both forms lead to blindness, and AMD is the leading cause of vision loss in the elderly.

Some previous work has shown that oxidative stress plays a major role in the development of AMD [3]. Autophagy, the process of cells consuming their own organelles, declines with aging [4] and is known to serve protective functions against oxidative and other stresses [5]. Therefore, the researchers hypothesized that enhancing autophagy could be an effective strategy for fighting untreatable AMD.

To do this, the researchers turned to lactate, a well-known product of exercise. Lactate has been previously shown to protect against oxidative stress [6], and it protected neurons and reduced inflammation in a mouse model of glaucoma [7].

For these experiments, the researchers used ARPE-19, a line of human retinal pigment epithelium (RPE) cells, which are the cells most directly affected by AMD and are particularly vulnerable to oxidative stress [8]. To model this stress, they treated these cells with hydrogen peroxide. Interestingly, they found that very small amounts of hydrogen peroxide encourage autophagy and the production of lactate within the cells; to prevent this from altering their experimental data, they chose a higher dose of 600 micromoles, even though that significantly decreased cell viability.

Then, they introduced external sources of lactate. Cells given this lactate had slightly but significantly higher viability along with visible signs of increased autophagy. Introducing a chemical that inhibits autophagy neutralized the effects of the lactate, which is evidence that the autophagy was responsible for the increased viability.

Lactate was also shown to help mitochondria against oxidative stress. Mitochondrial fission and membrane potential were harmed by hydrogen peroxide, and both of these problems were somewhat alleviated by lactate. Lactate pretreatment also significantly reduced the mitochondrial production of reactive oxygen species (ROS); here, introducing another chemical that inhibits autophagy once again neutralized the effects of lactate.

To validate their cellular work, the researchers turned to mice injected with sodium iodate in a known model of retinal degeneration [9]. With lactate treatment, the number of cells visibly harmed by the sodium iodate, as determined by chemical staining, were substantially decreased. Just like in the cellular experiments, inhibiting autophagy neutralized the effects of the lactate. 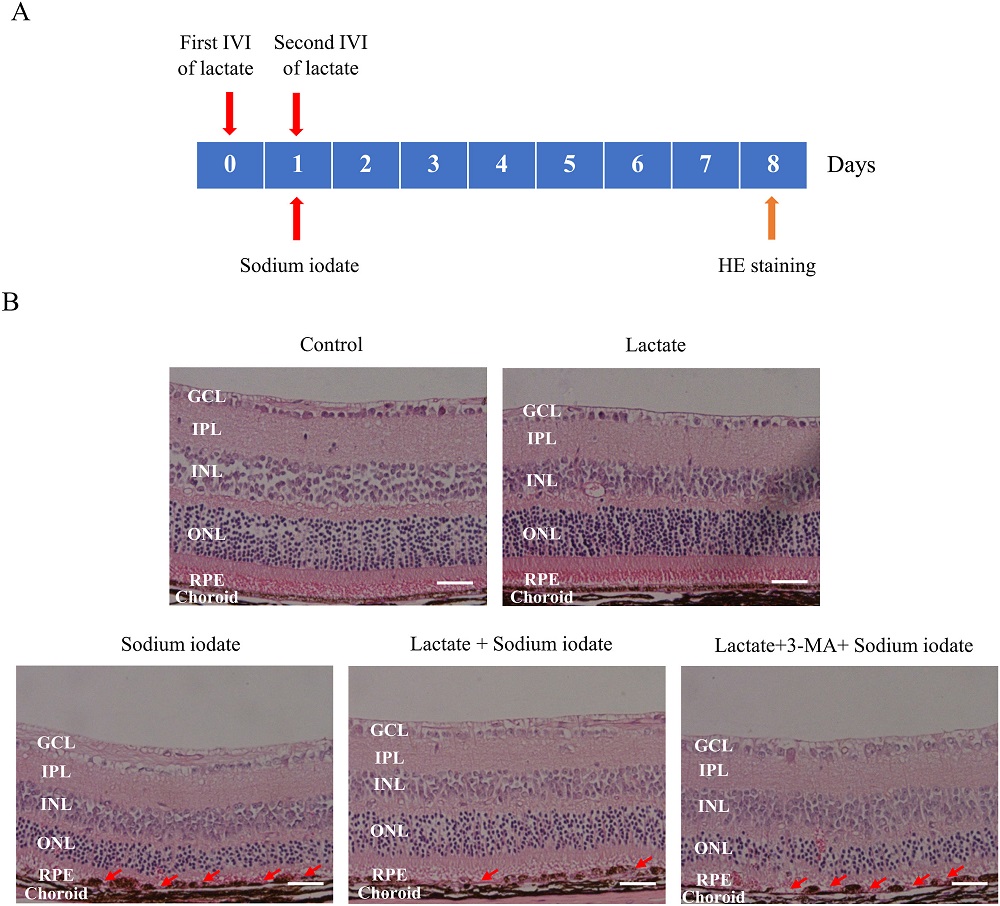 These results are promising, but this research remains initial and exploratory. The cellular and murine experiments were done with chemical insults rather than genetics. Oxidative stress is unlikely to be the sole factor in the progression of AMD. Further preclinical work, in better models of AMD, will need to be done before this research can progress into human clinical trials.

However, these results may represent a low-hanging fruit, and lactate is a naturally forming chemical that may also have anti-cancer properties. If oxidative stress is found to be a major contributor to AMD and can be successfully ameliorated, it may be possible to help stave off AMD and similar diseases and help people keep their vision for longer.