This chemical has helpful and harmful effects. 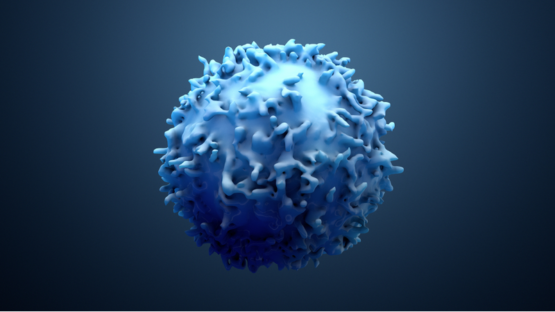 As a means of energy production, the Krebs cycle is preferred by most cells in most conditions. However, there is also a seemingly less efficient and more ancient method: anaerobic glycolysis. While it produces much less energy per one glucose molecule, it is fast and does not require oxygen, which is why it is turned on in muscles when we are working out. This leads to accumulation of lactic acid, a waste product and the cause of the familiar post-exercise muscle pain.

However, most cancer cells also prefer getting their energy via glycolysis even when oxygen is abundant. This is called aerobic glycolysis or the Warburg effect [2]. The reasons for this paradox are still poorly understood, but scientists suspect that, beside energy, aerobic glycolysis produces metabolites that enhance the tumor’s defenses. For example, lactic acid production leads to accumulation of lactate (lactic acid’s conjugate base) and an increase in the acidity of the tumor microenvironment – something that immune cells very much dislike [3].

However, a novel hypothesis that the researchers set out to test postulates that lactate by itself has a positive effect on anti-tumor immunity, which is simply overshadowed by the acidity. Interestingly, one earlier study found that lactate mediates immune protection induced by exercise [4].

Great by itself, greater in combination

The researchers subjected mice with M38 colon cancer tumors to subcutaneous administration of sodium lactate or glucose as control. Sodium lactate, the sodium salt of lactic acid, is used in the food industry, cosmetics, and in medicine to treat metabolic acidosis and some arrhythmias.

Amazingly, sodium lactate proved to be highly effective in suppressing tumor growth. However, it did not work in Rag1-knockout mice, which are unable to produce B or T cells. Of various types of immune cells, only depletion of CD8+ (cytotoxic) T cells abolished the effect of the sodium lactate treatment, pointing at those cells as the sole mediators of sodium lactate’s tumor-suppressing effects.

The researchers then wanted to see how sodium lactate stacks up against two existing drugs that enhance anti-tumor response by T cells – a PD1 checkpoint inhibitor and the PC7A nanovaccine [5] – and whether it would work synergistically with any of them. In the experiments with three different cancer types, both the PD1 inhibitor and the vaccine showed some anti-tumor effectiveness, although it was a far cry from that of sodium lactate. However, combining any of the drugs with sodium lactate indeed produced remarkable synergy, leading to an even more pronounced inhibition of tumor growth. As a result, half of the combination-treated mice survived and lived on cancer-free, while all others died within 40-50 days.

Further analysis showed that sodium lactate facilitates infiltration of the tumor by T cells and significantly improves their function. The treatment also decreased the number of T cells in the tumor that had died by apoptosis.

The researchers also found that sodium lactate enhances the function and survivability of cytotoxic T cells by increasing their stemness. Stem-like T cells express the transcription factor TCF1 and are characterized by increased self-renewal, multipotency, and persistence. As a result, these cells do most of the heavy lifting in destroying the tumor.

Pre-treatment in vivo works too

In their next experiment, the researchers treated donor-derived human T cells with sodium lactate in vitro. Just like in vivo, the treatment increased the cells’ stemness by upregulating TCF1 and several other stemness-related proteins. The treatment also decreased the percentage of apoptotic cells.

Lactate may seem an unlikely anti-cancer drug candidate, since lactic acid actually helps tumors evade immune defenses. However, this intriguing study shows that when taken out of the context of tumor acidity, sodium lactate can significantly impede, and even revert, tumor growth, especially when combined with some existing anti-cancer medications – a new paradigm that probably deserves additional research. One of its obvious advantages is the ability to induce the stem-like phenotype in T cells in vitro. The researchers suggest that sodium lactate can be used that way to increase the effectiveness of CAR-T cell therapy.