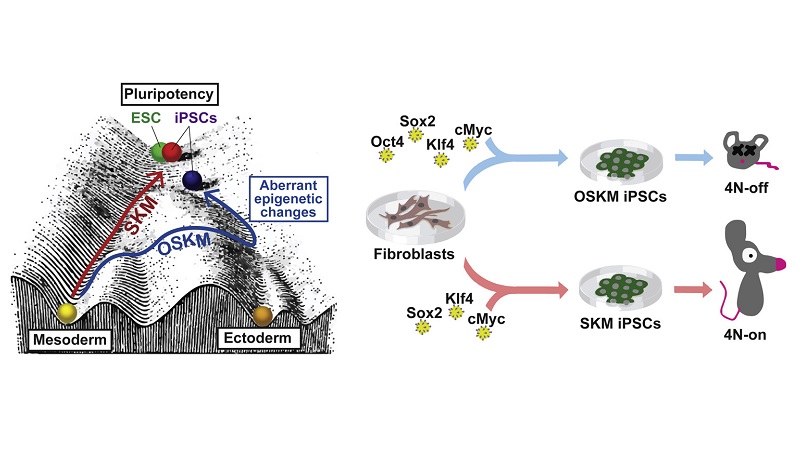 Pluripotent stem cells are cells that can become other cell types in the body; during natural development, they create differentiated stem cells and ultimately somatic cells, which are the mature cells that actually carry out bodily functions. In 2006, Drs. Takahashi and Yamanaka discovered that it was possible to induce pluripotency in somatic cells with four factors: Oct4, Sox2, Klf4, and c-Myc, which are collectively known as OSKM. Obviously, inducing full, embryo-like pluripotency in existing tissues is harmful, as the cells forget what they are and what they are supposed to be doing, but inducing pluripotency is a method of creating viable stem cell populations for research and therapeutic use.

This is not the first research into alternatives to the four OSKM factors. Turn.bio has experimented with the additional factors LIN28 and Nanog to create the OSKMLN cocktail. A previous study had shown that precise Oct4 expression is required for proper reprogramming.

This study, however, shows that introducing Oct4 as part of the OSKM cocktail is not only unnecessary, it causes the overexpression of Oct4, leading directly to epigenetic aberrations and off-target gene activation – not things that researchers want stem cells to be doing! The researchers hypothesize that Oct4 was originally considered an indispensable part of the cocktail due to the silencing of the retroviral factor used to induce pluripotency: an artifact of the process rather than a true biological necessity.

Oct4 is widely considered the most important among the four Yamanaka reprogramming factors. Here, we show that the combination of Sox2, Klf4, and cMyc (SKM) suffices for reprogramming mouse somatic cells to induced pluripotent stem cells (iPSCs). Simultaneous induction of Sox2 and cMyc in fibroblasts triggers immediate retroviral silencing, which explains the discrepancy with previous studies that attempted but failed to generate iPSCs without Oct4 using retroviral vectors. SKM induction could partially activate the pluripotency network, even in Oct4-knockout fibroblasts. Importantly, reprogramming in the absence of exogenous Oct4 results in greatly improved developmental potential of iPSCs, determined by their ability to give rise to all-iPSC mice in the tetraploid complementation assay. Our data suggest that overexpression of Oct4 during reprogramming leads to off-target gene activation during reprogramming and epigenetic aberrations in resulting iPSCs and thereby bear major implications for further development and application of iPSC technology.

One thing is certain, though: Understanding stem cell reprogramming is vital to understanding the changes in epigenetics that occur during this process. Epigenetic alterations are one of the primary hallmarks of aging, and resetting epigenetics through partial cellular reprogramming may provide a treatment for this hallmark; such a treatment would likely have downstream effects that could greatly increase longevity. Turn Biotechnologies
About the author