A new study published in Aging shows that metformin, a drug that has been studied for its effects on longevity, restores mitochondrial function and repairs metabolic defects in cells from people with myotonic dystrophy, a condition that shares many of the same characteristics as aging.

Myotonic dystrophy is a genetic disease that causes muscular weakness and atrophy along with multiple other disorders. As the researchers explain, it has two main types: DM1 and DM2. DM1 is both more severe and more common, and the researchers note that its effects share many similarities with the hallmarks of aging, including cellular senescence, genomic instability, telomere attrition, and deregulated nutrient sensing.

DM1 also harms the ability of mitochondria to perform their most fundamental task, which is the conversion of food into ATP; it causes one major pathway, oxidative phosphorlyzation (OXPHOS), to lose half of its ability to do this. DM1 cells also respond poorly to metabolic stresses, being largely unable to increase production when needed.

As a potential treatment for this disease, the researchers of this study turned to metformin, a drug that is known to have a beneficial influence on mitochondria [1].

The results of the study were clear. As the graphs show, the use of metformin resulted in increases of cellular respiration and ATP production close to the level of the control group, and it substantially reduced production of hydrogen peroxide, a reactive oxygen species (ROS) that leads to oxidative damage. 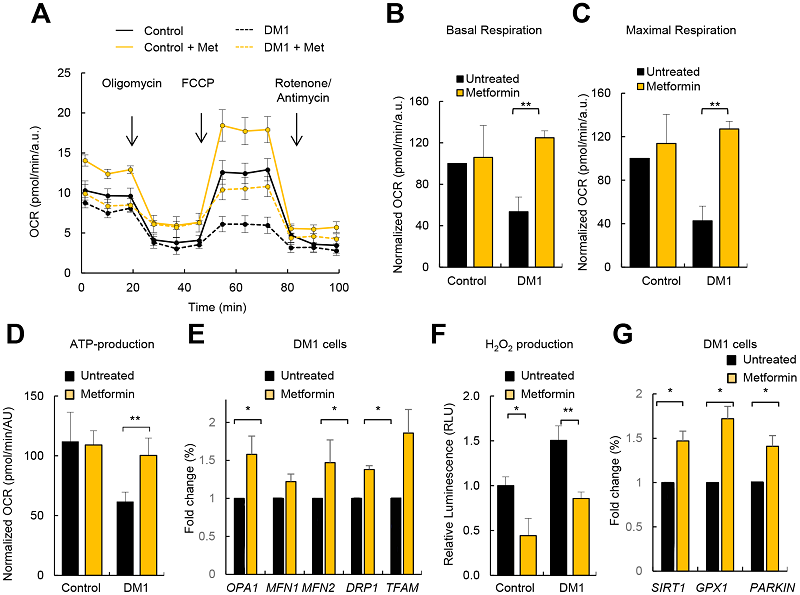 The study also showed that metformin increases cell division and viability in DM1 cells, decreasing markers of senescence such as p16Ink4a and p21CIP.

This is a cell study, not a clinical trial. While the cells used are from human beings and not mice, the results of cell studies cannot always be replicated in clinical trials. Additionally, as myotonic dystrophy is a genetic disease, the only potential true cure is a genetic one; while drugs such as metformin may be instrumental in treating the symptoms, they cannot treat the cause.

That said, however, it may be possible that metformin will offer new hope for sufferers of myotonic dystrophy or other disorders that negatively impact metabolism, and this study also helps put together disparate hallmarks of aging, such as mitochondrial dysfunction and cellular senescence.