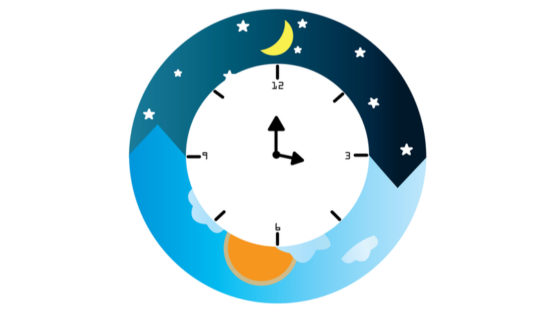 Researchers have found that CLOCK, a protein that regulates the circadian cycle of our cells, also fights cellular senescence by promoting chromatin stability [1].

Since its very beginning, life on Earth had to adapt to our planet’s natural 24-hour rotation cycle. Rising to the challenge, nature invented biological mechanisms called circadian clocks (from the Latin ‘circa’ – ‘around’ – and ‘diem’ – day) that regulate biological processes according to the time of day. They are present in most organisms, including bacteria, and they play an especially important role in the life of plants, which produce energy from light. Molecular circadian clocks work on a cellular level, but, in mammals, their activity is coordinated by a “master clock” located in the part of the brain called the superchiasmatic nucleus (SCN).

Cellular circadian clocks are groups of genes that regulate their own transcription and translation via a complex mechanism of negative-feedback loops, bringing hundreds of cellular processes into accordance with the night and day cycle. It is well established that, with age, these mechanisms become dysregulated, causing sleep disorders in older people [2]. Age-related degradation of the core circadian mechanisms in SCN has been confirmed in mice. This process has also been shown to induce stem cell aging and chronic age-related diseases, including osteoarthritis, metabolic and neurodegenerative disorders [3].

A transcriptional factor named CLOCK (Circadian Locomotor Output Cycles Kaput) plays a major role in this cellular symphony. Several studies suggest a link between CLOCK and aging. CLOCK deficiency is known to reduce lifespan and promote age-related pathologies, such as cataracts and dermatitis, in mice. CLOCK levels decline with age, as circadian mechanisms become dysregulated. This particular study was conducted to further elucidate the connection between CLOCK levels and aging.

As their main subjects, the authors chose human mesenchymal stem cells (hMSCs), which can differentiate into cells forming various types of connective tissues, such as bone and cartilage. Stem cell aging, and MSC aging in particular, is a major factor behind organismal aging and many age-related disorders.

The study confirmed that the age-related degradation of the circadian machinery happens during cellular aging as well as organismal aging. The researchers found amplitude dampening and period lengthening of the circadian cycles in late-passage (aging) MSCs. CLOCK became downregulated as well. The picture was similar on organismal level: having acquired cells from healthy human donors of various ages, the researchers found that CLOCK levels were generally lower in MSCs from older donors. Senescence levels also increased with age.

The researchers also discovered that this correlation could not be explained by CLOCK’s transcriptional activity: the effect endured even with CLOCK’s transcriptional ability knocked out. The authors were able to prove that the relation between CLOCK levels and cellular senescence stems from CLOCK’s role in supporting chromatin stability. CLOCK was found to form complexes with components of the nuclear lamina (the fibrillar network inside the nucleus) and with proteins that are known to stabilize heterochromatin. Downregulation of CLOCK during cellular aging resulted in the destabilization of heterochromatin, which, in turn, led to increased transcription of repetitive genomic sequences. Recently, we published an article about the detrimental effects of these sequences. Genomic instability, itself, is a major hallmark of aging.

Mechanistic studies further revealed that this is not a mere correlation: CLOCK indeed helps maintain heterochromatin structure and suppresses the proliferation of repetitive genomic sequences. Restored expression of CLOCK, or the heterochromatin-associated proteins that it assists, alleviated aging defects in MSCs. The researchers hypothesize that CLOCK functions as a scaffold protein that tethers heterochromatin components to the nuclear matrix. This suggestion is supported by the fact that another core circadian protein, PER2, also functions as a scaffold protein that helps maintain cellular homeostasis.

The scientists note that previous studies had shown CLOCK to be localized not only at the transcriptionally active regions, where it performs its main transcriptional duties, but also near condensed chromatin. This peculiar behavior can now be explained by the role that CLOCK plays in promoting chromatin stability.

The findings have also been confirmed in vivo: overexpression of CLOCK in mice using a viral vector resulted in cartilage regeneration and the attenuation of age-related articular problems.

Due to the immense complexity and the evolutionary character of cellular chemistry, proteins can perform multiple and additional roles, which seems to be the case with CLOCK and chromatin stability. Consequently, the upregulation of CLOCK could potentially become a two-pronged anti-aging intervention, simultaneously restoring circadian rhythms and reducing cellular senescence via improved chromatin stability.