The Development of Glowing Pluripotent Cells

Integrating fluorescence may be a key to getting some approaches developed more quickly. 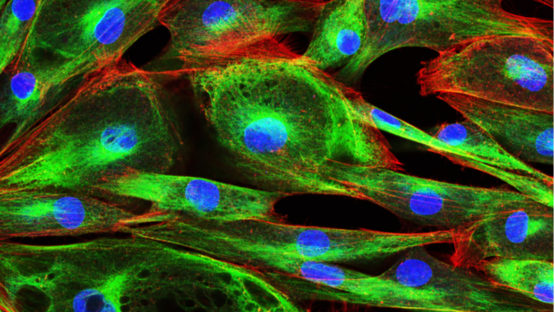 A team of Chinese researchers has described a novel method of illuminating pluripotent stem cells in a paper published in Aging.

Using a lentivirus, the researchers genetically engineered mouse embryos to express green fluorescent protein (GFP) when it expresses the Yamanaka factor Oct4. GFP, a harmless protein that glows bright green under ultraviolet light, has been used for decades in the bioengineering field as a visual indicator of various processes [1]. Therefore, the researchers reasoned, it could also be used as a visual indicator for pluripotency: the ability of cells to transform into many other types of cells.

Existing methods for analyzing cells, such as fluorescence-assisted cell sorting (FCAS) and reverse transcriptase polymerase chain reaction (RT-PCR), already use fluorescent tagging to detect what proteins are being expressed. By integrating pluripotency-activated fluorescence right into the cells themselves, this process would logically become much cheaper and easier.

In this paper, the researchers offer several related use cases for this technology, most of which involve reprogramming cancer cells into induced pluripotent stem cells (iPSCs).

Determining if it works

Using the Yamanaka factors, the researchers reprogrammed mouse embryonic fibroblasts (MEFs) into iPSCs and observed the results. 9 days after the introduction of these factors, the fluorescence became slightly apparent, at day 14, it was much more visible, and by day 24, it was strongly visible.

The researchers analyzed these cells with a conventional assay of Oct4 along with other factors known to be linked to pluripotency, such as Nanog, SSEA1, and the Yamanaka factor Sox2, and they found that the expression of GFP was colocalized with these compounds.

Further testing found that these genetically engineered cells induced to pluripotency behaved like normal embryonic stem cells, including in their cellular division cycles. Placing them into embryoid bodies caused these cells to differentiate into functional cells; in this experiment, they differentiated into cardiomyocytes (heart muscle cells). Injecting these iPSCs into mouse blastocysts let them grow into living chimeric mice, and injecting them into older animals generated teratomas, as expected.

Most importantly, Oct4 and GFP, alongside Sox2, decreased smoothly with differentiation, proving the usefulness of GFP as a marker for pluripotency: when the pluripotent state went away, so did the fluorescence.

Despite all the technological advancements made in this regard, biological experiments are neither easy nor cheap. A built-in visual indicator and fluorescence assay helper will surely aid the work of researchers attempting to create therapies that rely on pluripotent iPSCs – or, perhaps, therapies in which pluripotency is something to avoid.