This compound could be superior to dasatinib and quercetin. 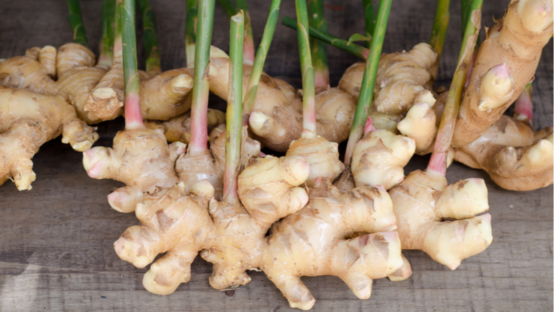 A paper supported by the National Institute on Aging has shown that gingerenone A, a component of ginger extract, is a natural senolytic that is potentially more powerful and less toxic than the combination of dasatinib and quercetin [1].

Ginger and many other plants are widely known for their anti-inflammatory effects. Cellular senescence, in turn, plays a major role in the age-related chronic inflammation known as inflammaging [2]. This prompted an investigation into four plant extracts to see if any of them actually influence cellular senescence.

The two molecules that worked

This paper focused on human fibroblasts, a widely accepted senescence model. In this study, cellular senescence, which can be triggered by various stressors along different pathways, was induced by ionizing radiation.

In the initial screening, only an extract of ginger (Zingiber officinale Rosc.) had shown a discernible senolytic effect and was chosen for further experiments. After testing several key components of ginger extract individually, the scientists found that only two, 6-shogaol and gingerenone A, decreased the viability of senescent cells following a 72-hour treatment. The researchers pitted these two molecules against the popular senolytic combination of dasatinib and quercetin (D+Q). 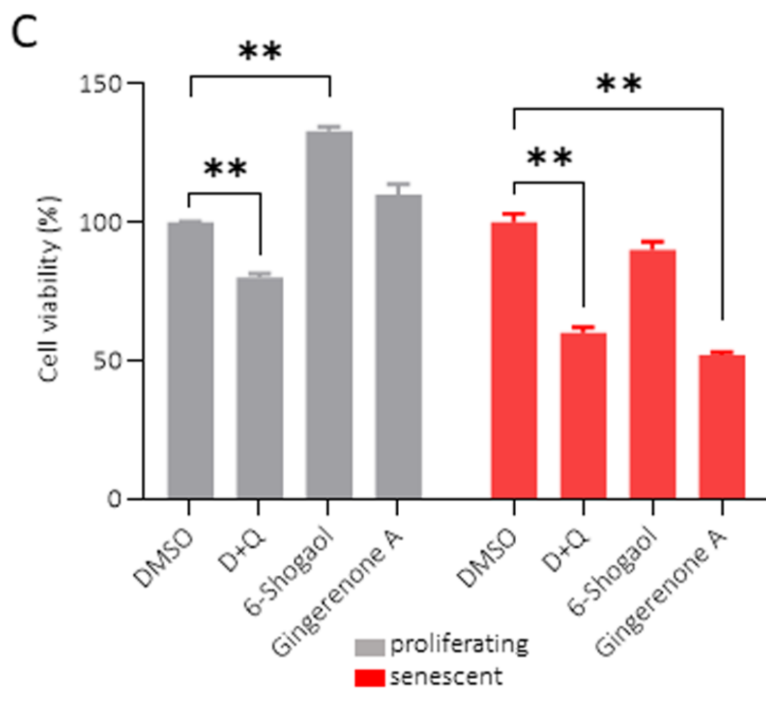 Different effects on the SASP

These experiments show that no two senolytics work in exactly the same way, which must be taken into account when developing actual therapies. It is likely that the future of senolytics lies in combination treatments; D+Q is already a combination of two molecules.

Senolytics usually work by restarting the apoptosis-inducing mechanism that gets “stuck” in senescent cells. Like senescence, apoptosis can be switched on via various pathways. Here, too, differences between the three compounds were evident. While D+Q significantly increased the levels of the protein p53, indicative of one of the pathways, gingerenone A and 6-shogaol did not. However, gingerenone A and 6-shogaol increased the levels of another pro-apoptotic marker, caspase-3, more than D+Q did. The researchers conclude that gingerenone A induces apoptosis via caspase-3 and not p53, although it is not entirely clear why 6-shogaol, which also led to an increase in caspase-3, was shown to be inferior to gingerenon A as a senolytic.

Some of the components in otherwise beneficial plant extracts might be useless or even harmful, or their proportions might not be ideal; after all, plants were not created by evolution to treat sick humans. By studying plant extracts, scientists might be able to reformulate them in a better, more effective way. In this case, gingerenone A might be able to do the heavy lifting of senolysis, while 6-shogaol provides additional benefits.

Toxicity is a known problem with some senolytics [4], as demonstrated by the damage inflicted on proliferating cells by D+Q in this study. Most phytoextracts, on the other hand, are known to be safe – yet another reason to look for new senolytics in the world of plants.

This new study shows that ginger’s famous anti-inflammatory effect might be explained, at least in part, by its senolytic properties. Gingerenone A, one of the ingredients of ginger extract, might even be superior in its senolytic action to the D+Q duo while also being less toxic to non-senescent cells.