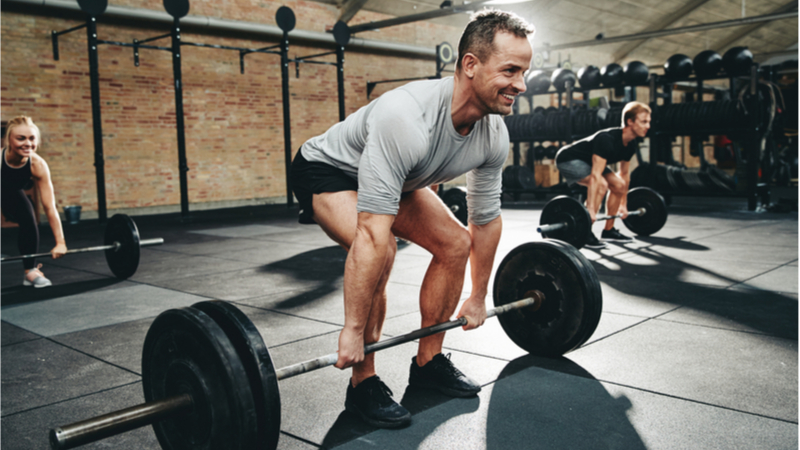 A new study suggests that we can actively fight back against age-related decline with resistance training to restore our levels of NAD+, a critical molecule used by the mitochondria in our cells to produce energy.

The mitochondria are the powerhouses of the cell, and they use the nutrients we consume in order to produce the energy that our cells need to function. Mitochondria rely on a supply of nicotinamide adenine dinucleotide (NAD+) in order for them to produce adenosine triphosphate (ATP), the form of chemical energy universally used by cells. NAD+ is a coenzyme found in all living cells; without it, life would be impossible.

In metabolism, NAD+ facilitates redox reactions, carrying electrons from one reaction to another. This process causes NAD+ to be found in two forms in the cell. NAD+ is an oxidizing agent that takes electrons from other molecules in order to become its reduced form, NAD+H. NAD+H can then become a reducing agent that donates the electrons it carries.

The transfer of electrons is one of the main functions of NAD+, though it also performs other cellular processes, including acting as a substrate for enzymes that add or remove chemical groups from proteins in post-translational modifications, performing cellular signaling, regulating metabolism, facilitating DNA repair, and engaging in many other functions within the cell.

Unfortunately, NAD+ declines with age due at least in part to the chronic systemic inflammation often referred to as inflammaging. This inflammation comes from various sources, including, but not limited to, senescent cell accumulation and the proinflammatory signals it produces, cell debris, immunosenescence, and changes to the gut microbiome.

There is currently a great deal of research focused on increasing levels of NAD+ in older people as well as a myriad of supplements and other kinds of therapies, not all of which are equal or proven to work in humans. The two most notable precursors of NAD+ biosynthesis, nicotinamide riboside (NR) and nicotinamide mononucleotide (NMN), have been of great interest to researchers as they both increase NAD+ directly and in multiple tissues.

While it may be the case that these approaches may prove useful, there is another way in which we all might offset NAD+ decline now: resistance training. Studies have already shown that exercise reverses age‐related decline in NAD+ salvage capacity, thus making more NAD+ available, and the research we want to cover today builds on this.

During the training, the participants, aged 55-63, were asked to rate the difficulty of the exercises from 0-10, with 0 being easy and 10 being hard. If an individual reported that an exercise was 10 or failed to complete an exercise session, then weight was reduced to make it easier; if the participant indicated that the difficulty was 7 or lower, more weight was added in order to increase the challenge. In this manner, the researchers were able to present an exercise routine that was challenging but not too punishing and that would adjust as people improved on an individual basis.

The results after ten weeks showed that NAD+ in muscle cells was more than doubled, making them similar to the levels present in a college-aged test group also part of the study.

The health benefits of exercise have long been known, and yet many of us do not exercise enough, which is a real problem in our increasingly sedentary world. Our ancestors were, generally speaking, considerably more physically active than the average person in today’s technological world.

There is an absolute raft of studies covering the effects of exercise and its relation to health; needless to say, we should all try to move more and engage in physical activity as much as we can as part of a healthy lifestyle. Even if you are middle aged, adopting healthy habits by 50 may add a decade to healthy lifespan. It may not sound like a lot, but a decade is a long time in the research and biotechnology world, and it could mean the difference between living long enough to see true anti-aging therapies arrive or not.