This traditional practice was found to have substantial physical benefits for the brain. 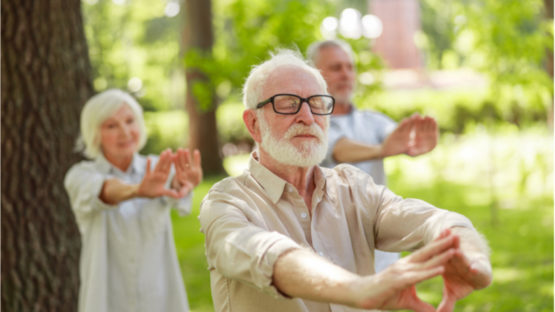 Researchers from the University of Hong Kong have found that qigong, an ancient Chinese mind-body practice, improves cognitive abilities, lowers inflammation, and increases the size of the hippocampus in elderly subjects [1].

A value to tradition

Scientists agree that if we want to live longer, exercise is still one of our best options. It has been shown to have positive effects on almost every aspect of aging, including age-related cognitive decline [2], which has been extremely resilient to medical interventions.

In ancient times, when people did not have much choice, physical and mental practices were a widespread healing and prevention tool. These practices, which include yoga, meditation, tai chi, qigong, and many others, had been largely ignored or ridiculed by the Western scientific community for the better part of the last century. After all, it was a period when conventional medicine was making great gains against infectious and many other diseases, and the average life expectancy was constantly rising.

However, some age-related diseases emerged as formidable enemies, and the average life expectancy in developed countries has plateaued since then. Age-related cognitive decline is a field where very few inroads have been made. This has been a source of frustration for longevity scientists: currently, it seems that even if we conquer other age-related killers, such as cancer, people would still be succumbing to the unstoppable advance of age-related cognitive decline.

The attitude towards traditional practices began to change in the 1980s, with many educated Westerners, including scientists in the medical field, turning their attention towards meditation. Since then, numerous studies have confirmed that meditation can attenuate depression, stress-related health effects including inflammation [3], and even age-related cognitive decline [4]. After all, there is nothing spurious in the idea that the mind can be exercised just like muscles.

Qigong is a traditional Chinese practice that combines many aspects of meditation with mild exercise. This last part makes qigong especially suitable for the elderly who often stop being physically active when usual types of exercise, such as running or hiking, become burdensome. This exacerbates health problems and accelerates the advance of frailty.

The authors of this new study note that quarantines triggered by the COVID-19 pandemic have further complicated things by rendering unattainable many physical activities on which people normally rely. Qigong, on the other hand, requires little space and can be practiced indoors.

For 12 weeks, the scientists studied two groups of about 25 people each: a study group that attended qigong sessions along with a control group where qigong was replaced with a similar amount of stretching exercises. Several parameters were measured before and after, including information processing speed, sustained attention, and hippocampal volume (hippocampal shrinkage has been associated with age-related cognitive decline) [5].

The researchers also analyzed the levels of interleukin-6 (IL-6), an inflammatory cytokine strongly linked to age-related neural inflammation and degeneration [6]. IL-6 levels in circulation have been shown to be inversely related to processing speed performance [7].

The results of the study show that subjects in the qigong group benefited from a statistically significant increase in information processing speed and sustained attention while their hippocampi became larger and IL-6 levels dropped. None of these effects were recorded in the control group.

Further analysis of the results revealed correlations between the parameters. For instance, in individual subjects, increase in hippocampal volume was linked to increase in sustained attention, while reduction in IL-6 levels correlated strongly with gains in processing speed.

The researchers also tested the subjects’ working memory but did not find any substantial correlation with the training. It could mean that qigong does not help to attenuate age-related memory loss, but the authors suggest that the short duration of the experiment might be responsible. Qigong is a complex practice, and 12 weeks might not be enough to reveal all its benefits.

The authors also note that in this study, the effects of qigong were compared to those of mild stretching exercises and not aerobic activity, which might have been even more effective. However, strenuous aerobic exercise might not even be an option for many elderly people.

The small sample size is yet another factor that might have affected the results. It is not uncommon for medical studies to be done on small samples, but the overall volume of research on qigong’s effects is still minuscule, which makes it impossible to interpret this study in the context of other similar studies or conduct a meta-analysis. Still, it is probably a good start.

There is a consensus emerging that traditional mind and body practices should be given a chance to prove themselves under rigorous research. Our growing understanding of neuroplasticity confirms that the human brain can be changed by experience. Hence, traditional practices aimed at doing just that, such as qigong, might prove helpful in slowing age-related cognitive decline, at least until science can provide a more robust alternative.