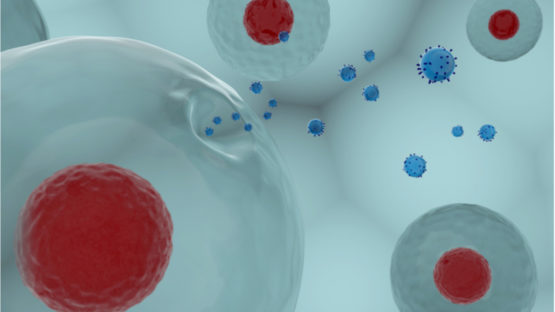 A new study in Aging Cell has shown extracellular vesicles from stem cells to extend healthspan and reduce cellular senescence in vitro and in mice.

Stem cell exhaustion is a well-studied hallmark of aging that occurs in multiple model organisms and multiple tissue types in humans. This has led to the hypothesis that bolstering these stem cell populations via transplantation could be an effective strategy to treat age-related disease and increase longevity. While many therapeutic benefits have been observed after stem cell transplantation, there is considerable debate about what role these cells are actually playing.

In many studies, the transplanted cells do not proliferate or survive for very long in their new hosts. They don’t always migrate to sites of damage or even leave the injection site, nor is differentiation towards more effector cell types, such as cardiomyocytes or neurons, frequently observed. While these activities are seen in some studies, other studies still observe therapeutic benefits in their absence. This has led to the hypothesis that the transplanted stem cells act through secreted factors such as cytokines and extracellular vesicles, rather than replacing depleted stem cell populations.

In a collaboration between the Scripps Research Institute and the University of Minnesota, the effects of secreted extracellular vesicles from mesenchymal stem cells (MSCs) on cellular senescence have been studied [1]. The researchers first observed dysfunctional phenotypes in the MSCs of aged mice. They then implanted transgenic Ercc1-/- mice, which have an extremely accelerated aging rate, with MSCs from old donors, healthy MSCs from young donors, and hypoxia-stressed MSCs from young donors. No change was seen in maximum lifespan, but median lifespan was dramatically extended in the treated mice, particularly those treated with the young, healthy cells.

They then isolated the extracellular vesicles from these MSCs and treated other cell types with them in vitro. Fibroblasts from Ercc1-/- mice and MSCs from aged wild-type mice showed increased function and fewer markers of cellular senescence, such as SA-β-gal staining, p16, p21, and SASP factors, when treated with conditioned media, especially from young MSCs. Similar effects, albeit to a lesser degree, were seen in experiments that used only isolated extracellular vesicles instead of conditioned media, which may also have additional factors. When Ercc1-/- and Zmpste24-/- mice, two different models of accelerated aging, were treated with these extracellular vesicles, various measures of cellular senescence were reduced. Further, the mice showed a significantly increased median lifespan, although maximum lifespan remained similar.

Overall, our results demonstrate a role for EVs released by functional stem cells in modulating senescence and possibly other pathways related to longevity and aging. Stem cell-derived EVs allow for the tight regulation of the duration and dosage of treatment and their use precludes the risks of tumor development and donor cell rejection. Given that human ES or iPS cell can be expanded and differentiated in bioreactors to generate high yields of progenitor cell-derived EVs, the therapeutic potential for adult stem cell EVs in the treatment of age-related pathologies is promising.

Relative to stem cell transplantation, extracellular vesicles can serve as a simpler and cheaper treatment option that is less likely to face immune rejection. Additionally, they can be delivered at much higher doses than when their source is from transplanted cells. These vesicles contain hundreds of proteins and signaling molecules. On one hand, this makes standardizing treatments between batches of extracellular vesicles and understanding the mechanisms behind their therapeutic effects extremely difficult. On the other hand, they are also able to enact more complex, concerted benefits that could not be replicated using a single drug approach.

This study highlights some of the great promise of extracellular vesicles as senotherapeutics. The effectiveness of the extracellular vesicles treatments followed similar trends to cell transplantation treatments from the same cell types, lending credence to the idea that it is the secreted factors rather than the cells themselves which are providing the therapeutic benefits. However, it is difficult to say which of these strategies might provide greater benefits, as they weren’t compared head-to-head in this study, and other studies have shown the transplanted cells themselves to play a more active role.

Another scientific debate in the longevity field surrounds parabiosis experiments, in which benefits in old mice are repeatedly seen when their blood circulation is combined with that of young mice. It is unclear whether these benefits are derived from harmful factors in old blood being diluted or from the delivery of beneficial factors from the blood of young mice. While the most likely answer might be “a little bit of both,” this study provides further evidence that positive, rejuvenating factors may exist in the circulating blood of younger mice. Of course, caution should always be observed while interpreting mouse studies, but this is especially true for this research, which utilized two highly accelerated models of aging.