This might represent a new frontier in spinal therapy. 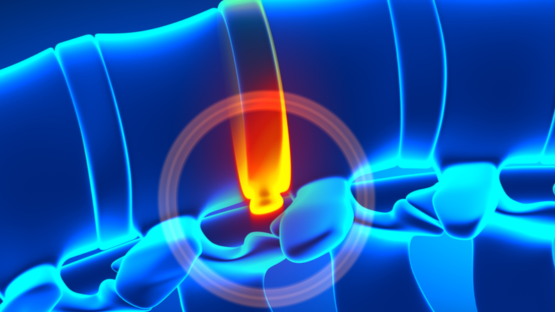 Partial cellular reprogramming using Yamanka factors has become increasingly prominent in the world of aging research. A new study suggests that transient exposure to the Yamanaka factors might be the solution to intervertebral disc degeneration [1].

We have talked previously about Yamanaka factors and how exposure to them can roll back the biological clock in old cells. In a nutshell, Drs. Kazutoshi and Shinya Yamanaka showed that cells could be reprogrammed and made epigenetically younger with four master genes: Oct4, Sox2, Klf4, and c-Myc (OSKM).

During the reprogramming process, the gene expression profile that is typical of aged cells gets switched to a profile seen in younger cells. This means that the Yamanaka factors are essentially able to reverse cellular aging.

Later studies showed that it was also possible to reverse the age of cells in living animals, making them biologically younger. Now, the race is on to make this partial cellular reprogramming technology safe enough to bring to people. Yamanaka factors have the potential to rejuvenate aged tissues and organs and could transform how people age in the future.

Lower back pain is closely associated with intervertebral disc degeneration (IDD). This is a condition in which the discs that separate the vertebrae, the bones of the spine, break down. This degeneration typically causes back or neck pain and can also lead to pain in the hands and legs. The condition is a leading cause of mobility loss globally and poses a significant societal burden.

The researchers in this new study demonstrated the potential of Yamanaka factors as a therapy for intervertebral disc degeneration. They tested short-term cyclic exposure to the Yamanaka factors in a mouse model of IDD. Their results showed that transient exposure over a number of treatments inhibited the progression of IDD by degenerative disc regeneration.

The study also looked at the nucleus pulposus, a jelly-like substance located in the center of the intervertebral disc. This substance distributes hydraulic pressure within each disc under compressive load and facilitates movement. Structurally, it consists of collagen fibrils, nucleus pulposus cells, and a hydrated gel structure called proteoglycan aggrecans that gives the cartilage a load-bearing capability.

Partial cellular reprogramming appeared to prevent age-related characteristics in the aging nucleus pulposus cells. It achieved this by increasing the expression of hexokinase 2 (HK2) which, in turn, activates energy metabolism and promotes the redistribution of the cytoskeleton into a more youthful form.

The cytoskeleton is a structure that helps cells maintain their shape and internal organization. It is also critical for supporting mechanical functions for the cell such as division and movement. The reprogrammed cells showed the characteristics of young cells including cell size reduction and thickening with a decrease in size of the nucleus and nucleoli.

There was also a reduction of various signals typically associated with senescent cells, another reason we age.

Rejuvenation of nucleus pulposus cells (NPCs) in degenerative discs can reverse intervertebral disc degeneration (IDD). Partial reprogramming is used to rejuvenate aging cells and ameliorate progression of aging tissue to avoiding formation of tumors by classical reprogramming. Understanding the effects and potential mechanisms of partial reprogramming in degenerative discs provides insights for development of new therapies for IDD treatment. The findings of the present study show that partial reprogramming through short-term cyclic expression of Oct-3/4, Sox2, Klf4, and c-Myc (OSKM) inhibits progression of IDD, and significantly reduces senescence related phenotypes in aging NPCs. Mechanistically, short-term induction of OSKM in aging NPCs activates energy metabolism as a “energy switch” by upregulating expression of Hexokinase 2 (HK2) ultimately promoting redistribution of cytoskeleton and restoring the aging state in aging NPCs. These findings indicate that partial reprogramming through short-term induction of OSKM has high therapeutic potential in the treatment of IDD.

Taken together, this research shows that transient exposure to the Yamanaka factors is able to induce the rejuvenation of aged cells. This opens the door for the development of therapies that reverse cellular aging to treat conditions such as IDD and potentially many more.

There has been a large amount of enthusiasm for using Yamanaka factors to rejuvenate aging organs and tissues, and considerable funding has arrived to develop it in recent months. For example, Altos Labs recently announced that it is developing rejuvenation therapies using partial cellular reprogramming to the tune of $3 billion in funding.

Given the likely role of epigenetic alterations in aging, partial cellular reprogramming has great potential to combat age-related diseases and even how we actually age. While it is likely to be a decade or two before this technology reaches mainstream medical use, it has the potential to be truly transformative.

You may also enjoy our recent Lifespan News episode, which discusses how one of the leading OSKM researchers believes that we will be able to prevent aging within 20 years.

Combination of Rapamycin and Acarbose Extends Lifespan
0 Comments
In a new study published in Aging Cell, researchers have tested several individual drugs and a combination of rapamycin plus acarbose as […]
Posted in: News
Tags: Acarbose, Interventions Testing Program, Rapamycin

VitaDAO Hosts Fifth IP-NFT Ceremony: Molecule and ApoptoSENS
0 Comments
Three years ago, the concept of a video conference in which participants pass pieces of intellectual property to each other via digital tokens seemed improbable. In 2022, not only is this a reality, it’s the fifth such ceremony to […]
Posted in: News
Tags: NFTs, VitaDAO

Removing Senescent Cells Improves the Brains of Female Mice
0 Comments
Researchers publishing in Nature Communications have detailed how the removal of p16-producing senescent cells leads to improvements in the brains of female mice [1]. Disease-associated microglia and senescence This paper begins with a discussion of disease-associated microglia […]
Posted in: News
Tags: Brain, Cellular Senescence, SASP

Methuselah’s Zoo, a Look at Animal Longevity
0 Comments
To understand human longevity, we need to put it into perspective. Are we relatively long-lived or short-lived creatures? After all, among all the plants and animals in nature, […]
Posted in: News
Tags: Animals, Book, Naked Mole Rats
Stay Connected