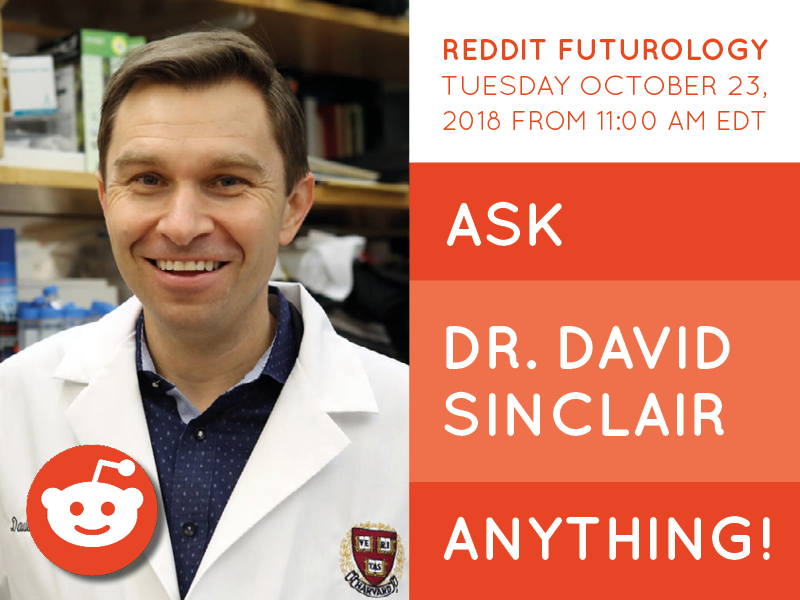 On the 23rd of this month, Dr. David Sinclair did an Ask Me Anything over at the Futurology subreddit in support of the NAD+ Mouse Project on Lifespan.io. There were a range of interesting questions from the community about his work in aging research, particularly the role of NAD+ in aging.

Dr. David A. Sinclair is a Professor in the Department of Genetics at Harvard Medical School and a co-joint Professor in the Department of Physiology and Pharmacology at the University of New South Wales. He is the co-Director of the Paul F. Glenn Laboratories for the Biological Mechanisms of Aging and a Senior Scholar of the Ellison Medical Foundation. He obtained his Ph.D. in Molecular Genetics at the University of New South Wales, Sydney in 1995. He worked as a postdoctoral researcher at M.I.T. with Dr. Leonard Guarente; there, he co-discovered a cause of aging for yeast as well as the role of Sir2 in epigenetic changes driven by genome instability.

More recently, he has been in the spotlight for his work with NAD+ precursors and their role in aging and has been helping to develop therapies that replace NAD+, which is lost with aging, in order to delay the diseases of old age. Below are a selection of questions and answers from the AMA, and we urge you to head over to Reddit Futurology to check out the other questions that people asked.

How soon do you believe that you/science will be able to prove robust rejuvenation to the public? I’ve always imagined it being “5-10 years away”, but due to all the activity in the longevity circles in recent months, I’m getting the feeling that this is coming much sooner than “5-10” years away, and may actually be happening this year or next. What are your thoughts on how soon this is going to happen?

Most drugs take a few years from initiating Phase I trials, depending on the disease they will treat. If it’s rare, it can go faster. There are some molecules including NAD boosters that are in Phase I. If all goes well, I expect the first success to be in the next 3 years and roll out increasingly frequently after that.

Molecules that may slow the effects of aging and even treat some diseases are already in clinical trials – rapalogs, NAD boosters, and senolytics. I remain optimistic that one or more of these approaches, or others, will be successful in the next few years. But drug development is a very hard, slow process, so it’s hard to say for sure. What I can say for sure is that hundreds of people around the world are working very hard to progress this science.

How is progress going with NAD+ therapy?

There are clinical trials ongoing with NAD boosters in humans as we speak. If they are safe, then they move next year into Phase II ‘efficacy studies’, then there’s Phase III. There are other companies working on cool tech also that are at about the same stage of development.

I know it’s frustrating how slow it is. Believe me, I wish it would happen faster too. But please know that I am working as hard as I possibly can to turn breakthroughs in my lab and in others’ labs around the world into medicines that are known to be safe and proven to work.

How soon will this be available to the public? And how much would it be?

Best estimates are 3 years if all goes well, longer if there’s a glitch. And glitches happen, especially on super important projects. Even on Reddit, they happen, as today’s AMA showed.

About the price, I will do all I can to make these drugs available to everyone who needs them. Globally.

I’m aware that global drug prices aren’t a simple matter, which is why I’m trying hard to maintain a say in how things turn out.

Here are the core values of Life Biosciences, which I co-authored:

Everyone is entitled to treatments and therapies that improve their quality of life.

Accessibility to the drugs and treatments we develop is key to progress – regardless of age, race, creed, nationality or economic standing.

Transparency and generosity are the cornerstones of our scientific and social responsibility.

Economic and environmental sustainability must be consistent with any technologies we develop.

I have read that an enzyme on the surface of immune system cells called CD38 does regulate cellular levels of NAD in multiple tissues and cells. Could CD38 inhibitors be a promising area of research to prevent the NAD+ decline? Are you working on such topics?

Yes, we are working on that and a new pathway that depletes NAD. They do seem promising.

Lots of talk about the advantages/disadvantages of the NAD+ precursors Nicotinamide Mononucleotide (NMN) vs. Nicotinamide Riboside (NR/Niagen). Anecdotally, I have seen more people say NMN is better, but that’s not scientific. Do you think one is more effective in humans than another, or are they totally interchangeable?

We are researching that. There are some different effects seen on mouse health and fitness. What’s needed is a head-to-head study. Also, I’m working with very talented people making novel and more potent NAD boosters that we hope will be effective in patients.

What do you think about George Church’s plan to reverse aging through epigenetics and the growing theory that the main forms of aging are epigenetically triggered and have little to do with telomere length? Thank you!

Love George. He’s my close colleague in my Department.

‘We speculate that the RCM response may also cause permanent changes to the chromatin structure.. leading to stable transcriptional changes that accumulate over a lifetime (Oberdoerffer and Sinclair, 2007).’

…and even before that in the 1990s at MIT when studying yeast.

We have made good progress on cellular reprogramming in vivo. Discoveries are coming in rapidly. We have figured out a much safer approach than OSKM, in mice at least. Credit to Yuancheng Lu in our lab, and members of Zhigang He’s lab at Harvard, Benedikt Brommer, Chen Wang and Songlin Zhou. Will release more info when I can.

My understanding is that NAD+ facilitates DNA repair; I read there are different types of damages that can occur and different repair mechanisms. Is NAD+ involved in all of them? If not, which ones is your current project focusing on?

We’ve looked at DNA double strand break repair, which is the worst damage of all for cell survival and possibly aging. That said, the mechanism was in part due to PARP1 activation, and PARP1 facilitates many types of DNA repair (see Li et al., Science, 2017).

We are focused on DNA breaks, because we still think they are a major cause of epigenetic changes that drive aging (see Oberdoerffer and Sinclair, 2007).

Do you think that your ICE mice will be effective models for testing proteostasis diseases (such as Alzheimer’s), senescent cell-related disorders, or lamin-related (i.e. progeric) conditions?

In our ICE mice, in which we ‘induce changes to the epigenome’, we do see evidence of dementia and brain inflammation. We haven’t yet looked in detail for changes in proteostasis. Would be great if we saw it! Imagine doing experiments much faster! I’m also excited about the possibility that the ICE system could make the current models of age-related diseases more human-like by enhancing epigenetic changes beyond what a mouse would normally experience.

We would like to thank Dr. Sinclair for taking the time to do this AMA, and if you are interested in learning more about his current project, check out the NAD+ Mouse Project at Lifespan.io. Dr. Sinclair has recently announced he is matching the next $5000 donated to the project too so it’s the ideal time to support the project.

Top 10 Things to Watch in Longevity for 2021
0 Comments
This week on Lifespan News, Brent Nally discusses the top ten things that are predicted to happen in the longevity this year along with senolytics and gut inflammation, arterial […]
Posted in: Lifespan News, News
Tags: Lifespan News

AI Identifies Senescent Cells and Tests New Drugs
0 Comments
A group of scientists has created a neural network that identifies senescent cells by their morphology and can be used for senolytic drug screening [1]. Image recognition is a […]
Posted in: News
Tags: Artificial intelligence, Cellular Senescence, Machine Learning, Senolytics

Looking Forward to a Productive 2021 in Aging Research
3 Comments
The world of rejuvenation biotechnology is a rapidly changing and ever developing place. As with any disruptive technology, the challenges are significant and include not only the technical aspects of developing these […]
Posted in: News
Tags: AgeX, Apheresis, BIOAGE, FoxBio, Insilico Medicine, Lygenesis, Numeric Biotech, Oisin Biotechnologies, Rubedo Life Sciences, Samumed, Senolytic Therapeutics, Senolytics, UNITY Biotechnology

A Genetic Pathway for Preventing Hearing Loss
0 Comments
Activation of a genetic pathway controlled by the NRF2 gene reduces age-related hearing loss, according to a new study [1]. In the long run, drugs or treatments that target […]
Posted in: News
Tags: Hearing, NRF2, Oxidative Stress