Get your tickets today!

Breanna Deutsch Wants You to Contact Lawmakers About Aging 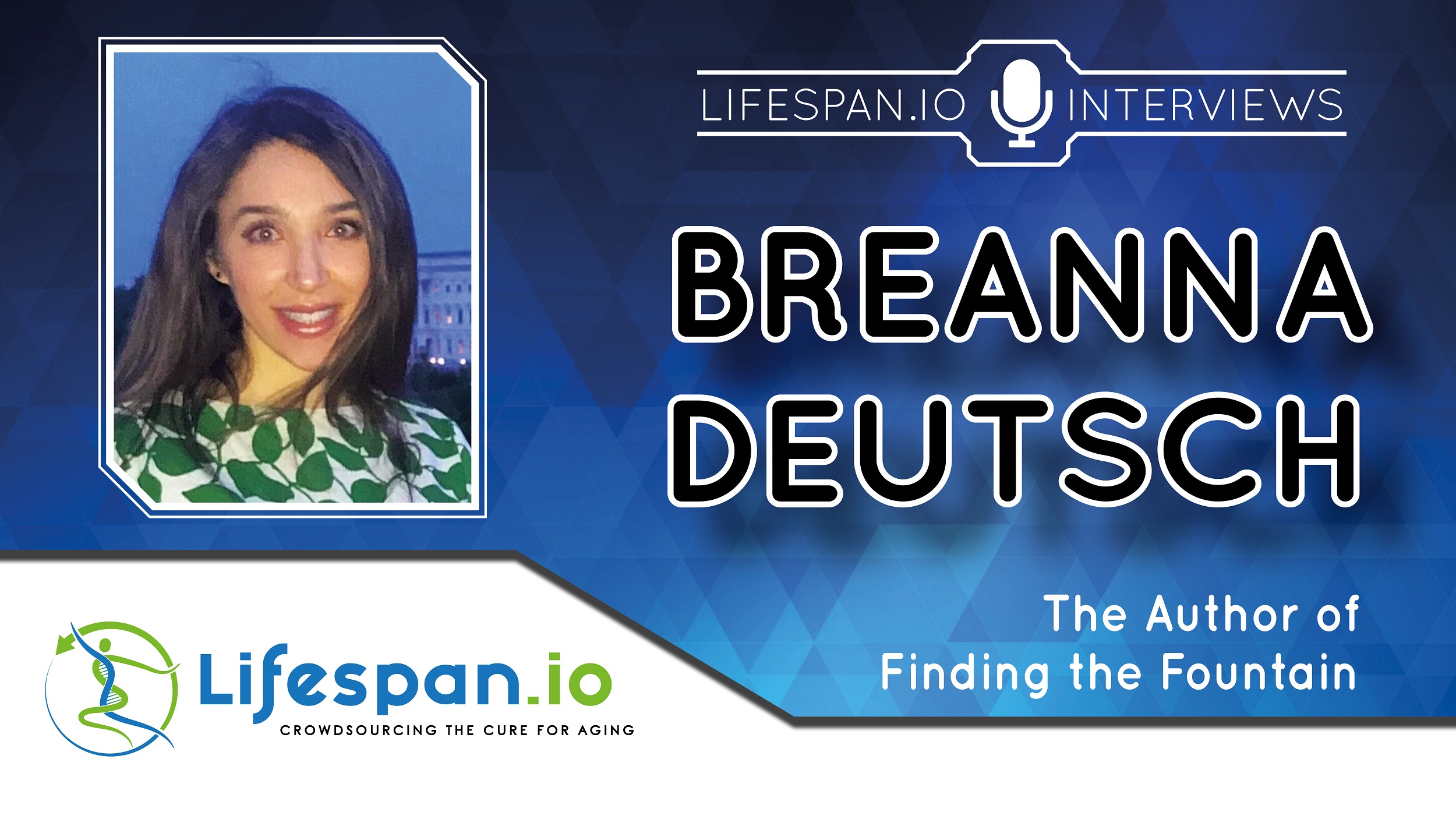 Today, we are interviewing Breanna Deutsch, a policy expert and the author of Finding the Fountain, which we have previously reviewed. Breanna comes from the world of political communications, and she explains what needs to be done to encourage policymakers to pave the way for a world of rejuvenation.

How did you get into the longevity field, and what do you love about it?

I was fortunate to have been raised in a household that understood the connection between healthy lifestyle choices and well-being, so I have long been interested in taking whatever steps I can to optimize my health.

For the most part, this has revolved around maintaining a clean diet and staying physically fit. It was not until I began working in Congress during heated healthcare debates that I went looking for a better medical solution to the chronic conditions that I saw causing the most disruption in our healthcare system. At the time, I recognized that no matter how you sliced and diced insurance policies – which is what congressional healthcare debates typically concentrate on – even the glitziest of insurance plans would not save someone from becoming debilitated by the conditions of old age.

My research led me to a talk that Aubrey de Grey gave at Singularity University. After hearing him speak, I went further down the longevity rabbit hole and soon realized that treating aging itself would result in much better health outcomes and significantly reduced medical costs.

How do you see your book’s audience? Who is it for?

The target audience for this book is the average layperson who wants to be proactive about their health and the health of their loved ones as well as Washington, DC influencers who can play a role in implementing the federal reforms necessary to expedite the development and clinical approval of safe, effective longevity treatments.

I particularly kept my former Capitol Hill colleagues at the forefront of my mind while writing Finding the Fountain. As I argued for the urgent need to increase federal prioritization of longevity research, I outlined how focusing more attention and resources on longevity would help address some of the colossal policy predicaments the US will likely face in the coming decade(s), including a disproportionately large senior population when all Baby Boomers reach retirement age in 2030 as well as the looming insolvency of Medicare and Social Security.

The longevity field has been relatively successful at earning the attention of private sector investors in recent years, but it is lacking acknowledgement from and cooperation with the government. Ultimately, the hope is that this book will help move the needle forward in getting the government on board.

In your book, you discuss how there is debate within the longevity community regarding whether or not aging should be called a disease.     Do you think we should set our differences aside and lobby for aging to be recognized as a disease for practical reasons?

I am sympathetic to the arguments on both sides of this debate, but I am concerned about the longevity community getting bogged down with a game over semantics.

From a public relations perspective, it will be more difficult to earn large-scale public buy-in if we argue for aging to be labeled as a disease. It offends too many people. And for some, as soon as they hear that categorization, they will peg the longevity community as radical and close their minds off to whatever else we have to say.

In my opinion, the more productive approach is to lobby for aging to be recognized as something that is treatable — something we have control over. Ultimately, I think that is the most inclusive, non-controversial messaging and is our greatest selling point.

Apart from aging not being considered a disease – what other political and regulatory roadblocks do we face? How should they be dealt with?

As I detail in Finding the Fountain, researchers are heavily dependent on government grants, and as the longevity community is well aware, the dollars given to researchers looking into the biology of aging are peanuts compared to many other areas of research that are far less critical to the wellbeing of humanity. Appropriators in Congress must be made aware of this fact and specifically designate dollars to aging research, like they have done with Alzheimer’s and other diseases. This way, the National Institutes of Health (NIH) is obligated to direct dollars specifically to research investigating the biology of aging.

Strengthening our investment into worthwhile aging research is incredibly important because there are still many remaining questions surrounding the biology of aging, and getting FDA recognition will not mean much if we do not have effective drugs.

Is there a role for a wider community of longevity enthusiasts?

Yes, there is a large role for the longevity community to play. People often think that members of Congress do not listen to their constituents. I can tell you that this is simply not true. There are a number of things that longevity enthusiasts can do to get involved, including organizing a call-in or letter writing campaign targeting congressional offices. If only a few of a member’s constituents contact their office about an issue, it may not receive much attention.  However, if longevity activists can mobilize enough grassroots support, congressional offices will not be able to ignore their demands. Additionally, since many members are not yet aware of the importance of longevity research, it could be a strategy to get the issue on their radar in the first place.

You probably often get to present our vision to very busy people who are inundated with pitches. How do you make your elevator pitch?

It depends on who I am speaking with, but it is typically something along the lines of:

Treating aging is the most effective way to combat the chronic diseases and ailments of old-age that cause widespread human suffering and bankrupt families and governments.

Unfortunately, there are currently government roadblocks preventing or slowing the development and clinical approval of treatments that have the potential to treat aging itself and alleviate this suffering. We must prioritize aging research and remove federal barriers so that safe, effective treatments can reach the public.

When time and attention span is so limited, it’s important to get straight to the “why does this matter to me” and then go from there.

What counterarguments do you hear most often? What problems do people (especially policymakers) have with the idea of lifespan and healthspan extension?

The most common counterarguments seem to be concerns regarding overpopulation/insufficient resources, the belief that treating aging is going against the natural order of things, and that increasing lifespan will incur additional healthcare costs on the government and on families. The longevity community has answers to all of these concerns.

But focusing on lifespan extension is not an effective approach to win support from policymakers. Using this term will raise red flags, and few are likely to want to associate themselves with the cause. Our messaging should promote longevity drugs as a means to more effectively combat the ailments of old age and increase our number of healthy years while reducing healthcare costs. Living longer is just a side effect.

Money is finally pouring in, but sometimes researchers fail to deliver (like in the case of Unity Biotechnology). I hear opinions that longevity research may already be overhyped at this stage, and more setbacks might discourage investors. Do you agree?

This is why we need to strengthen the allocation of grants to aging researchers. The government does not have the same incentives as investors who are looking to make a quick and large return on their investment. While researchers still must prove to the government that their research has legs, there is more room for trial and error and less pressure to deliver something in a compressed timespan. Investors are also unlikely to invest in an idea that has not been proven in a lab. We need grants so that researchers can experiment and pursue unsolved questions – a freedom that at times results in the discovery of the undiscovered. This is also not to say the grant-giving system could not be improved as well. As we work to find ways to reform the process of grant allocations, the goal should be to create an environment where scientists are empowered to be guided by just the science and are not tugged in one direction or another due to outside political pressures.

Our community views the importance of expanding lifespan and healthspan as self-evident. How long do you think it will take for the penny to drop for everyone else? Can we expect a drastic change in attitude in the nearest future? Is it happening already?

I am not in the business of making predictions, but I do not think we will reach the point where we have a groundswell of support until a significant amount of the public has that “aw huh” moment many of us had when we first heard a talk from or read an article authored by Aubrey de Grey or another longevity leader. The question is, how can we get this information in front of the masses and policy influencers? My hope is that Finding the Fountain will give more people that moment of clarity, when they recognize that aging is treatable and it is the best hope we have to combat the conditions that have caused so much suffering.

What are you busy with now?

I am continuing to promote Finding the Fountain in an effort to get it into the hands of as many people outside of the longevity community as possible. This public awareness campaign is a first step of the larger goal of eventually building the momentum necessary to compel Congress and government bodies to prioritize longevity research and create a clear pathway for safe, effective longevity treatments to reach the public. I am also interested in collaborating on ideas, so please reach out!

Can Quantum Computing Help Discover New Drugs?
2 Comments
With a new announcement from IBM and Germany’s Fraunhofer Institute, the era of quantum computing has finally arrived in Europe. Can its advance speed up the […]
Posted in: News
Tags: Drug Discovery, Quantum Computing

What is Pterostilbene? A Summary of Pterostilbene
1 Comment
There are few things as tasty as a good blueberry, but science is showing that there could be more health benefits to this delicious fruit than […]
Posted in: News, Supplements
Tags: Forever Healthy Foundation, Geroprotectors

LifeXtenShow – Fewer Births or More Deaths?
0 Comments
In the final episode of X10’s overpopulation series, Nicola discusses why it would be enormously unethical to stop the progress of life extension to hope […]
Posted in: LifeXtenShow, News
Tags: LifeXtenShow, Overpopulation

Starting Your Personal Longevity Strategy
1 Comment
Every day, researchers get together in their labs and try to find ways of bringing aging under medical control. Despite the ongoing global effort, it is estimated that a relatively complete system […]
Posted in: Advocacy, News
Tags: Healthspan, Longevity, Supplements
Stay Connected