Some people had their cancer fully suppressed. 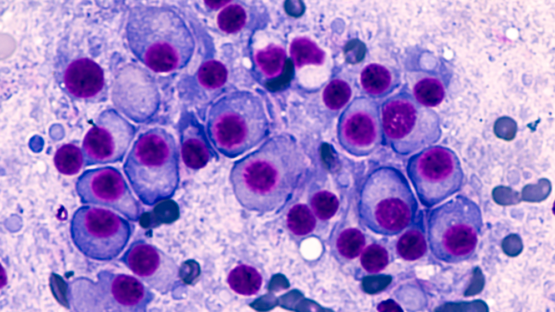 The results of a Phase 1 clinical trial of allogeneic CAR T cell therapy against multiple myeloma have been published today in Nature Medicine, and they appear to be promising.

Multiple myeloma is a cancer of the plasma B cells, which are formed in the blood marrow and are normally responsible for expressing antibodies against pathogens, such as bacteria and viruses. The participants in this study have either a recurrent form of this disease or a form that has not responded to any established treatments.

Cancerous plasma cells express the BCMA protein, which can be used as a target for genetically engineered CAR T cells. However, while engineering the patient’s own cells to target this protein would be ideal and has been shown to work in early clinical trials [1], the researchers hold that it can take too much “vein-to-vein” time; by the time that the full process is complete and the modified cells are ready for injection, the cancer may have significantly, even fatally, progressed.

Therefore, the researchers have developed ALLO-715, pre-existing CAR T cells that can be immediately administered. These allogeneic cells are modified in three main ways: to attack BCMA-producing cells, to knock out the T cell receptor alpha constant that would encourage these T cells to attack unfamiliar cells (such as the patient’s), and to knock out CD52, a differentiation cluster that would normally be a trigger for immunorejection.

In this trial, the researchers also employed ALLO-647, an antibody that removes CD52-expressing cells and causes lymphodepletion. While this is, in essence, attacking the patient’s own immune system (which is already suffering from cancerous B cells), it facilitates the growth and expansion of ALLO-715 cells.

Given the lymphodepletion regimen, it is no surprise that infection was a serious risk. Most patients were shown to have significant depletion of the immune cells known as neutrophils, and diminished numbers of other immune cells were also reported as adverse events. Cytomegalovirus resurgence was a problem, and pneumonia, blood sepsis, and cytokine release syndrome were shown to occur as well. Some neurotoxic proteins were also found in some patients.

While those adverse events are certainly significant, the researchers found that the treatment is still significantly better than the disease. Multiple myeloma is often fatal, particularly for patients with recurring or unresponsive forms of it. Of the 43 patients (average age of 64) that were treated, 24 received at least 320 million cells along with ALLO-647 and two additional lymphodepletion drugs. The researchers found this to be the optimal dosage regimen, as of this subgroup, six people had moderate partial responses, eleven had very good partial responses, and six had complete responses: their cancer had gone into full remission.

While the results are certainly at least somewhat positive, this therapy is still early in the development process; this was a Phase 1 safety and dosage study that was not placebo controlled. There was a wide variety of responses or lack thereof, and there are as of yet few insights into why it works so well for some patients and not at all for others. This was a somewhat dangerous treatment for an even more dangerous disease; over the course of this year-long study, a total of seven people died of cancer progression and three died of infection. It must be noted here that the mortality risk of aging is even higher.

Still, this represents a milestone in the development of allogeneic cellular therapies. It is easy to see ways in which the effort spent in developing safe and reliable T cell therapies might also be relevant to other diseases in which fresh, compatible cells from an off-the-shelf source would be ideal. If the dangers of immunorejection can be overcome and depleting the immune system can be rendered unnecessary, it may be possible to not only fight cancers with this approach but to combat the aging hallmark of stem cell exhaustion.