The telomeres are transmitted through intercellular communication. 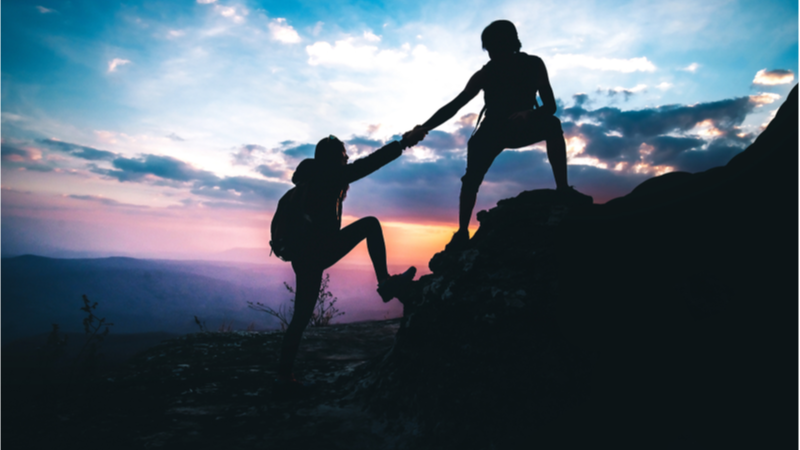 Scientists have found that when T cells are activated by antigen-presenting cells, the activating cells donate chunks of their telomeres to the T cells, preventing senescence [1].

Telomeres are sequences of TTAGGG repeats at the ends of our chromosomes that protect their integrity. Because of the way in which our somatic cells copy DNA, with each cell division, their chromosomes become a tad shorter at the telomeres, which does not affect cellular function. However, when the telomeres are finally exhausted, the cell becomes senescent [2]. Some cells, such as stem and cancer cells, can extend their telomeres via the enzyme telomerase, but in most somatic cells, telomerase activity is turned off.

T cells, which are part of the immune system, are somewhat different: they can upregulate their telomerase activity following bouts of activation-induced proliferation, but this is insufficient to maintain their telomeres’ length. The ensuing replicative senescence contributes heavily to age-related pathologies.

Immune cells are activated by antigen-presenting cells (APCs), which communicate with them via immunological synapses. This synaptic stimulation is what leads to upregulation of telomerase in T cells.

Give me your telomeres!

In this study, the researchers uncovered another amazing mechanism of telomere preservation: they found that APCs can donate chunks of their telomeres, packed into tiny vesicles, to T cells via immunological synapses. T cells that acquire those extra chunks go on to become long-lived memory cells, while other T cells eventually end up being senescent.

In a series of elaborate experiments, the researchers observed telomere fragments clustering at the synapses of the APCs. Such clustering of molecules usually precedes their transfer to immune cells. Shortly afterwards, telomeres in some of the activated T cells were confirmed to grow by up to 3,000 base pairs. For comparison, post-activation telomerase activity can only extend telomeres by 100-200 base pairs. APCs’ telomeres were shortened as the T cells’ telomeres were lengthened.

To confirm that those extra chunks of telomeres were not native to the T cells, the researchers inhibited DNA polymerase activity in them. Without this enzyme, a cell cannot grow its own DNA. However, polymerase-deficient T cells experienced the same telomere growth.

The researchers also labeled APCs’ telomeres and then observed the labeled fragments taking their places at the ends of the T cells’ chromosomes: The researchers were able to link telomere transfer to the T cells’ proliferation activity: T cells cultured and activated in the presence of telomere-containing vesicles expanded (divided) over 30 to 40 days approximately thrice as much as when no vesicles were present or no telomeres were present in the vesicles.

Biochemical markers of cellular senescence (β-galactosidase and sestrin) were greatly diminished when T cells were grown with telomere vesicles. This prevention of senescence led to enhanced generation of stem-like memory T cells.

The researchers also confirmed their findings in vivo. APCs carrying an antigen (ovalbumin) were injected in mice along with labeled T cells specific to this antigen. The researchers found that about half of all T cells had acquired telomeres from the antigen-loaded APCs. T cells that had acquired telomere chunks from APCs proliferated much more efficiently than those that had not.

The researchers suggest that telomere transfer from APCs protects the recipient T cells from replicative senescence and guides them toward long careers as memory T cells. However, failure to acquire telomeres from APCs, which is seen in a large proportion of T cells, shifts them towards a short-lived effector state and future senescence.

It is believed that T cells become senescent after repeated episodes of antigen stimulation, when highly differentiated effectors fail to further activate the telomerase, and proliferative activity ceases. However, our results support an alternative model for senescent T-cell generation whereby only one failed round of telomere transfer during antigen stimulation destines T cells towards senescence in the future.

In conclusion, our data describe fundamental ageing fate decisions of T cells being made immediately, during initial synaptic contacts with APCs, pending telomere transfer. It was suggested previously that as-yet-undefined signals must be responsible for terminal differentiation and senescence of T cells. We now propose telomere transfer to be that signal.

We suggest that senescent T cells, or their progenitors, may be short-lived cells that are continuously generated by episodes of activation that lack telomere transfer.

Immunosenescence is linked to various aspects of aging. This study elucidates a new mechanism of telomere elongation in T cells that prevents their senescence and can potentially be translated into anti-aging therapies. In particular, greatly accelerated senescence prevents immune cells from effectively fighting cancer [3]. It would be interesting to discover if telomere transfer can boost T cells’ anti-cancer potential.