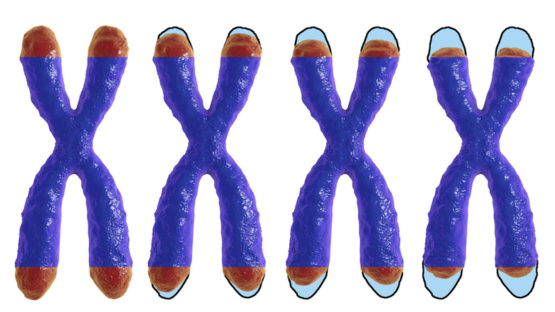 Researchers have demonstrated that it is possible to restore telomerase activity in stem cells affected by telomere biology diseases, which prevent them from producing telomerase and repairing their telomeres.

Each chromosome that stores our genetic information has a protective cap at each end known as a telomere, a specific DNA sequence that is repeated thousands of times. This sequence has two purposes: it protects the coding regions of the chromosome and prevents it from being damaged, and it acts as a clock that controls the number of replications a cell can make; this is known as the Hayflick limit.

With each cell division, this protective cap is worn away, gradually wearing down and shortening the telomere. The telomeres suffer this steady attrition due to the inability of DNA polymerases to fully restore the sequence of DNA.

Once telomeres reach a critically short length, cellular senescence is initiated as a way of preventing DNA double-strand breaks from being repaired, which can result in fused chromosomes.

This is the case for the majority of our regular somatic cells; however, stem cells are a bit different and have a way to maintain replicative capacity by expressing telomerase reverse transcriptase (TERT). When TERT is combined with the non-coding RNA (ncRNA) template telomerase RNA component (TERC), it creates telomerase ribonucleoprotein (RNP), which is able to replenish the protective telomere repeats. This is what allows our stem cells to keep functioning sometimes for decades or even our entire lives.

However, there are multiple telomere biology diseases in which this telomere maintenance is disrupted in the stem cells, leading to syndromes such as dyskeratosis congenita, a genetic form of bone marrow failure resulting in the inability of the marrow to produce sufficient blood cells. It can also lead to conditions such as aplastic anemia, liver cirrhosis, and pulmonary fibrosis.

These findings have the potential to support the development of therapies for treating conditions such as dyskeratosis congenita and pulmonary fibrosis. Also, as telomere attrition and the resulting stem cell exhaustion are hallmarks of aging, this research may also have utility for the treatment of other age-related diseases.