The very fact that multitudes of age-related diseases (ARDs) exist alludes to more than just a coincidence. One of the foremost goals of longevity research is to discover the common causes of various ARDs even in the absence of an obvious connection. A group of researchers has recently published a paper [1] that attempts to do just that with powerful statistical tools and a vast genomic database.

The researchers chose the UK Biobank, which stores genetic and health information on nearly half a million people, as their dataset. They identified age-of-onset profiles for 116 diseases and divided them into four different clusters based on these profiles. 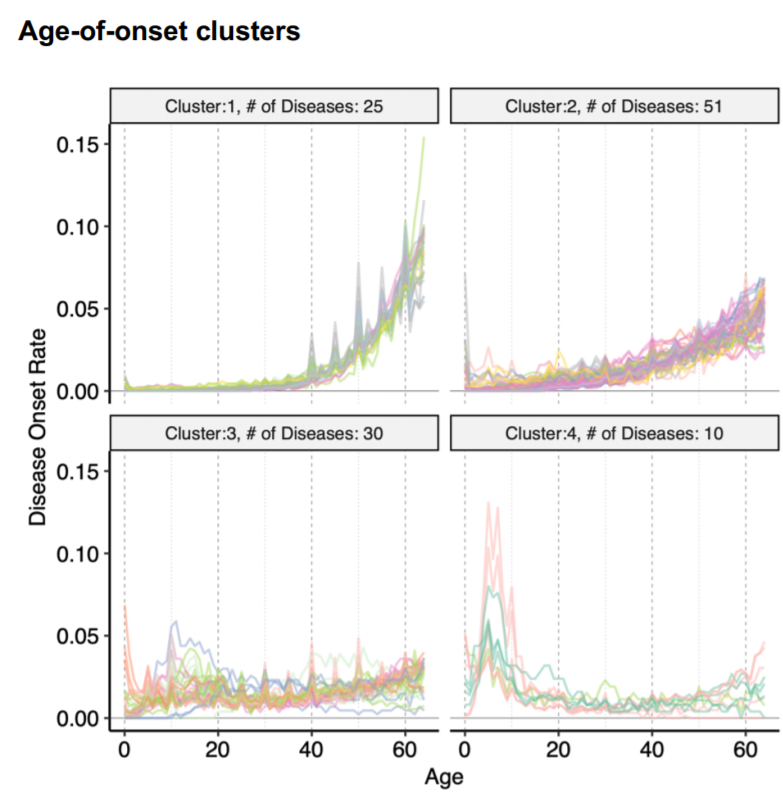 The first cluster (top left) is the most representative of ARDs. Diseases in this cluster begin to appear much more frequently after the age of 40, the incidence rate rising rapidly. Out of 25 diseases assigned to this cluster, 11 were cardiovascular, and the rest included such conditions as diabetes, osteoporosis, and cataracts, so  there were no surprises here. The second cluster (top right) contains 51 diseases with prevalence beginning to rise at the age of 20, but at a slower rate. The diseases in this cluster are the most diverse: 17 of them were musculoskeletal, 13 were gastrointestinal, and there were others, such as anemia, deep venous thrombosis, thyroid problems, and depression. This cluster convincingly illustrates the overall susceptibility to diseases rising with age. The third cluster (bottom left) contains 30 diseases distributed mostly equally across various age cohorts, including immunological, neurological, musculoskeletal, gastrointestinal, and respiratory diseases in roughly equal proportion. Interestingly, all the diseases in this cluster have an immune component. Finally, the fourth cluster (bottom right) consists of a smaller number of diseases that mostly affect children, the largest group being infectious diseases. The authors did not include cancer in their analysis, explaining that the interaction between genetic and environmental factors in cancer probably differs significantly from non-cancerous diseases with a similar age-of-onset profile. Another serious limitation was the age of the individuals, which was capped at 65 in this particular dataset. The scientists left out epigenetic factors as well.

Next, the researchers identified associations between genetic variants and the diseases. Almost 94,000 polymorphic sites (DNA loci that can have multiple variants in the population) showed associations with at least one disease, and 80 diseases had at least one significant association with a polymorphic site. Though 47% of those “significant” variants were connected to more than one disease, just 9% were associated with multiple diseases from different clusters. This suggests that many diseases with similar age-of-onset profiles have common genetic roots. Since the scientists controlled for disease categories, causal relationships between diseases, and co-occurrences, they concluded that the shared genetic associations that they discovered point to a common etiology. The rigorous control for other variables probably resulted in the elimination of some true positives, meaning that the actual correlation should be even stronger. Importantly, genetic associations to the diseases from clusters 1 and 2 had an abnormal proportion of known aging-related genes. This puts the results in line with our previous knowledge.

To prove that their findings can have concrete therapeutic implications, the scientists identified several existing drugs that can target common genetic causes of multiple ARDs. Among the significant hits were 14 drugs already approved for various, mostly age-related conditions, including diabetes, osteoporosis, and cardiovascular diseases. One of the drugs, prunetin, has already been shown to extend the lifespan of drosophila flies [2]. The scientists note that these results can lead to a more targeted approach to ARD treatment, alleviating the all-too-familiar phenomenon of polypharmacy, the use of multiple prescription drugs, in the elder population.

In the opening lines of their paper, the researchers point out that aging is sometimes described as an evolutionary paradox, since it should have been eradicated by natural selection due to its immense adverse effect on an organism. Yet this is a paradox in name only, as at least two evolutionary theories of aging exist [3]. The first one explains aging via mutation accumulation. It postulates that mutations that are only harmful later in life are less susceptible to natural selection: a gene that contains such a mutation would already have been passed on to the next generation by the time it exerts its deleterious effect on the organism. According to the second theory, antagonistic pleiotropy, the same genes that induce diseases in old age might still be selected for reproduction if they are beneficial earlier in life. In short, nature only cares about our health for as long as we can reproduce. The researchers report that they have found evidence in favor of both theories, though results supporting the antagonistic pleiotropy theory were more limited.

In addition to the fascinating results that support the upstream approach to aging, this study constitutes a tour de force of employing big data methods in longevity research. As more genetic and health information accumulates in public databases, we are in for a long-overdue surge in studies like this one that employ statistics and machine learning to great effect. The study is also far from being purely theoretical; its authors have demonstrated that identifying common genetic causes of various age-related diseases can quickly bring tangible benefits in the form of more targeted pharmaceutical interventions.