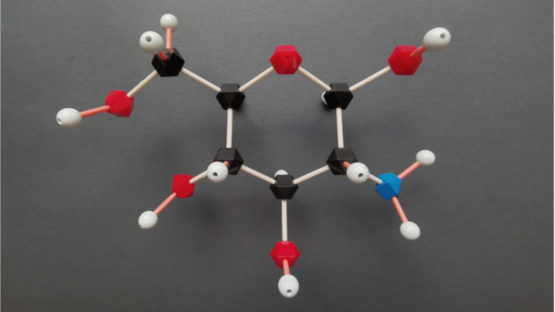 Glucosamine and chondroitin are commonly bundled together as a dietary supplement, and a new study suggests that taking them may significantly reduce mortality. This builds on a previous epidemiological study from earlier this year, which showed that glucosamine supplementation correlates with reduced all-cause mortality.

Glucosamine and chondroitin are both structural components of cartilage, the tissue that cushions the joints. Each of them is produced naturally in the body, but they are also available as dietary supplements.

Glucosamine is a naturally occurring polysaccharide that is found in cartilaginous joint tissues, bones, skin, ligaments, and nails, and it is involved in protein and lipid synthesis. It is contained inside the synovial fluid between the joints, where it helps to reduce friction on joint surfaces. Glucosamine is naturally present in some animal tissues, such as shellfish shells and animal bones, and even some types of fungi.

Chondroitin is a less well-studied molecule than glucosamine but is frequently paired with it, as some research suggests that it has anti-inflammatory properties. Chondroitin occurs naturally in animal tissue, especially in the joints and other connective tissue. However, these sources are much lower than the typical doses provided in chondroitin supplements.

Strangely, given its common usage for joint pain, it’s unclear whether glucosamine helps with osteoarthritis knee pain or in other joints. The results of previous studies also suggest that chondroitin isn’t helpful for pain from osteoarthritis in the knee, hip, or other joints.

No serious side effects have been reported in large, well-conducted studies of people taking glucosamine, chondroitin, or both for up to a 3-year period. However, glucosamine or chondroitin may interact with the blood-thinning drug warfarin, so caution is advised there.

The new study looked at the data from over 16,000 participants who were taking glucosamine and chondroitin, with a particular focus on cardiovascular as well as all-cause mortality [1].

After controlling for age, supplementation with glucosamine and chondroitin was linked to a 65% reduction in cardiovascular mortality and a 39% reduction in all-cause mortality.

The researchers suggest that the most likely reason for this large influence on mortality is via the reduction of inflammation and the cytokines associated with it. In a previous study it was found that the level of C-reactive protein, a commonly used biomarker for systemic inflammation, was reduced by 23% in a test group taking glucosamine and chondroitin intake compared to a placebo group [2]. The same study showed that cytokine activity was also significantly reduced in the test group.

They also point out another study which showed that glucosamine influences the size of low-density lipoprotein and its ability to bind [3]. They suggest that this is possibly a way in which glucosamine may be able to reduce the development of atherosclerosis and reduce cardiovascular mortality.

Background: Limited previous studies in the United Kingdom or a single US state have demonstrated an association between intake of glucosamine/chondroitin and mortality. This study sought to investigate the association between regular consumption of glucosamine/chondroitin and overall and cardiovascular (CVD) mortality in a national sample of US adults.

Combined data from 16,686 participants in National Health and Nutrition Examination Survey 1999 to 2010, merged with the 2015 Public-use Linked Mortality File. Cox proportional hazards models were conducted for both CVD and all-cause mortality.

The results of this and other studies suggest that there is a strong association between glucosamine and chondroitin intake and a resulting decrease in cardiovascular and all-cause mortality.

It seems very likely that the mechanism in play here is a general reduction of systemic inflammation. Therefore, it stands to reason that measures that reduce such inflammation should be generally beneficial to tissue health and regeneration.

The usual caveats apply: if you are considering taking glucosamine and chondroitin, it should be done as part of developing a science-based personal longevity strategy. That said, glucosamine and chondroitin are cheap and readily available, and as long as you are prepared to proceed in a scientific and quantifiable manner, it may be worth considering.