3D cell cultures are more useful than their 2D counterparts. 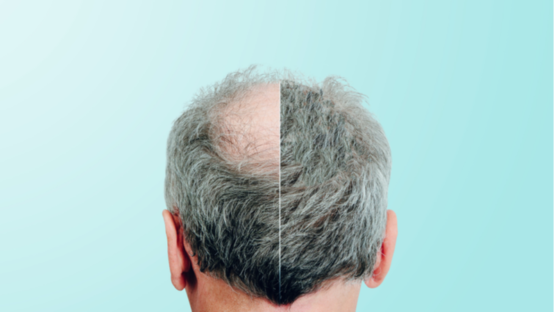 Hair follicles reside in the epidermal and dermal skin layers. At their base is the dermal papilla, where hair growth is controlled by dermal papilla cells (DPCs). DPCs aggregate together both in vitro and in vivo, a behavior that is central to hair growth. However, like most cells of the body, their function declines with age. This contributes to one of the most well-known effects of aging: hair loss.

Cell culture experiments (i.e. in vitro, meaning “in glass”) are exceptionally useful because they are cheap, fast, easily controlled, and don’t require animal or human subjects. Unfortunately, there are also many differences between the way cells behave in cell culture and in vivo (meaning in “within the living”), limiting the applicability of the findings.

Researchers are constantly discovering new techniques to make the cell culture environment more similar to the cell’s niche in the body. DPCs, for example, lose their ability to proliferate and grow hair after several passages when cultured in 2D environments, but they maintain that ability much longer when cultured in 3D cell aggregates [1,2].

In their recent collaboration, Epi Biotech and Yonsei University in South Korea began their investigation by comparing the two cell culture environments [3]. First, they looked at genes whose expression levels were at least 1.5 times higher in 3D-cultured DPCs than in 2D-cultured DPCs. Gene Ontology (GO) analysis revealed that extracellular matrix (ECM) gene expression was heavily influenced by culture environment and collagen-related genes in particular.

They further narrowed this list of genes by cross-referencing it with gene expression levels in healthy, in vivo hair follicles and with genes that decline even further with serial passaging in 2D cell culture. Ultimately, the researchers chose to focus on COL13A1, COL15A1, and COL23A1 in subsequent experiments.

Human DPCs were repeatedly passaged in 2D to induce senescence. This resulted in the typical senescence markers of an enlarged, flattened morphology, SA ß-gal staining, and an increased p16 and p21 expression. 3D cell aggregates created with high-passage cells were much less compact, formed irregular shapes, varied wildly in their diameters, and did not form hair follicles. These results were each in stark contrast to aggregates created from low passage DPCs.

Gene expression of COL13A1, COL15A1, and COL23A1 were also reduced in the senescent spheroids. However, immunofluorescent staining (which looks at the amount of proteins that have accumulated over time rather than the genes actively expressed at a given time point) found no differences in COL23A1, and so it was not investigated further.

These in vitro results were then corroborated in young and old mice in vivo. Aged hair follicles were positive for SA ß-gal and had lower expression levels of COL13A1 and COL15A1, similar to the human cells subjected to repeated passaging.

With the association of COL13A1 and COL15A1 with senescence and cell aggregation identified, the researchers next turned to cause and effect. They reduced COL13A1 and COL15A1 expression levels using small interfering RNA. Reducing either gene resulted in increases in SA ß-gal staining, p16, p21, and dysfunctional cell aggregation, suggesting that both may play a role in the mechanisms behind DPC senescence induction.

The researchers next turned further downstream. Previous research suggested that the TGF-ß family of proteins may be involved in this pathway. Looking at aged mouse hair follicles, TGF-ß2 expression in particular was reduced. Supplementing their 2D-cultured DPCs with TGF-ß2 delayed senescence and increased COL13A1 and COL15A1 levels. TGF-ß2 treatment also maintained the DPCs’ aggregation abilities and their ability to form hair follicles despite a high passage number. Similarly, an in vitro model of TGF-ß2 knockout produced the reverse results in all assessments, further confirming its role.

In this study, we investigated whether collagen expression changes in hDPCs are involved in the senescence and hair inductivity of hDPCs and further examined the underlying molecular mechanism of collagen regulation. This study reported that TGF-ß2 inhibited the cellular senescence and induced spheroid formation of hDPCs by upregulating COL13A1 and COL15A1 expression.

The immediate impact of this study involves the optimal culture of DPCs. By supplementing with TGF-ß2, researchers may be able to better study aggregated DPCs and, therefore, the process of their aging and loss of hair growth abilities.

Whether these findings have any broader effects on longevity will require further investigation. A reduction in collagen expression is already a well-known driver/result of aging in multiple tissues. Increasing TGF-ß2 expression has shown context-dependent results in other tissues – sometimes resulting in accelerated aging and sometimes showing anti-aging properties. It’s possible that a treatment specific to age-related hair loss could spring from this study, but that would require significant development beyond this work.