Working the Deletion Problem out of CRISPR

A new CRISPR technique causes unwanted deletions, but this problem can be dealt with. 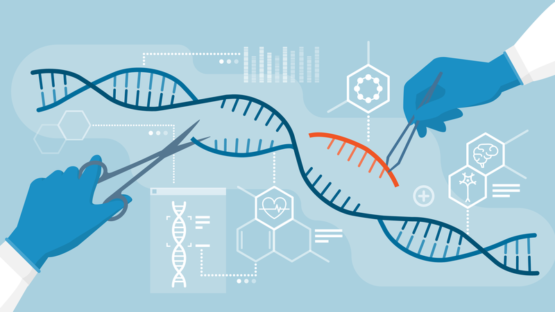 In a study published in Genome Biology, researchers explain how they are working to make CRISPR less prone to large, accidental deletions of genetic material [1].

While this seems counterintuitive, previous technology only allowed for the ready identification of deletions below 100 base pairs. New technology has allowed for larger sequencing [1], and what they found was striking: thousands of bases were being lost, substantial sections of the genome removed. These deletions occur when cells are transfected using Cas9-riboprotein (RNP), a modern delivery system for CRISPR that has fewer off-target effects than the older plasmid approach.

Bringing in the repair with the editing

The researchers wanted to discover whether or not they could bring in repair ability along with the edits, allowing cells to quickly fix the damage dealt by RNPs. To this end, they analyzed multiple different approaches: single-stranded oligodeoxynucleotides (ssODNs) donating homology-directed repair (HDR) sequences to the cleavage site, adeno-associated viruses (AAVs) donating HDR, and double-stranded oligodeoxynocleotides (dsODNs) that are mediated by non-homologous end-joining (NHEJ).

Although each approach has its own strengths and weaknesses, having dramatically different effects at different genetic loci, all three of these approaches showed promise in both T cells and HSPCs. ssODNs, inserting 6 base pairs or 18 base pairs of HDR into the cleavage site, reduced deletion indexes by 40% overall while preventing 60% of large deletions. AAVs, which were larger but inserted the same HDR, performed even better; 80% of large deletions and deletion indexes were prevented with this approach. In cases when HDR is inappropriate, the researchers showed that inserting a 28- to 34-base-pair dsODN through NHEJ reduced large deletions by 60%.

While the analogy is imperfect, all three of these approaches effectively included glue along with the cuts, allowing cells to rebuild DNA strands instead of losing pieces of them.

Papers like this explain why RNP-based CRISPR, despite being more efficient than plasmids, is still not completely safe for use in living humans and why CRISPR-based therapies are only largely used for very serious diseases. In medicine, the cure must not be worse than the condition that is being treated.

We do not yet live in a world in which we can safely edit all the genes of all our cells, especially our non-dividing cells, to remove traits we don’t like while giving us traits we want. In such an ideal world, we could increase our longevity while giving ourselves resistance to diseases, including Alzheimer’s and other diseases of aging, while improving our immune systems to better repel infectious diseases.

However, this research shows that errors introduced by current CRISPR techniques can be mitigated if not eliminated entirely. Hopefully, future approaches will make off-target effects and unwanted deletions things of the past, allowing for the safe delivery of gene therapies that cure crippling genetic diseases and allow everyone to enjoy extended healthspans.