Undoing Aging in the Viewfinder 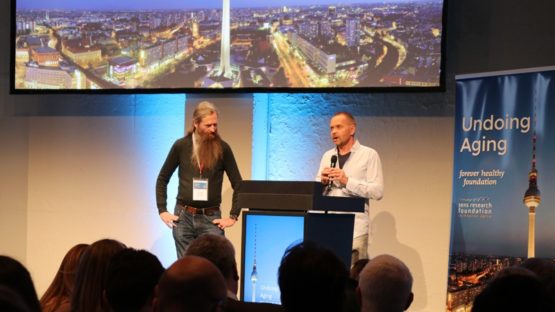 The day after I got back from the Undoing Aging 2019 scientific conference, which was jointly organized by the SENS Research Foundation and Forever Healthy Foundation, Moscow greeted me with the first sunny days of the spring. Still tired and lacking sleep, but happy and inspired, I want to share my impressions of this year’s conference with you.

Actually, I began preparing for this event in the autumn of 2018, when it was first announced. I booked the hotel well in advance, including some spare rooms that could be transferred to our partners later on. B&B Alexanderplatz is located next to the conference venue Umspannwerk Alexanderplatz, literally next door, and it has a nice social space in the lobby, making it very handy for setting appointments with business partners, so we at LEAF decided to make it our headquarters once again. I arrived on March 26th, got some brief rest, and went downstairs to work while also keeping an eye on who was arriving. Not long after I sat down, I saw some very familiar faces, as Maria Entraigues-Abramson and her husband Gary Abramson arrived. As part of the organizers’ team from the SRF, they came to Berlin early to help coordinate the preparation. Next, I saw our own VP Dr. Oliver Medvedik and his super-energetic friend, Jean Lam. Last but not least, I met Anna Dobryukha, the chief of the medical department at Komsomolskaya Pravda; she is one of the most famous Russian journalists writing about aging and longevity.

The next morning, more of my colleagues arrived – our President Keith Comito with his friend Christie Sacco, who is our brilliant task facilitator and video editor; Steve Hill, a fellow board member and our social media manager; his wife Fatima (who actually prefers to say that she is not his wife but he is her husband), who came armed with a camera; and our writer Nicola Bagalà, who was very excited by the fact that he was assigned to interview Dr. Judith Campisi herself. We had a team lunch at the Alexa mall nearby and discussed the general battle plan for the conference. 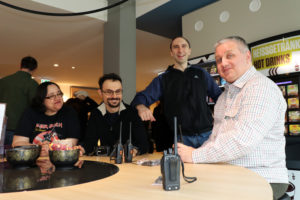 To ease our lives this year, LEAF acquired a set of walkie-talkies, and, on the 27th, the team had some practice with how the system works. The set was fairly nice, as the range allowed us to exchange messages between people at the conference venue and at the hotel. Compared to last year, I must say that the radio made it much better for us, as locating a specific researcher or coming together to create footage only required us to click a button and say a few words, such as “Keith, please identify your location” or “Guys, please help me find Nir Barzilai, I need to invite him to the press room for an interview in 10 minutes.” The response was very fast, something like “Steve here, I see Nir in the lunch area near the posters.” It felt a bit weird, as you normally see these kinds of coordination tricks in James Bond movies, but it turned out to be extremely productive in a space as big and crowded as this year’s conference venue. We will definitely be using this set for all future conferences.

On the evening of March 27th, LEAF organized a dinner for the members of our Longevity Investment Network (LIN) – a project of my colleague Javier Noris, who is running monthly pitch meetings to help young rejuvenation biotechnology companies find partners in the investment field. Many wonderful researchers were present, and I had an opportunity to talk to John Lewis from Oisin Biotechnologies, Reason, the co-founder of Repair Biotechnologies and owner of the research blog Fight Aging!, and Aaron Wolfe, COO of Ichor Therapeutics, among others. It was extremely interesting to talk about the filters and special educational stages that Ichor is using to pick the most promising students and help them begin their careers in rejuvenation biotechnology companies. I hope that Aaron will find a bit of time for LEAF to interview him later on, as it could help aspiring young scientists better understand the requirements of the industry.

On March 28th, first thing in the morning, I ran to the venue to get our lanyards in advance in order to avoid the crowd and not miss any important appointments with our interviewees.

This year, the B&B Alexanderplatz‘s hotel manager, Roy Sarucco, has been very generous, and, after a request from the venue, he has dedicated the breakfast area of the hotel to press needs. This nice gesture literally saved us (we have had around 20 interviews planned!) as well as all other press, including local TV channels, reporters from other countries, and longevity activists producing footage for their documentaries on aging and longevity research. From midday and until the late evening, on each day of the conference, the press room was packed with people talking about the science of living longer, healthier lives – a smaller version of Undoing Aging in plain language adapted for the general public. Unfortunately, I cannot write much about the scientific content – alas, my roles as the press coordinator (I was making sure that Anna Dobryukha as well as the other reporter we’d invited, Sangeeta Singh-Kurtz from Quartz, successfully met all the researchers, longevity advocates, and biohackers who were meant to talk to them) and an extra photographer didn’t allow me to enjoy science as much as I would want to. I still managed to catch some insights of the brightest minds in longevity when I was present at the interviews, and I could sit and listen.

Technically, I fully attended the welcome talks by Dr. Aubrey de Grey and Michael Greve, the talk by Dr. Nir Barzilai, and the last session on day 3 dedicated to regulatory issues, featuring Sebastian C. Sethe, Dr. Richard Barker, and Dr. Daria Khaltourina. Sadly, during the talk by Daniil Polykovskiy from Insilico Medicine, I was at the B&B creating footage for the forthcoming MitoSENS 2 campaign with Nicola, Dr. Amutha Boominathan, and her colleague, Bhavna Dixit. 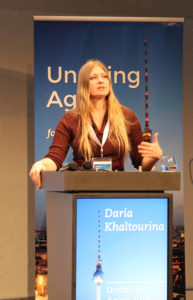 That is fine, as I will watch the talks later, when the organizers of the conference release the video recordings. Most importantly, our battle plan was fulfilled by 150%: the dinner went great, and we got all the planned interviews with the researchers and longevity activists, a lot of nice photos (~4000!), and, on top of that, lots of footage for our new edutainment project.

Somewhere in between the planned activities, Nicola and I managed to participate in a survey from XPrize, which was organized by Sam Blake from its Impact and Design department. It was very exciting to share our views on the bottlenecks in the longevity industry with a foundation that is willing to support positive changes in the world. I also was lucky to briefly speak to Jim Mellon, the famous British philanthropist, investor and founder of Juvenescence Ltd., about our conference in NYC. I met Angela Tyrell, the organizer of the next Longevity Leaders conference in London, and we will be catching up later to see how we could collaborate. I spoke for a moment with Stefan Hascoet, who represents Deep Knowledge Ventures, an umbrella company of Dmitry Kaminskiy that is focused on developing various technologies related to rejuvenation and precision medicine. I also met James Strole and Bernadeane in person; they are the main figures behind RAADFest and probably the most long-term proponents of life extension in the community, with over 40 years of such experience! These are only a few names that come to mind, but there were many more wonderful people on site.

I should make a special note about the food. It is always a struggle to find longevity-promoting food at conferences, but, this time, the organizers did a great job: most of it was healthy, even the food at the farewell party, which actually had one more component of the healthy lifestyle, namely dancing!

Now, my colleagues and I are processing all the materials that we have, and we intend to release the articles as soon as possible; we are currently preparing a photo gallery from the conference for our community to enjoy. I am focused on a follow-up with the great people whom I spoke to at Undoing Aging.

Inspired by this amazing effort of the SENS Research Foundation and Forever Healthy Foundation, I return to the preparation of our own conference. Ending Age-Related Diseases: Investment Prospects and Advances in Research takes place on July 11-12, 2019 at Cooper Union in New York City. There are only 4 months left before the conference, and everyone on the team is working hard on making our own contributions to the development of rejuvenation therapies. I hope to see you there; stay tuned!