Grey Hair Can Change Back to Original Color

Stress seems to be the key factor. 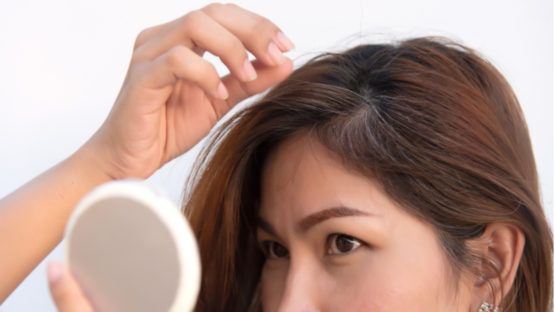 Many people dread finding their first greying hairs, which is often their first sign that aging is creeping up on them and that the fire of youth is starting to die down and smolder. To some readers, greying hair may seem to be a superficial issue; after all, it isn’t life threatening.

However, in our modern world, which is often image and beauty fixated, it can be a real concern for some people. For men, though probably more so for women, greying hair is often seen as a sign of fading beauty and of being “over the hill”.

This is, of course, absolute nonsense and in no way reflects a person’s value, but this is unfortunately one of the more negative aspects of society. Therefore, today’s news may be of some comfort to people feeling this kind of social pressure.

Greying hair is not necessarily a one-way street, according to a recent study

Good news: researchers have recently released a preprint that suggests that sometimes greying hair can revert back to its original color.

Over the decades, there have been various reports suggesting that grey hair can and does sometimes return to its original coloration. However, how and why this happens is poorly understood.

This new study, published in the journal eLife, provides evidence that greying occurs in the hair of people of varying ages, sexes, and ethnic origins. This greying and color reversal phenomenon is also strongly linked to stress and mental well-being.

And the good news is that this phenomenon is also probably more reversible than has been previously thought.

The hair on our heads reflects cellular aging

Greying or whitening of our hair is not something that happens all at once; there is clearly a steady progression. Hair greying typically happens in seemingly random areas of the scalp and in the beards of men.

Just as the many cells in our body do not all age at the same rates, with some showing signs of aging sooner than others, the same applies to our hair. In many ways, what is happening with our hair is a mirror of cellular aging in our entire bodies. The fact that some hairs turn grey sooner might be explained by some hair follicles being poorer at resisting stress than others.

Lead study author Martin Picard had also seen cases in which hairs were both grey and their original color. He believed that by finding a hair at this crossover point and working out how quickly it was growing, it would be possible to identify exactly when that hair began to age.

From that reference point, he reasoned that it might also be possible to work out what event in a person’s life had caused it to happen.

Picard and his team then searched for people with these transitioning hairs and managed to find 14 people who had them. They were a mix of men and women aged between 9 and 65 years of age with varied ethnicity. The researchers took samples of both bi-colored and single-colored hairs from them. Samples were from scalp, face, and pubic areas.

The phenomenon of hair color reversion

In order to properly analyse the samples, the research team created a technique in which they digitized and measured subtle changes in color of the hair samples. They called these strand variations hair pigmentation patterns (HPP).

Analysis of the HPP turned out to be a real surprise for the researchers. Of the 14 participants, 10 of them had greying hairs that had actually regained their original color. This phenomenon was not restricted just to the hair on the scalp but was also observed in pubic hair.

Is there a link between greying hair and stress?

The team went on to investigate if there was a link between hair greying and psychological stress. It is a common idea that stress leads to grey hair; indeed, previous research has hinted that there is an association, and most readers will likely have heard anecdotes suggesting this.

Taking a subset of the 14 participants, the researchers examined the HPP of their hairs and identified where a color change had happened. Using an average growth rate for hair (~1 cm a month), they were able to work out how long ago in time these changes happened in each person. They then compared these points in time with a record of stressful events reported by the participants.

Their investigation showed that changes in pigment to grey occurred during times of significant stress. On the other hand, in cases where the color changed from grey back to the original color, there was typically a period of relaxation.

An example of this was a 35-year-old male participant who had five hairs undergo this phenomenon of color reversion. The change from grey back to its original color coincided with a two-week vacation that the man had been on.

Due to the small study group, the researchers’ next steps will be to investigate the link between greying hair and stress more closely. The team is already planning a larger scale study that will measure hair color changes and stress levels while tracking participants more directly.

Hair greying is a hallmark of aging generally believed to be irreversible and linked to psychological stress.

Using this method, we show white/grey hairs that naturally regain pigmentation across sex, ethnicities, ages, and body regions, thereby quantitatively defining the reversibility of greying in humans. Molecularly, grey hairs upregulate proteins related to energy metabolism, mitochondria, and antioxidant defenses. Combining HPP profiling and proteomics on single hairs, we also report hair greying and reversal that can occur in parallel with psychological stressors. To generalize these observations, we develop a computational simulation, which suggests a threshold-based mechanism for the temporary reversibility of greying.

Hold fire on the conclusions for now

The small scale of this study means that no firm conclusions on hair color changes and stress/relaxation can yet be made, but it does offer a tantalizing hint. As always, a larger study group and further research will be required before the connection can be 100% confirmed.

That being said, we will go out on a limb here and suggest that less stress, especially chronic stress, is probably beneficial for your hair and the rest of your body, for that matter.

It could turn out that HPP may prove to be a useful biomarker of stress and aging and help ascertain the effects of earlier life events on aging. In a real sense, your hair appears to be keeping a record of how you are aging and your stress levels. This information is something that researchers and healthcare professionals may find useful.

These results also suggest that there is likely a sweet spot where hair can return to its original coloration but beyond that, there may be a point of no return where hair will not change itself. Hopefully, this is not the case, but more research will be needed.

Thankfully, other research suggests that grey hair might be reverted via other interventions that target the aging processes directly, such as senolytics. For those of us, including yours truly, who want to regain our original hair color without the help of L’Oreal, there may still be hope.