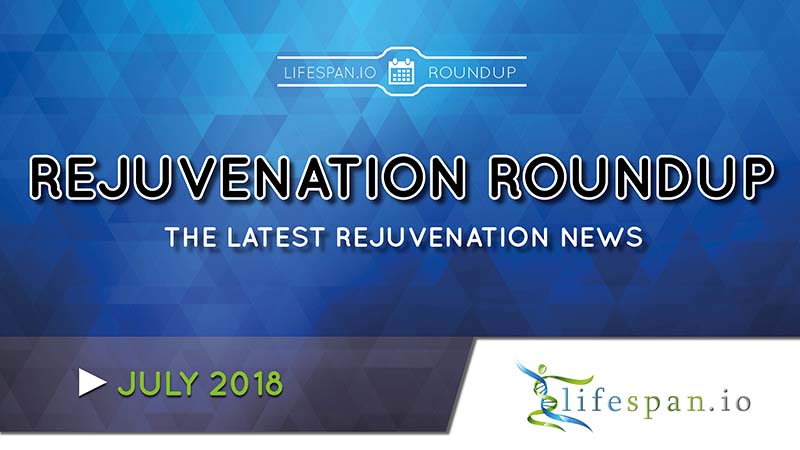 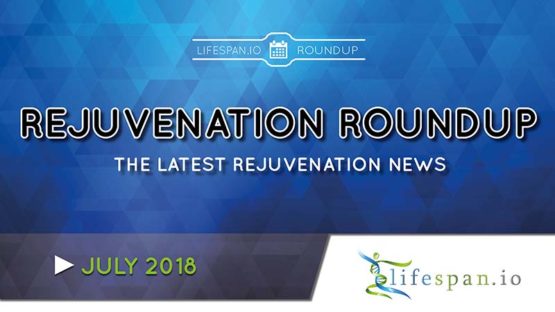 Another month, another series of great news items for healthy life extension enthusiasts! It’s hard to believe that July is already behind us and, with it, the first Lifespan.io conference in New York City; let’s take a look back and review the past month before diving into the next one.

Starting this month, the Rejuvenation Roundup is available as a podcast! For this great initiative, we owe our thanks to Ryan O’Shea, the man behind Future Grind—a podcast discussing all things future. Our Vice President Oliver Medvedik has already had the honor to be featured in a previous podcast about life extension, but all the topics that Ryan deals with are absolutely exciting, so we highly recommend checking out the other episodes as well!

You can find the Rejuvenation Roundup Podcast episodes here on our podcast homepage, and the July edition of the show is available below.

We’re extremely proud of how our NYC conference turned out: a smashing success! With a hundred and sixty attendees, great talks, and praising feedback from our awesome speakers, we couldn’t be more happy. Here, you can read a summary accompanied by several pictures shot during the event and the first video from the conference, LEAF President Keith Comito’s opening speech.

More videos will be released relatively soon; our Lifespan Heroes, without whose support this event would simply not have been possible, will have early access to the videos as a small token of our appreciation. Thanks to everyone who has helped making this event possible, and rest assured that there will be a second edition of the conference in 2019!

Alzheimer’s disease is enigmatic in that not all patients exhibiting an accumulation of amyloid-beta proteins in their brains show symptoms of degeneration. Indeed, the amyloid cascade hypothesis, according to which the accumulation of misfolded amyloid-beta proteins in the brain triggers Alzheimer’s disease, is being reconsidered by some scientists. As reported by Methuselah Foundation, several trials of anti-amyloid-beta antibodies have recently failed in Phase II or III, and as a consequence, they’ve been abandoned by their respective companies. Depressingly, in January 2018, Pfizer abandoned its entire neuroscience pipeline.

Other factors appear to be at play, such as inadequate flow of cerebrospinal fluid and even viral infections, particularly sufficiently common and relatively harmless ones, such as HSV-1 and cytomegalovirus. Given that generation of amyloids is part of our innate immunity, as explained on FA!, the presence of chronic infections of this kind may speed up amyloid production in the brain, exacerbating the clinical picture.

On its recently revamped website, Methuselah Foundation shared the touching, fictional story of Mr. Howie, a 90-year-old man living in a nursing home. The story, based on the real-life work experiences of a geriatric nurse, describes in heart-wrenching detail the challenges and pain that Mr. Howie, just one of many other patients like him, has to go through to take care of his most basic needs. The old man lives every day knowing that it might well be the last time he’ll see his beloved wife, on whom aging has already taken an even bigger toll.

Mr. Howie’s story is a great wake-up call for everyone who thinks that aging isn’t their problem or that it isn’t a problem at all. Mr. Howie may be just fictional, but his fictional story is everyday life for most real 90-year-old people, and unless we step up against aging, one day, his story will be ours too.

In July, we had another batch of great interviews, starting with Dr. Peter de Keizer, whose research on cellular senescence is behind the clearance approach used by Cleara Biotech, a company co-founded by de Keizer himself and yet another great addition to the flourishing longevity ecosystem.

In July, Elena gave a talk about life extension at the Singularity University Meetup; a video of her talk will hopefully be available soon.

Have you ever tried to imagine what the world might look like on the birthday of the first 200-year-old person? Sanlam Life Insurance did and shared its vision through an ongoing series of podcasts titled The 200 Year Old. The series, set in 2218, long after aging has been defeated, tells the story of Lesedi Ndaba, who is about to become the first 200-year-old.

The premise is intriguing, and the story is not blatantly overly optimistic, presenting both the opportunities and challenges that might arise along the way in a similar situation. Featuring present-day experts, such as Dr. Aubrey de Grey, the podcast is an excellent occasion for reflection on the ageless future that might lie ahead, with pros and cons; may this reflection help us make this future the best it can be.

As you might remember, Reason, the owner of the blog Fight Aging!, has launched his own rejuvenation biotechnology company earlier this year; the company, Repair Biotechnologies, is presently looking for a senior research scientist for a position as Project Lead. If you are interested, or you know someone who might be, we definitely recommend giving this a look.

The Biogerontology Research Foundation, in collaboration with the International Longevity Alliance, has submitted a proposal to WHO to include aging as a disease in the International Classification of Diseases (ICD). Although aging per se is not yet classified as a disease, this proposal led WHO to include the new “aging-related” extension code in the ICD-11. Even though the classification of aging as a disease might be unnecessary to make rejuvenation therapies happen, the introduction of this new extension code shows that WHO is receptive to the idea of aging as a dangerous but treatable condition; the time really appears to be ripe for a major paradigm shift.

These days, people don’t have to be just spectators; they can be media creators themselves. You can do your part and spread awareness about aging and rejuvenation biotechnologies by participating in the Longevity Film Competition, an initiative by SENS Research Foundation, the Healthy Life Extension Society, and the International Longevity Alliance that rewards the best life extension video with 10,000 dollars. For this year’s edition, the topic is four misconceptions surrounding life extension. Are you up to the challenge?

Keeping telomeres in the loop

Forget the shoelace aglet analogy you’ve heard a billion times about telomeres; they’re nothing like that. All the way back in 2002, Dr. Tony Cesare had hypothesized that telomeres might loop around chromosomes in order to protect them, but this was impossible to verify because of technological limitations of the time. However, recently, as Steve Hill discusses here, advancements in microscopy have allowed us to confirm Dr. Cesare’s hypothesis.

Old people don’t die more often than young people because they’re chronologically old; rather, because of their health, older people have a higher probability of death than youngsters. If aging were taken completely out of the equation, how long we could live would depend on our probability of death from other causes. However, whether you live to 80 or to 1000 doesn’t change the fact that life extension is just as much about saving and improving lives as any other medical endeavor, and, as such, it is as much of an important matter as any other global issue. Making excuses for age-related death, or trying to hide this problem behind comforting thoughts, isn’t going to help and is not acceptable.

The Earth’s carrying capacity is not set in stone

By the time you’ve said “life extension”, somebody has already asked, “what about overpopulation?” This is, of course, a real phenomenon that we need to keep in mind, but defeating aging doesn’t necessarily mean that we’ll be swimming in people any time soon, if ever. It also doesn’t necessarily mean that we will have too many people for the resources available, because as noted in this Aeon article, the Earth’s carrying capacity is everything but fixed. If you feel like taking a deep dive into the topic of overpopulation, we’ve got you covered here, here, here, and here.

There’s no denying that senescent cell elimination is one of the hottest topics in regenerative medicine right now—if not the hottest. Companies developing their own senolytic approaches are popping up everywhere; as Reason points out here, most of these are small-molecule compounds, whereas Oisin Biotechnologies‘ approach focuses on suicide genes. At the recent International Cell Senescence Association conference, held early in July this year in Montreal, Oisin presented very good preliminary data on mouse survival six months into an ongoing senolytic trial.

Naturally, as senolytics attract more and more interest, more and more funds are being poured into them. Juvenescence Limited, which recently raised quite a pretty penny for life extension projects, has just closed a $10 million deal with the anti-aging drug discovery company Antoxerene.

There’s plenty of reasons to be enthusiastic about this, as more evidence that addressing cellular senescence through cell ablation is beneficial keeps piling up; meanwhile, other research avenues that might become more long-term solutions—such as manipulating the immune system—are being investigated as well.

In July’s edition, we have discussed a potential problem with the popular gene editing tool CRISPR-Cas9; a recent study took a look at significant, unwanted mutations happening at the targeted sites and their possible consequences. You can watch Dr. Oliver Medvedik, Steve Hill, and guests talking about this paper here in the July edition of Journal Club.

We are happy to announce that our friends at UC Berkeley will host an Aging Research and Technology Innovation Summit on August 17 in Stanley Hall. Dr. Cynthia Kenyon, Dr. Judith Campisi, Dr. Irina Conboy, Dr. Mike West, Dr. Steve Garan, and many other experts will be speaking at this event. If you would like to join, you may book your ticket here.

Each month seems to become more and more busy and packed with events and news about upcoming rejuvenation biotechnologies and the people working to make them a reality; this is only a good thing, a marker, if you will, that things are really picking up. We look forward to August with excitement!