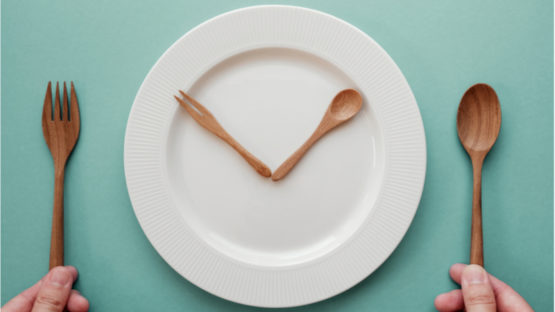 Intermittent fasting is a common topic in the longevity community, and a new study suggests that there could be some benefits from adopting this lifestyle.

A new study published in the Journal of Proteomics builds on previous studies and suggests that intermittent fasting has a host of benefits in humans, not just mice. This study offers evidence that intermittent fasting between dawn and sunset for over 14 hours daily for 30 days improves multiple critical health biomarkers, including circadian clock rhythm and cognition.

The blood biomarker data also suggests that fasting this way is protective against many well-known age-related conditions, such as cancer and obesity, along with Alzheimer’s disease.

During the study, the participants ate a predawn breakfast, fasted throughout the day, and had dinner at sunset for a period of 30 consecutive days. The fasting regimen was conducted without eating or drinking between these two meals, so no snacks or drinks were allowed. Participants were allowed to follow their usual diet during non-fasting hours.

The subjects of the study were included based on the following criteria:

Subjects were excluded if they had any of the following:

It is noteworthy that fasting in this manner did not include caloric restriction, another popular approach to longevity; it simply meant the participants changed their eating times. It appears based on other studies that fasting and caloric restriction work via different pathways and, as the participants did not reduce their caloric intake, it can be ruled out of influencing the data.

Murine studies showed that disruption of circadian clock rhythmicity could lead to cancer and metabolic syndrome. Time-restricted feeding can reset the disrupted clock rhythm, protect against cancer and metabolic syndrome. Based on these observations, we hypothesized that intermittent fasting for several consecutive days without calorie restriction in humans would induce an anticarcinogenic proteome and the key regulatory proteins of glucose and lipid metabolism. Fourteen healthy subjects fasted from dawn to sunset for over 14 h daily. Fasting duration was 30 consecutive days. Serum samples were collected before 30-day intermittent fasting, at the end of 4th week during 30-day intermittent fasting, and one week after 30-day intermittent fasting. An untargeted serum proteomic profiling was performed using ultra high-performance liquid chromatography/tandem mass spectrometry. Our results showed that 30-day intermittent fasting was associated with an anticancer serum proteomic signature, upregulated key regulatory proteins of glucose and lipid metabolism, circadian clock, DNA repair, cytoskeleton remodeling, immune system, and cognitive function, and resulted in a serum proteome protective against cancer, metabolic syndrome, inflammation, Alzheimer’s disease, and several neuropsychiatric disorders. These findings suggest that fasting from dawn to sunset for 30 consecutive days can be preventive and adjunct therapy in cancer, metabolic syndrome, and several cognitive and neuropsychiatric diseases.

These results certainly offer food for thought; however, there were only 14 participants with strict participation requirements, so we should take the findings with a pinch of salt, as the criteria for inclusion cannot be considered representative of the general population. While the data makes for intriguing reading, a larger-scale study that includes a wider array of people with diverse health and lifestyles would be the ideal follow-up to this initial study.

That said, given that the price point of trying an intermittent fasting regimen such as this is effectively zero, some people might consider trying it themselves and monitoring changes to their biomarkers.