Reasons other than physical activity seem to be the cause. 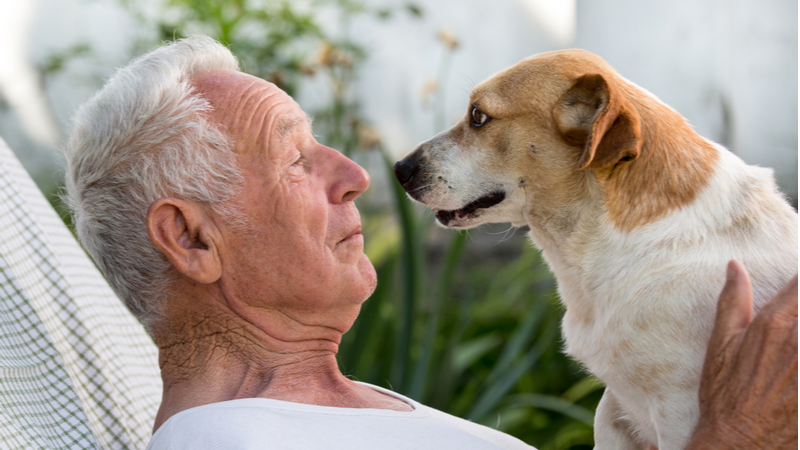 In a new population study, scientists show that dog ownership is associated with a lower risk of developing disability in old age, though it does not affect all-cause mortality [1].

What can be more stereotypical than an old lady with a cat or an old gentleman with a dog? In a new study, scientists collected data from more than 11,000 elderly (65+) Japanese to try and understand how owning a dog or a cat affects a person’s risk of disability and overall mortality.

All participants were physically and cognitively independent at baseline. A questionnaire was issued to ascertain overall health, physical activity, income, household size, marital status, alcohol and tobacco consumption, eating habits, and many other variables. The follow-up period was 3.5 years on average. Participants were also asked whether they have ever owned a dog or a cat or currently own one.

Of the 11,000 participants, fewer than 14% of them (1545 people) were current dog or cat owners, with dog ownership being a bit more widespread (8.6% vs 6.3% for cat owners). Japanese dog or cat owners are disproportionally female, married or living with a partner, have higher than average education and income, are slightly healthier and more physically and socially active, and, interestingly, are also more likely to be drinkers and smokers.

Dogs have the upper paw

After adjusting for sociodemographic variables and health, the researchers saw that current, but not past, dog ownership cut the risk of developing a disability during the follow-up period almost in half. In a blow to cat lovers, cat ownership showed no such correlation.

While physical activity is obviously increased by dog ownership, this variable was controlled for. It did not explain the correlation between dog ownership and disability risk, but it was shown to enhance the effect: people who were both current dog owners and physically active were the ones most protected from the onset of disability.

If dog ownership lowers the risk of disability via other means than physical activity, it begs the question as to why cat ownership doesn’t seem to work that way. The study is also silent about people who own both dogs and cats.

Population studies at their best and worst

The strengths and weaknesses of population studies are on display here. On one hand, such studies allow us to analyze factors that cannot be rigorously tested in a clinical setting. On the other, they are rarely enough to establish causal relationships, and there’s always a chance that variables not accounted for will skew the results. Hence, population studies can be all over the place. For instance, several previous studies did find a negative correlation between dog ownership and all-cause mortality [2], but another comprehensive study did not [3], and neither did this study.

Even when carefully controlling for variables, researchers can get some relationships wrong. For example, older people who decide to get dogs might be slightly healthier and more active. This might not be enough to be reflected in the questionnaire but could be enough to influence their chances to develop disability in the years to come.

As the authors themselves note, a lot of additional research is needed to fully elucidate this pressing question: does owning pets make us age slower and stay healthy for longer? Despite all the ambiguities and limitations, the study seems to support the conventional wisdom: when you own a dog, you exercise more, enjoy more social contact, such as with fellow dog owners, and benefit from the love and affection that these animals are renowned for.

Population studies are an important, if blunt, instrument for finding factors that affect aging, and this particular study is refreshing and informative, despite the usual caveats. In the absence of approved rejuvenating medical treatments, we only have lifestyle changes to potentially slow. Exercise and healthy diet, obviously, receive most of the attention, but dog ownership, for people who are able to take proper care of their animals, also appears to be a good idea.