A New Biomaterial for Thymic Cells

A protein found in the natural thymus is ideal for growing thymic epithelial cells. 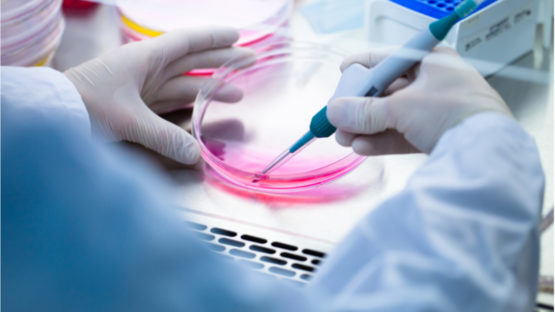 Tissue engineering and regenerative medicine attempts to regenerate tissues both in the lab and in vivo. While the fact that everyone experiences thymic involution should make it a prime target for regenerative medicine, very little research has been done in this area. As such, while the ideal biomaterials to culture various cells have been well investigated, much is still unknown about the behaviors of thymic cells. Thymic epithelial cells are one of the more populous cell types in the thymus and support the maturation of T cells. When isolated from the thymus and cultured in 2D, they exhibit several non-phenotypic behaviors. This limits the ability of researchers to use them to study the biology of the thymus or to regenerate thymic tissue.

Electrospinning is a manufacturing technique used for biomaterials in which the material is forced out of a very small nozzle by an electrical gradient. It is capable of forming highly porous structures made up of extremely small fibers. These 3D structures have been shown to be conducive to cell growth and mobility and the diffusion of nutrients throughout. A recent publication from a lab at the University of Minho in Portugal modified this technique and investigated its effects on cultured thymic epithelial cells. [1]

While electrospun fibers are architecturally highly beneficial for most cell types, they are often limited by their biological properties. Not all materials can be processed by electrospinning. One of the most common electrospinning materials, polycaprolactone, is not very biologically active. In this study, the researchers hypothesized that they could improve this material by functionalizing it with fibronectin, a key protein of the extracellular matrix in the thymus.

A step towards thymus regeneration

After electrospinning the polycaprolactone, they plasma treated their scaffolds and added amine groups by chemical treatment with hexamethylenediamine. They then chemically bound fibronectin to these newly formed amine groups. Each step of this process was optimized by the researchers, including treatment times and chemical concentrations, discovering the best manufacturing methods to create structures for thymic epithelial cell culture.

They then characterized the cultured cells via their metabolic activity, proliferation, and total protein deposition, with all three increasing for the seven days of the study. Cell attachments to the scaffold also increased throughout the study period. The cells, after being seeded on the surface, began to migrate towards the deeper portions of the scaffold. Lastly, the cultured cells’ expression of collagen IV and laminin, two key proteins deposited by this cell type in vivo, also increased throughout the experiment.

eFMs were successfully biofunctionalized through surface modification and subsequent immobilization of fibronectin, one of the major thymic ECM components. The FN-eFMs proved to be a suitable substrate for the culture of TECs, allowing cell adhesion, proliferation, and migration, together with the production of thymic ECM proteins such as collagen type IV and laminin. Overall, this study demonstrates that TECs showed an increased performance when cultured on 3D biofunctional structures than when cultured over 2D ones.

More research like this is sorely needed in the field of regenerative medicine. The effects of thymic involution may not be felt as directly as heart or liver failure, but it plays a large role in the progression of aging, including senescent cell accumulation and cancer. However, the results of this particular study should not be overstated. The researchers’ biomaterial (electrospun polycaprolactone functionalized with fibronectin) is potentially useful for thymus regeneration, but only minor improvements were seen relative to 2D culture on fibronectin and 3D culture on polycaprolactone without fibronectin. Additionally, seven days is a somewhat short length of time for cell cultures. While further culturing may have resulted in greater differences, that question remains unanswered. Finally, it is also unknown whether this biomaterial is an improvement over previously studied biomaterials, such as collagen or decellularized thymus extracellular matrix. Overall, there is a lot of room to expand on these initial positive findings.