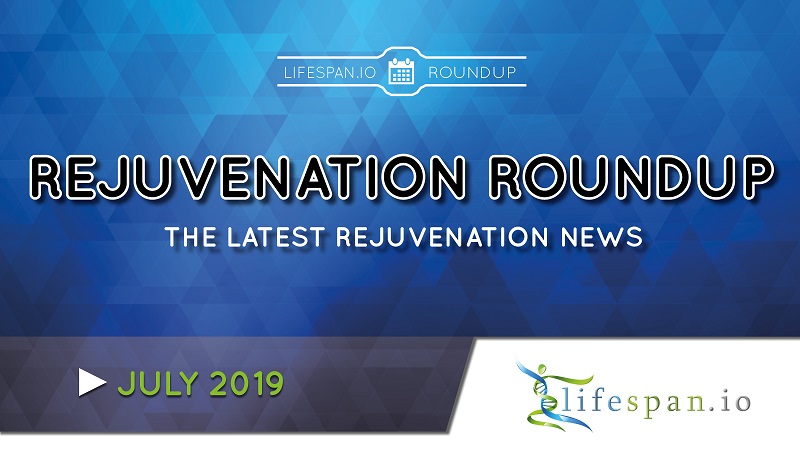 Last month was arguably the busiest of all for everybody on the LEAF team, given that our second NYC conference was taking place—and, by the way, it was a great success! Today, we’re offering a detailed account of the conference as well as all that has been going on with us in July, including, of course, a recap of the latest news from the aging research and rejuvenation community.

Celebrating Our Second Conference: Featuring quotes from attendees and presenters, this article showcases the proceedings, packed attendance, and value of Ending Age-Related Diseases 2019.

The Good Sides of Aging?: Giuliano discusses the relationship between wisdom and aging and why the popular misconception comes from a conflation of chronological and biological aging—which are two very distinct concepts.

How Well Does Giuliano Know Longevity History?: The duo hosts another quiz show; this time, Nicola quizzes Giuliano about the strange and entertaining history of efforts to extend human lifespan.

Can You Age Forever?: In an ancient Greek myth, Zeus curses Tithonus with eternal life but not eternal youth; in this episode, Giuliano discusses the ancient myth along with the true relationship between aging and fatal age-related diseases.

Please note that LifeXtenShow is now published on a biweekly schedule of every other Thursday; the next episode will be on August 8.

An Interview with Sergey Young: Sergey Young is a major financial contributor to rejuvenation biotechnology, being both the creator of the $100,000,000 Longevity Vision Fund and a board member of XPRIZE. In this interview, we asked Sergey about his new book, Growing Young: Simple Guide to Age Reversal; the upcoming Longevity XPRIZE; Longevity Vision Fund; and why he became interested in rejuvenation biotechnology in the first place.

An Interview with Dr. María Blasco: Dr. Blasco is the director of the Spanish National Cancer Research Center and leads its Telomeres and Telomerase Group. In this interview, we ask Dr. Blasco about her field of expertise, and this interview goes in depth about the role of telomeres in the longevity of various species—and what telomerase therapies might achieve for human beings.

An Interview with Professor George Church: Prof. Church is a very well-known rejuvenation and genetics expert, and his company, Rejuvenate Bio, is slated to test a canine therapy this fall. We interviewed him about the difficulties and potential of gene therapies that lengthen healthy lifespan in mice, dogs, and people.

The Rejuvenation Market in Singapore: Sarah Lim details the opportunities and problems involved in developing a rejuvenation biotechnology economy in this small, highly educated nation.

Geek Picnic 2019 (Moscow): Elena Milova took part in the biggest Russian popular science festival Geek Picnic. She gave a talk entitled “Demand for superlongevity: how many people on Earth are ready to crack the aging code”, and took part in a panel discussion “Ethics of biohacking”.

A Step Closer to Regenerating the Aging Thymus: Researchers have discovered what processes cause the thymus to involute and lose its ability to produce T cells, which may lead to a new approach to regenerating and reactivating it.

T Cells Infiltrate the Aging Brain: As we age, our brains are invaded by our own immune cells, which curtail neural stem cell development by expressing a signaling chemical called interferon-?.

A Link Between Telomere Shortening and Species Aging: As we also discussed in our interview, Dr. María Blasco and the Spanish National Cancer Research Center have discovered a strong inverse relationship between the lifespan of a species and the rate at which its telomeres shorten.

Elite Athletes Have Exercise-Enhancing Gut Bacteria: A new study has reported that the intestines of elite athletes contain a particular strain of Veillonella that digests lactic acid into beneficial proprionate, a strain that is absent in sedentary people.

Machine Learning Identifies Potential Anti-Cancer Molecules in Food: After identifying 110 naturally occurring molecules that may potentially fight cancer, a machine learning algorithm judged which foods contain the largest variety and quantity of them.

Astrocyte Senescence Leads to Neurotoxicity: Astrocytes are the most common type of glial cells, and when they age, they produce interleukin-6 and other signaling factors that are strongly associated with neurotoxicity, neurodegeneration, and Alzheimer’s disease.

Clinical Trial of Nicotinamide Riboside Completed: While the results of this limited clinical trial are somewhat inconclusive, it sheds new light on the effects of this NAD+ precursor in human beings.

New Rapalog May Lead to Better Caloric Restriction Mimetics: A new compound called DL001 targets the mTORC1 and not the mTORC2 pathway, which could possibly lead to a caloric restriction mimetic with fewer side effects than rapamycin.

New Method of Halting a-Synuclein Aggregation: By hijacking a form of intercellular communication called exosomes, researchers have discovered a way to use DNA aptamers to stop a-synuclein aggregates, the cause of Parkinson’s disease, from continuing to form.

FA!’s notes on Ending Age-Related Diseases 2019: Reason, the author of the Fight Aging! blog and co-founder of Repair Biotechnologies, has attended our conference as a speaker and has summarized the experience in this blog post.

UNITY to launch Phase 2 senolytic human trial: UNITY Biotechnology recently successfully completed the Phase 1 trial for its candidate senolytic drug UBX0101 for the treatment of osteoarthritis of the knee and has now announced a larger Phase 2 trial starting later this year.

Samumed published preclinical data for potential AD treatment: In mid-July, Samumed announced the publication of preclinical data about its candidate drug SM07883, indicating it as a potential treatment against Alzheimer’s disease. The data show that the drug is able to inhibit tau pathology and associated neuroinflammation.

The Hallmarks of Aging at LLL: The team at LongLongLife has published more videos of their series on the hallmarks of aging; this month saw episodes on mitochondrial dysfunction, deregulated nutrient sensing, and cell senescence.

Coming up in August

Biohack The Planet: On August 31 to September 1 in Las Vegas, the Biohack The Planet conference will take place, bringing together a variety of speakers to talk about science, biotechnology, and the future. Among the participants are Future Grind and Rejuvenation Roundup Podcast host Ryan O’Shea and SENS Research Foundation CSO Dr. Aubrey de Grey.

Basel Life: While this conference will take place on September 9-12, this is an event not to be missed, and ticket prices are going to rise on August 16. Held in the Congress Center Basel in Switzerland, this conference will feature talks from researchers across all three of these fields, bringing them together to promote the development of next-generation therapies.

Thanks to all our readers for making us part of their month once again, and special thanks to the Lifespan Heroes, who make LEAF and all its initiatives possible in the first place. If you’d like to help us push the cause of healthy life extension forward, please consider becoming a Hero yourself.