ALEC is a new open access research tool for lifespan comparisons in mice. Dr. Leon Peshkin talks us through a new open access research tool he has helped to develop and which is free for researchers to use now.

If a drug increases lifespan in mice by 15%, should I take it?

The idea of intervention testing in a model organism is simple: while keeping all conditions equal, test whether animals subjected to an intervention show a statistically significant difference in lifespan compared to a control group. An intervention could be a particular drug, caloric restriction, a diet of different nutrients (e.g. more protein), a change in feeding regime, etc.

The aim of such experiments is not to directly search for an elixir of life but to use previously characterized molecules as exploratory tools in order to find out which biological processes control healthy lifespan.

The key aspect of these tests is treating and observing the studied animals for a substantial part, if not the entirety, of their respective lifespans. A single instance of a dog living to 30 years or a mouse living for 5 would, in itself, be sensational. When lifespan changes slightly, say an extra 15%, we need data on hundreds of animals. But 15% in comparison to what?

During my compulsory service in the Russian army, I briefly picked up the habit of smoking. Smokers were excused for frequent breaks, while the rest had to keep doing hazardous tasks, such as fixing sewage pipes, moving heavy equipment, and applying toxic paint. My peers got injuries and chronic respiratory illnesses.

In retrospect, a brief episode of chain smoking would appear to have had a substantial benefit within our “cohort”. Baselines matter! Reporting life extension in sick mutants, or animals kept in suboptimal conditions, has very different implications from a study involving a healthy control group. 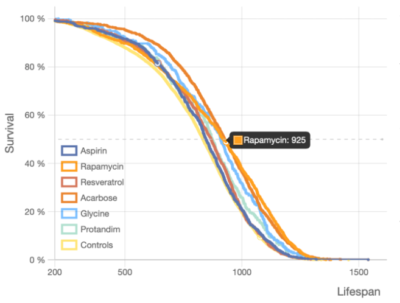 Take a close look at these so-called lifespan curves, each of which shows a surviving fraction of a cohort as a function of time, always going from 100% to zero. The precise shape of such a curve and slight differences between multiple curves tell us a lot about an intervention and its interaction with an organism.

This plot compares effects of several drugs from an Intervention Testing Program (ITP) in UM-HET3 mice [1]. It is meant to illustrate that the notion of “statistically significant” is not at all trivial. On one hand, rapamycin gave about 15% extra lifespan compared to controls. However, the same ITP data shows a 15% median lifespan difference between control male mice held at two different facilities in otherwise identical conditions.

Cross-checking the literature, we see that there are 20 papers on rapamycin in mice [3,4]. One shows a median lifespan increase of 8%, while another shows a 37% increase in the same strain/dose (128 ppm). Getting to the bottom of such differences would be crucial e.g. for Longevica, whose business is based on the outcome of another large intervention testing project: 1000+ compounds in B6C3F1/J mice over 3 years, tested in 15 mice per compound.

Longevica is looking to complement its own data with all the drugs ever tested in mice, creating an open research platform. In a separate effort, GeneAge and OpenGenes have been compiling data on all genetic interventions affecting lifespan.

A remarkable conservation across a wide range of species, from molecular- to organ-level processes, enables testing interventions in one species and generalizing the results to others. Such universality has indeed been observed: caloric restriction and rapamycin affect lifespans across species, from apes to flies. Alas, there are no perfect species – some are prohibitively expensive to use at scale, some live too long, and some only react to unreasonably high doses.

We have to do what we can; expensive animals are used scarcely, producing small (possibly not statistically significant) cohorts, while worms are subjected to extreme dosages when drugs crash out of solution. Our hope is that a big picture will come through when we combine reports of interventions in one species and closely related interventions in related species. Thousands of results of intervention testing for lifespan extension have been published to date [1-2].

When and where is such an integration supposed to occur? Agglomerating all the knowledge in the entirety of the relevant literature would be a superhuman feat. Perhaps artificial intelligence could help, but AI starts with computer-readable data, and current publishing practices are a long way from forcing scientists to express their premises and findings in a framework of constrained ontologies and logical predicates.

Someone has to marshal the sources and distill the literature into a uniform representation while working out a proper database schema. Early attempts [3-5] leave a lot to be desired. On top of the inherent discordance of the literature, the scope and quality of extracted information is very limited.

The same drug (caffeine), tested in the same strain of worms and at the same dose (7.5 mM), decreased lifespan by 12% in one study and increased it by 20% in another. It turns out that a drastically different temperature influences metabolism, but this was not reflected in the baseline data. Baselines matter!

A system focused on baseline data

All this underscores a need for a system that contains detailed baseline data on model organisms and control conditions in order to allow us to contrast the controls used in a given paper to others reporting on the same strain and to verify that the lifespan follows the same distribution.

Rich data on control groups’ lifespans will provide answers. What are the longest and shortest living strains of mice? How does temperature affect the lifespan of worms? Which husbandry conditions produce the longest lifespan in certain species?

To address this need for a data repository and an open research platform, Dr. Leon Peshkin conceived ALEC – Animal Life Expectancy Comparisons – a lifespan data browser whose application depends on the data it is populated with.

The most challenging and expensive part of the project will be data extraction and curation. A pilot site is already populated with a substantial seed dataset kindly provided by the ITP [1]; it is hosted by Lifespan.io and available for interactive exploration, and there are multiple illustrations of what can be uncovered within ALEC.

This pilot effort, spearheaded by Leon Peshkin and Olga Spiridonova, is focused mainly on lifespan in controls across species and strains. Longevica and OpenGenes can now develop GitHub-style branches of the ALEC platform. Leon came into Systems Biology from the Artificial Intelligence and Computational Linguistics background to inform computational methods with biological insight and help advance the state of probabilistic modelling and data analysis in biological medical research. His passion is understanding the root causes of aging and unlocking nature's mechanism for longevity and reversal of age-induced damage. Cancer, Alzheimer's, most other things we die of are the symptoms of underlying condition which must be cured - aging.