What is Pterostilbene? Benefits and Side Effects 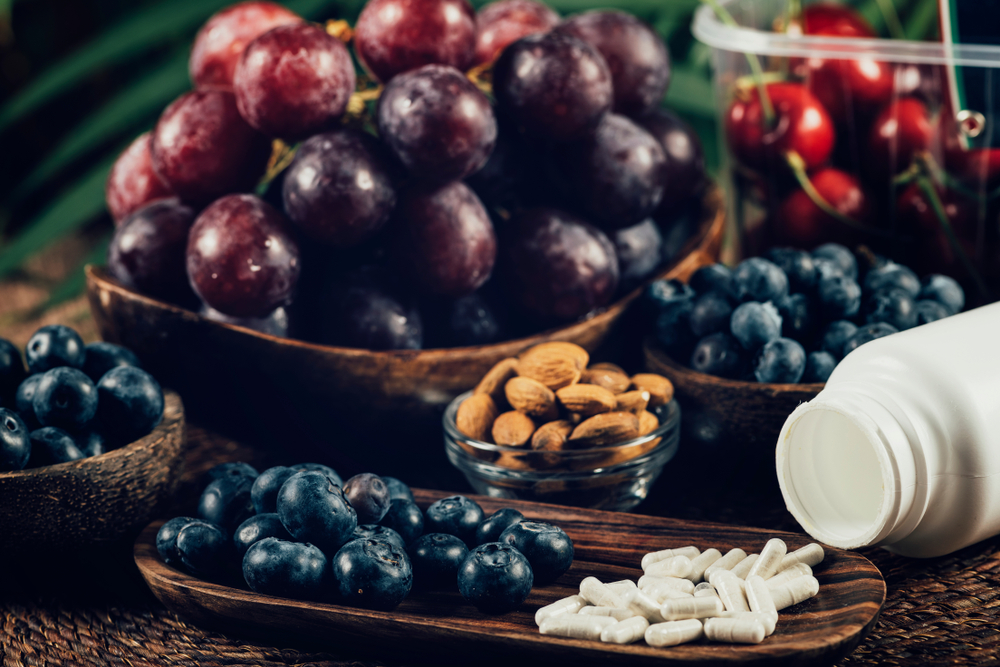 Pterostilbene (trans-3,5-dimethoxy-4-hydroxystilbene) is a naturally occurring polyphenol, a type of molecule that occurs in plants. It is part of the stilbene group of compounds and the main antioxidant component of blueberries. In plants, it serves a defensive antimicrobial and often antioxidative role.

It was first discovered in 1977 by Langcake and Pryce and has been studied for its antioxidant properties and potential health benefits [1].

What foods are high in pterostilbene?

Pterostilbene is found in blueberries, with the estimated content per blueberry varying between 99 ng to 520 ng, depending on the type of blueberry [2-3]. To put this into perspective, an average blueberry punnet weighs around 340 grams.

If you ate the entire punnet, the total amount of pterostilbene you would get is only 0.03 to 0.18 mg, and based on the dose used in limited human studies of 100mg a day, that would be a huge amount of blueberries a day!

However, if you are looking to naturally obtain the kind of levels of pterostilbene that dietary supplements offer, then you would really, really, need to like blueberries, not to mention the high cost of buying that much fruit. In realistic terms, this is impractical. Supplement dosages range from 50 mg to 1,000 mg per capsule.

Pterostilbene is also found in almonds, grape leaves and vines, cranberries and related Vaccinium berries, such as lingonberries, bilberries, and huckleberries.

Which is better resveratrol or pterostilbene?

Pterostilbene has more bioavailability than resveratrol and other stilbenes due to two methoxy groups, which cause it to exhibit increased lipophilic and oral absorption [4]. In animal studies, pterostilbene was shown to have 80% bioavailability compared to 20% for resveratrol, suggesting that it is a superior choice [5].

So far, the data for pterostilbene looks promising, but it should be noted that it has significantly less research than resveratrol.

Studies have also shown the potential of pterostilbene in relation to neurodegenerative conditions such as Alzheimer’s disease. A study on mice with accelerated aging showed that pterostilbene, even in low doses, has a significant effect on improving cognitive ability [14].

While not unique to pterostilbene but important to mention, pterostilbene activates AMP-activated protein kinase (AMPK), a master regulator of cellular energy homeostasis. AMPK is one of the two catabolic signaling systems, the other being sirtuins; these two work together in a feedback loop and signal nutrient scarcity [18]. These systems are part of our energy metabolism, and deregulation of that system is thought to be one of the reasons we age.

Increasing these two pathways favors health and longevity (on the other hand, the IIS and mTOR pathways reduce lifespan when their levels are increased). In combination, AMPK and sirtuins sense low energy states by detecting high AMP levels and high NAD+ levels, respectively.

Pterostilbene is considered safe, and no adverse effects have been reported up to a dose of 250 mg per day. However, some people may experience increased LDL cholesterol when using it. Given this compound is commonly found in food, dietary levels of pterostilbene should be safe.

That said, pterostilbene has few human studies compared to resveratrol and could potentially interact with other medications in ways not yet known. Caution is advised at the higher doses provided by supplements, as these greatly exceed typical dietary intake. If you do decide to take it and experience any adverse effects, cease taking it immediately and consult your doctor.