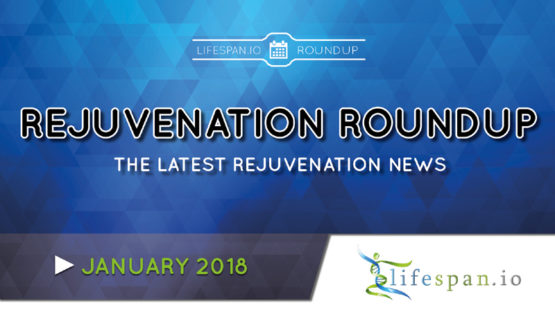 The first month of the new year is already behind us, so it is time to sit down and look back at what happened in the rejuvenation world during January; thankfully, there’s plenty of good news to talk about!

Healthy aging is back in WHO’s agenda

You might recall that late last year, LEAF board director Elena Milova wrote about our concerns about WHO’s decision to leave out healthy aging out of its draft programme of work 2019-2023. Luckily, thanks to the efforts of the longevity community, this danger has been averted; as we mentioned in the December 2017 roundup, the vast majority of the feedback that WHO has received through the open consultation on its programme stressed the importance of including aging in the draft. As a result, WHO revised its draft, which now includes several provisions on healthy aging, as discussed here. This is indubitably a great achievement of all longevity activists and proves that we can have an influence on public opinion and policymakers. We’d like to thank each and every person who helped us get there!

You probably recall our excitement last December about the $1 million bitcoin donation made by the anonymous donor running the Pineapple Fund, which pushed SRF’s winter fundraiser well beyond its initial $250,000 goal. You can imagine our (and SRF’s!) amazement when we found out that their digital-currency good fortune didn’t stop there; one more million dollars in bitcoin was donated to SRF by another anonymous donor, and another $2.4 million in Ether were donated by Vitalik Buterin, the cofounder of Ethereum and Bitcoin Magazine. Together with the other winter fundraiser donations, this amounted to a whopping $5,041,134, which makes for a fantastic (late) Christmas present for SRF!

We’re not done congratulating them yet, because SRF was also one of the winning charities of Project4Awesome 2017, as officially announced by John Green in this video. LEAF was not among the winners of this year, but we’re nonetheless extremely happy and excited about the huge increase in popularity of life extension and the large exposure the movement as a whole is gaining!

A digest of articles from FA!

In this article, veteran rejuvenation advocate Reason of the blog Fight Aging! discusses a study suggesting that there comes a point in middle age when exercising cannot reverse the adverse effects of a sedentary life any longer. While exercising yields benefits at any age, and in this sense it’s never too late to get off the couch, some aspects of secondary cardiac aging—that is, consequences of external factors that negatively affect your heart—won’t be undone by exercising when it’s too late. Still, you should always exercise if you can in order to slow down health deterioration.

While most of the damage occurring to our DNA is quickly taken care of by efficient repairing mechanisms, some damage slips through the cracks and manages to accumulate over time. Some of this damage may lead to cancer, but does the rest of the damage matter for aging? Here, FA! points out a paper that puts more weight on the degree to which such damage is replicated, rather than just its occurrence.

In case you haven’t been following the blog too closely lately, here’s a selection of our articles that you may want to go back to have a look at.

Volunteer writer and biomolecular engineer Ariah Mackie discussed deregulated nutrient sensing—one of the hallmarks of aging—in this article. If you want to deepen your understanding of the biology of aging, you should check this one out!

In occasion of his birthday, LEAF President Keith Comito made a present to the life extension community—a video to recap our achievements of the past year and whet our appetite for what’s to come in 2018.

If you’re still among those who are undecided between aging as natural or a condition to be treated, this article by Steve Hill may solve your conundrum, explaining how aging is actually both.

We interviewed Drs. Michael and Irina Conboy on the topic of parabiosis to shed some light on what rejuvenative benefits we can expect from filtering old blood.

Did you know that your thymus, a tiny organ responsible for the creation of new immune cells, starts turning into fat shortly after your birth? Finding out how to rejuvenate it is crucial if we want to avoid immunosenescence with age. We discussed the topic here.

The biotech Valley of Death

The folks at Geroscience wrote about something I’ve often noticed myself and surely you have too; all too often, we hear about some new, thrilling biomedical breakthrough only to never hear about it again. This may induce people to remain skeptical about, and at times even show contempt for, research news. (If you’re a Reddit user, you are probably accustomed to cynical comments along the lines of “here’s Reddit’s weekly cure for cancer” on any news on cancer discoveries, for example.) In this video interview, Geroscience’s lead editor Tegan McCaslin and venture capitalist James Peyer discuss what happens when new discoveries reach the “biotech Valley of Death” and the hurdles that make it difficult to leave that dreadful place.

On February 2, we will host the premiere of the new Netflix series Altered Carbon, showcasing the dark and dangerous world of Takeshi Kovachs, where only the wealthy can re-upload their digitized selves from one clone to another forever. You can have a look at the series’ trailer here.

SENS Research Foundation’s CSO Dr. Aubrey de Grey will be attending the event and hold a Q&A session right before the show. We will also be offering themed drinks and snacks, and there’ll be a chance to mingle with other fans of the series, so don’t miss out! You can find more information and get your tickets here. The event’s revenue will go towards supporting LEAF/Lifespan.io.

In occasion of the late longevity record holder Mme Jeanne Calment‘s birthday, on February 21, we will host a panel with the MouseAge team on the topic of artificial intelligence in aging research—more details to come. On the same day, due to a suggestion by LEAF volunteer Victor Bjoerk, The Longevity Reporter will host a Facebook event where all participants are invited to show their support for aging research by taking a selfie with Mme Calment’s favourite foods—chocolate and olive oil.

It is our custom to have a Journal Club every month as part of our Lifespan Heroes program, but, unfortunately, January saw us encounter a problem at Cooper Union University, from where the stream is broadcast and presente. This meant that we had to move the scheduled broadcast from January 30th to the 6th of February at 13:00 EST; yes, that’s right, folks, the January Journal Club is in February. On the plus side, it also means there will be two journal clubs in February, as the regular one will also happen on February 27th as normal live on our Facebook page.