This initiative seeks to prioritize rejuvenation biotechnology for the problem of European aging. 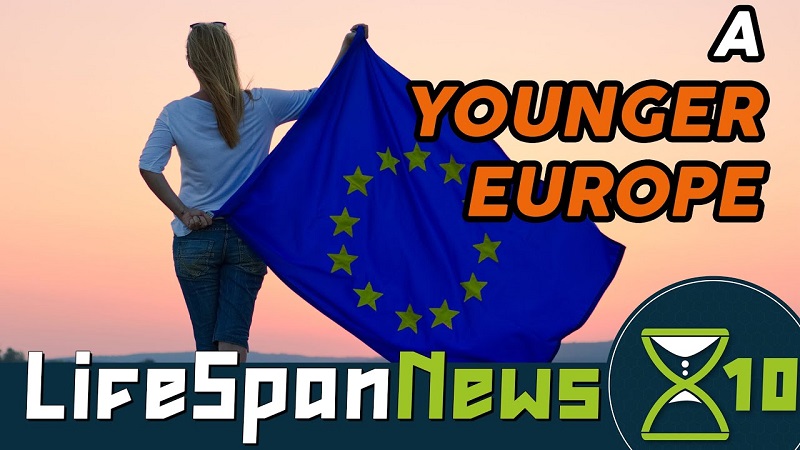 This week on Lifespan News, Brent Nally discusses the European Longevity Initiative, the effects of spermidine on cognitive function, diet and exercise to reduce epigenetic age, B-cell depletion for ameliorating Alzheimer’s, and RNA deep sequencing that monitors the progression of Parkinson’s disease.

EU Green Paper on Aging Falls Short of the Mark

A human aging population creates many societal challenges, so what has The European Longevity Initiative proposed as a solution? We’ll have this story plus four other stories in this episode of Lifespan News.

Continuing with our first story, The European Longevity Initiative proposed an actionable plan to address the challenges of an aging population. The European Longevity Initiative, or ELI, is an advocacy group working to promote legal, budgetary, regulatory and institutional support for the development of healthy longevity technologies in the European Union, or EU. Recently, the ELI has provided a commentary on, and proposed amendments to, the EU’s Green Paper on Aging, with which the EU has launched a 12-week public debate initiative on long-term, sustainable policy choices to address the challenges of the present demographic change. The ELI argues that, while commendable, the wish expressed in the Green Paper to enable healthy or active aging for all is indeed just a wish, unless the possibilities offered by geroscience are taken into account. In the commentary, the ELI explains how the Green Paper seems to ignore the well-established role that the processes of aging play in the deterioration of people’s health, as well as the current mainstream scientific view that aging is a process amenable to medical intervention and can possibly be slowed down, halted, or even reversed. ELI argues that it’s only by taking these facts into account that the problem of an aging population can be tackled. In addition to the ELI’s critique of the Green Paper, ELI members proposed a change of policies that ELI believes the EU should adopt if the EU is indeed serious about addressing the problem of human aging. Their proposals involve commitments at different levels, such as: the acknowledgement of geroscience as the way forward to treat aging and the pathologies it leads to; budgetary commitments to foster research on and development of therapies to target the aging processes; regulatory commitments to greenlight EU-wide, large-scale clinical trials for geroprotective interventions; and institutional support in the form of a European Institute for Healthy Longevity Research. We have a link to the detailed ELI commentary in the description below. You can also show your support for this initiative by voting for the ELI proposal which is also linked in the description.

For our next story, spermidine improves cognitive function in flies, mice, and humans. Spermidine is a compound found in many tissues and in ribosomes. Spermidine is known to decline with aging, and spermidine treatment increases lifespan in lots of species. In a new study, researchers tested the effect of spermidine provided via drinking water rather than injection. The researchers found that spermidine crossed the blood-brain barrier and improved the cognitive performance of 24-month old male mice. There was less improvement when the mice got a higher dose, so dose-response experiments could be useful. The researchers were able to show that spermidine improved the respiratory capacity of tissues in mice and fruit flies and that this effect happened via changes in autophagy. Finally, the researchers looked at an existing dataset measuring the cognitive function in humans. The researchers found that spermidine intake – based on self-reported diet – correlated with measures of cognitive performance and reduced the odds of cognitive impairment. This study improves our understanding of spermidine as a potential therapeutic agent; but it’s important to remember that correlation is not the same as causation. Other factors could be at play in the human dataset despite the researchers’ efforts to control for them.

A conventional dietary, exercise, sleep, and breathing regimen showed reduced epigenetic age in an eight-week human clinical trial. Epigenetic age was reduced by approximately two years in males between the ages of 50 and 72 in this study which examined entirely conventional and widely recognized methods of improving health among elderly people. Participants ate daily diets heavy in leafy greens, broccoli or other cruciferous vegetables, colorful vegetables, and beets, along with 6 ounces of animal protein, two servings of fruit, daily probiotic supplements, healthy oils, and methylation adaptogens such as green tea or oolong tea. Every week, three servings of liver and 5 to 10 eggs were included. Dairy, grains, legumes, and sugar were all excluded. In addition, moderate exercise of 30 minutes each weekday was also part of the regimen, and participants had to get at least seven hours of sleep a night. Participants were also told to perform a special breathing regimen for relaxation twice a day. The researchers then measured the participants’ age using the original 2013 Horvath DNAmAge epigenetic clock and compared them with a control group. While there was a good deal of variability, the average age of the treatment group was about two years less than in the control group. Interestingly, the average age of the control group went up by a year over the study, even though the study only lasted eight weeks. As with most studies of this kind, this study could have strongly benefited from more participants, particularly since the results of the DNAmAge clock fluctuated so strongly. There’s also no guarantee that the benefits would last after the interventions stopped, and given the intensity of the intervention, it would probably be challenging to maintain over the longer term. Nevertheless, some people are interested in adopting a healthy lifestyle, and this study makes the usefulness of this approach more clear.

Moving on, B Cell depletion ameliorates Alzheimer’s in mice. A new study links Alzheimer’s disease, or AD, with inflammaging, leading scientists to propose B cell depletion as a possible therapy. One of the hallmarks of AD is the accumulation of Amyloid beta, or Aβ, plaques in the brain, but there’s an ongoing debate about whether Aβ plaques in the brain are a symptom or a cause of AD. So far, targeting those Aβ plaques directly has only managed to slow down AD’s progression. Now, researchers delved into the role B Cells play in AD. The researchers used mouse models that have been engineered to recapitulate the symptoms and progression of AD. Because the number of B cells correlates with progression of AD, the researchers tested the effect of genetically depleting B Cells. The result was improved cognitive performance and fewer Aβ plaques. Next, the researchers tested whether therapeutically depleting B Cells could have the same effect. It worked as long as the therapy began at the onset of AD. The researchers think that inflammaging might make B Cells attack the microglia that normally work to clear out Aβ plaques. Supporting this, there were fewer microglia in AD mice, and B Cell depletion increased the number of microglia and reduced Aβ plaques load. Whether or not B Cell therapy turns out to be an effective approach, showing a link between AD and inflammaging offers a path to treatment via other therapies that target inflammaging.

For our final story, RNA deep sequencing uncovers Parkinson’s progression. A massive RNA sequencing effort has identified changes in microRNA associated with Parkinson’s. Some of the changes correlated with Parkinson’s disease progression, holding out hope that they could be useful as prognostic or diagnostic biomarkers to help guide research and evaluate potential therapies. The progression of Parkinson’s can vary considerably, and the interplay of genetic and environmental factors driving this remains poorly understood. The inability to properly track Parkinson’s has hampered the development of an effective therapy. Using RNA sequencing of samples from a large cohort, researchers identified microRNAs that could serve as Parkinson’s biomarkers. The researchers then analyzed RNA sequences from thousands of patients in the Parkinson’s Progression Markers Initiative dataset with different types of Parkinson’s. The researchers included the initial samples as well as follow-up time points so they could study Parkinson’s progression. The analysis uncovered a set of microRNAs that are dysregulated in Parkinson’s patients. The dysregulation occurred in two waves: one in patients in their 30s and another in their 70s. The researchers also identified changes in microRNA that correlated with disease progression, differing between patients in whom Parkinson’s progressed quickly and those in whom Parkinson’s remained relatively stable, as well as distinguishing between different types of Parkinson’s. Finally, the researchers mapped these microRNA changes to networks of messenger RNA in order to get an idea of the resulting changes in gene activity and discover which processes were affected. Though more work is needed to determine whether the microRNA changes meet the criteria for serving as biomarkers, the data from this study will be an invaluable resource in guiding future research on Parkinson’s, whether to understand Parkinson’s biology or to develop potential therapies.

That’s all the news for this video. Before you go, there’s a few quick, free and simple things that you can do to help us solve the human aging problem. First, make sure to like this video and make sure that you’re subscribed with the bell icon turned to “All Notifications”. Then, please share this video on your social media. This helps inform more people about the importance of healthy human life extension science. Is there a recent life extension story that we haven’t covered yet that you think we should have? And what was your favorite story from this video? Let us know what you think in the comments below. We really appreciate it and we look forward to seeing you in the next video at least as healthy as you are now.